Approvals were given to Teollisuuden Voima Oy (TVO), for a fourth reactor at Olkiluoto, and to Fennovoima for a one- or two-unit plant in the north of the country. The third proposal, by utility Fortum to build a new unit at its Loviisa site, was denied. The decision to build the two units must now be approved by parliament, which will process what is being deemed the nation’s most important decision this term in May. A final vote is expected this summer.

Finland’s four existing reactors (2,696 MWe net total) generated a record 22.6 billion kWh net in 2009, 27.8% of the country’s electricity. They are among the world’s most efficient, with average capacity factors reaching 94%, according to the World Nuclear Association.

TVO said it was ready to proceed as soon as the project had parliamentary approval—though the utility did not divulge the reactor design it would employ. “We have an excellent plant site in Olkiluoto for a fourth unit,” President and CEO Jarmo Tanhua said in a statement. “The organisation and everything else needed for the implementation of the project is already in place. Hence we can launch the construction process smoothly as a continuation to the Olkiluoto 3 project.”

TVO, whose owners include utility Pohjolan Voima and Fortum, is currently building Finland’s fifth nuclear reactor along the western coast at Olkiluoto—a project whose commercial operation in the second half of 2012 is much-anticipated because it would be the world’s first EPR. The building of Olkiluoto 3 has fallen well behind its original schedule by more than three years, however. The delays have led to ballooning costs, which in turn have spurred a bitter contractual dispute between TVO and the plant’s builder, AREVA. The parties have taken the matter to the International Chamber of Commerce.

In the meantime, Fennovoima, a consortium of 64 shareholders that will be the first new company to enter the Finnish nuclear power business in 36 years, said it was considering two sites in northern Finland: Simo and Pyhäjoki (Figure 3). Studies have been conducted at both sites. If the decision-in-principle is granted by Parliament, the firm will choose a final site in 2011 and begin the permit and construction phase in 2012. The power plant is expected to begin operating in 2020 at the latest, Fennovoima said. It is also considering several reactor designs, including AREVA’s EPR and KERENA, and the ABWR by Toshiba. 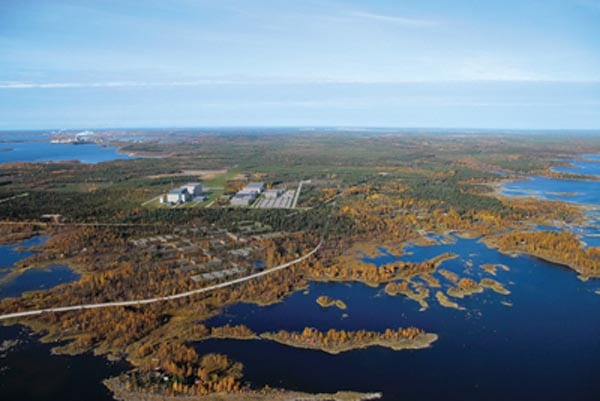 3. New nuclear for Finland. The Finnish government approved two of three proposals to build new nuclear plants in that country. TVO—owner of the EPR project under construction at Olkiluoto, which is way behind schedule and over budget—plans to build a fourth unit at that site, though it has not divulged the chosen reactor design. Fennovoima, meanwhile, is considering two sites in northern Finland: Simo and Pyhäjoki. That firm has said it is considering AREVA’s EPR and Kerena and the ABWR by Toshiba. This image is an artist’s depiction of a potential Fennovoima plan for an ABWR at Simo, Lapland. Courtesy: Fennovoima