Mark Twain summed it up best when he described India more than a century ago as a place of “fabulous wealth and fabulous poverty.” Today, for all its surging economic growth, 300 million Indians still live below the poverty line—73% of these in rural villages, according to the Ministry of Rural Development. And, though multibillion-dollar plans for grandiose mega-sized power plants are in the pipeline, about 20% of India’s 600,000 rural villages and 78 million households still have no electricity.

The central government has acknowledged that these numbers are dismal compared to the statistics for other countries with similarly large populations. Declaring electricity to be a “basic human need,” it launched in April 2005 the Rajiv Gandhi Grameen Vidhyutikaran Yojana (RGGVY), a 1.76 trillion rupee ($34 billion) rural electrification plan with the ultimate goal of providing “power for all” by 2012. Already, the plan’s lofty goal to electrify 125,000 villages and provide free power for 23 million households below the poverty line by March 2009 is far from being met; as of January 2009, only 55,000 villages had been electrified, according to the Central Electricity Authority.

Yet, the program has made significant progress in waiving licences and incentivizing installation of distributed generation systems, which industry experts agree will be critical to India’s expansion of electricity service. The Ministry of Power estimates that at least 18,000 villages in remote and inaccessible areas where the extension of the grid is uneconomical could benefit from distributed generation technologies, including wind turbines, micro-turbines, biomass, solar photovoltaic, and hybrid systems.

The Electricity Act of 2003 also simplifies construction and operation of captive and “group-captive” plants (a form of operation in which a group of promoters and/or consumers come together and jointly establish a captive power plant). To meet their own demand or provide quality electricity, industrial and commercial establishments all over India have already set up some 50,000 MW of captive and standby capacity, the Planning Commission estimates.

The 11th plan calls for of 5,000 MW of new distributed generation. With 12,000 MW of new capacity from captive plants also expected, opportunities will continue to flourish, says Finnish company Wärtsilä, which, over its 25 years of operations in India, has set up 3,200 MW and more than 250 decentralized power plants (see photo). 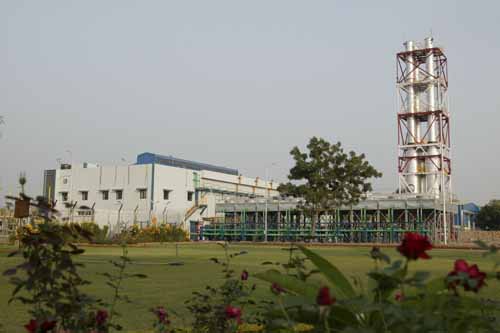 Swadeshi energy. The Gandhian doctrine of economic self-reliance (swadeshi) is thriving in several rural villages and among industrial and commercial establishments, which use distributed and captive power plant generation. Wärtsilä, which has set up a grid-connected 112-MW group captive power plant in Tamil Nadu (shown here), says the opportunities will continue to flourish. Courtesy: Wärtsilä