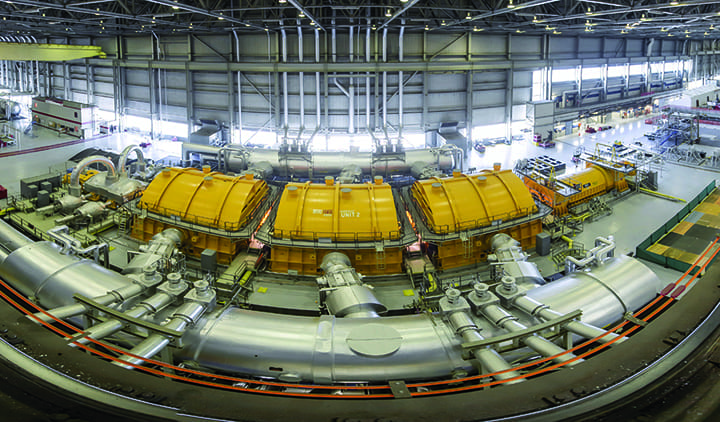 When construction of all four units at the 3.5-GW Darlington Nuclear Generating Station in Clarington, Ontario, was deemed complete in 1990, the project was hailed for deploying a larger 878-MW commercial model of the CANDU (CANadian Deuterium Uranium) system. A winning aspect of the heavy-water moderated power reactor developed in Canada is that refurbishment is configured into its design—it is assumed to be required at the mid-point in its operational service life. In 2006, at the direction of the Ontario government, Ontario Power Generation (OPG)—a corporation wholly owned by the province—began assessing the feasibility of extending the four reactors’ lifetimes, which were slated to end in the early 2020s.

Following an initial feasibility study, OPG in 2010 delved into detailed planning to refurbish the four units. It assessed, for example, how to keep the plant open during the prospective project without disrupting the regional power supply, and designed new facilities for training, processing, and storing materials. In January 2016, the company moved definitively to execute the refurbishment. It posited, presciently, that extending the units’ useful lives to 2055 would give Ontario a foothold in what it saw was relentless movement toward decarbonization. The company proposed a massive C$12.8 billion project that would be implemented in phases over 112 months: Work would begin with a 40-month project to overhaul Unit 2 by February 2020; then Unit 3 by 2023; Unit 1 by 2024; and finally, Unit 4 by 2026.

Pivotal to the project was picking the right contractors. The bulk of the full project’s work—to include removal, replacement, and repair of core components, along with maintenance and refurbishment of turbine generators—is led by a joint venture comprising SNC-Lavalin Nuclear and AECON Construction Group. OPG, notably, selected the joint venture through a competitive bidding process in 2015 after terminating a contract with another company, which it had hired in 2013 to build a heavy-water storage and drum handling facility (a major component that is used to safely store and process radioactive heavy water that is extracted from reactor units as they are being refurbished). Other key contractors for the ongoing project include ES Fox for the supply and installation of replacements for the main components of the fueling machine power track system. GE (formerly Alstom) will supply equipment and provide technical services for refurbishment of the turbine generators. BWX Technologies (BWXT) will conduct inspections and maintenance of the station’s steam generators, as well as remove fuel from each reactor core.

A Stream of Major Milestones

In the end, the six years OPG spent on detailed planning and preparations were crucial to bringing Unit 2 back online within the planned 40 months. OPG and its contractors split the work into five segments.

Defueling and Islanding. Before disassembling a CANDU reactor, it must be disconnected from the grid. “But shutting down the unit is not just a matter of pulling a plug,” OPG noted. After shutdown in October 2016, the process involved cooling the reactor, defueling it, installing barriers to isolate the unit, and then draining the heavy water.

Preparing for Reactor Component Removal. This segment involved opening the airlocks—for the first time since the plant was built in the early 1990s—and installing shielding, as well as removing interferences and installing the work platform. Critically, it also involved removing the unit’s 960 feeder pipes, which carry the coolant required to cool nuclear fuel.

Disassembling the Reactor Core. Starting in December 2017, all 480 pressure tubes were removed. In March 2018, work then moved to releasing the 960 calandria tube inserts (CTI) and, after that, to removing the 480 calandria tubes themselves. “CTIs are released from the tube sheet by means of induction heating using the CTI release tooling. During the process, the CTI is shock-heated [to 1,100C] for 2.2 seconds to reduce the insert diameter by approximately a sixteenth of an inch,” OPG explained. The work, which was entirely automated by millwrights and boilermakers from a remote control center, benefitted from a new production planning tool the team developed that was used in other work as well.

Work then progressed into assembly of the unit’s 480 fuel channels. “Each fuel channel requires a fuel channel subassembly, consisting of a pressure tube made of zirconium, two stainless steel end fittings, and four annulus spacers, which play a critical role in maintaining the gap between the pressure tube and calandria tube. This ensures there is no contact between the components,” OPG said. The fuel channel installation work series, which OPG described as “one of the most complex phases on the project,” wrapped up in April 2019.

Along with these new components, OPG notably also added a third, more robust emergency power generator and updated fire protection systems. “Our refurbishment-related overhauls and replacements mean greater reliability from both an operational and safety perspective,” said Dietmar Reiner, chief project officer. “It will ensure Darlington remains among the best in the nuclear industry through its extended life.”

Loading Fuel, Testing, and Restarting the Reactor. By June 2019, the team had inspected fuel bundles that were sequenced and packed by BWXT, and were readying for fuel load. The process required the manual loading of 6,240 new fuel bundles into the actual reactor, according to a serialized numbering sequence, OPG said. Construction was finally deemed complete in late March, 2020. After a restart process, the refurbished unit reached first criticality in April, and it returned to full service in June.

A notable aspect at Darlington that bolstered the refurbishment project’s detailed planning and preparation is a distinctive training facility (Figure 1), where highly skilled workers can perform full “dress rehearsals” to practice using the more than 400 specialized tools developed by Ontario manufacturers to remove and install components, as well as conduct inspections and repairs on the project. Among these tools is the “Re-Tube Tooling Platform,” a half-ton elevating work surface that is connected to four columns to allow it to move vertically across the reactor face.

“The integrated team undertook more than 765,000 training hours in the project’s leading-edge mock-up and training facility to safely shut down, defuel, disassemble and reconstruct the reactor,” OPG said. “This in-depth training enabled the team to practice complex tasks before performing them in the field, resulting in improved efficiencies.” 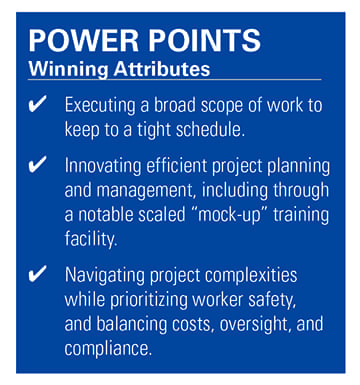 Because OPG is wholly owned by Ontario, every one of Unit 2’s 450 tasks were under scrutiny by an assortment of parties to ensure the refurbishment would stay on track to meet OPG’s January 2016–announced estimated total project cost of C$12.8 billion and schedule. External oversight came from the Canadian Nuclear Safety Commission, which oversaw project safety; the provincial Ministry of Energy, which represented Ontario’s government as OPG’s sole shareholder and monitored project status and performance; and the Ontario Energy Board, the province’s electricity regulator, which reviewed project costs. But OPG also had three internal oversight bodies, including a dedicated committee of board directors, a construction review board, and a senior management team. Keeping an eye on overall risks, meanwhile, was the Office of the Auditor General of Ontario, which scrutinized the company’s public reporting and compliance with applicable legislation and standards.

In a 2018 report—issued midway through the project—that office lauded OPG’s application of lessons learned from previous large construction projects and nuclear refurbishments to keep the project within its original time and cost estimates, but it warned final project costs remain uncertain. Despite impacts from the COVID-19 pandemic, OPG affirmed in an August 2020 investor briefing that total project costs continue to track the C$12.8 billion budget, and that the full project will be completed by the end of 2026.

The audit office also flagged a shortage of skilled trades, a risk that it warned could prompt delays, especially during the 2020 outage season, when OPG would be in competition with other nuclear plants. OPG indicated it took pointed action to address potential shortages by ensuring access to a sufficient pool of qualified trades. At its peak, the refurbishment project will require 11,800 workers per year across the industry, it said, and it has continued several programs to attract, retain, align, and develop qualified resources for the project.

COVID, notably, posed new workforce constraints that prompted OPG to postpone the start of the Unit 3 refurbishment by three months to May 2020. However, the company has resumed hiring of skilled trades workers to safely start this next phase on the project. Unit 2’s success, which provided more lessons on how to navigate challenges, is now also driving optimism for the remainder of the project. The milestone remains “a truly historic moment for Ontario,” as Ken Hartwick, OPG’s president and CEO, noted in June, as Unit 2 began producing 100% power. “I want to thank our refurbishment team, project partners, vendors and construction building trades workers for more than 24 million hours worked safely and for returning Darlington’s Unit 2 reactor to the grid at a time of unprecedented circumstances.” ■