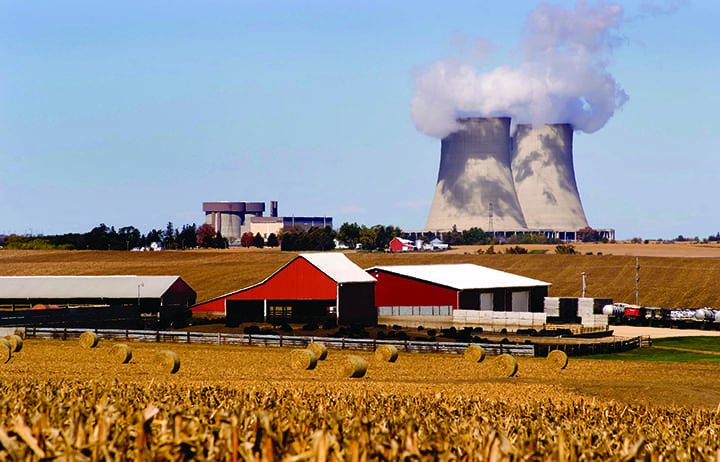 A focus on continuous improvement has helped the nuclear power industry shine in recent years. The U.S.’s fleet of nuclear reactors has achieved average capacity factors of more than 92% over the past five years. One facility that has really stood out during that time is Exelon’s Byron Generating Station—a 2020 POWER Top Plant award winner.

The U.S. Department of Energy has called nuclear energy “America’s work horse.” About a fifth of the U.S.’s electricity has been generated by nuclear power stations each year since 1990. Additionally, nuclear units are incredibly reliable. According to the U.S. Energy Information Administration, the U.S. fleet of commercial reactors, which today comprises 94 units at 57 plant sites, achieved an average capacity factor of 93.5% last year. For comparison, natural gas-fired plants achieved the next-highest capacity factor (56.8%), followed by coal (47.5%), hydro (39.1%), wind (34.8%), and solar (24.5%). Furthermore, the high output from nuclear units in 2019 was not an aberration. The average capacity factor for the U.S. nuclear fleet has been greater than 85% every year since 1999, and greater than 90% every year since 2012.

Byron Is Regularly Among the Best of the Best

Exelon Nuclear, a division of Exelon Generation, has the largest fleet of nuclear units in the U.S. It operates 21 reactors across four states: Illinois, Maryland, New York, and Pennsylvania. In 2019, Exelon’s nuclear fleet achieved a record capacity factor of 94.6%.

The Byron Generating Station is arguably Exelon’s best plant, and consistently among the best performing in the U.S. The facility is located on a 1,782-acre site near Byron, Illinois, which is about 90 miles west of Chicago. The station includes two Westinghouse pressurized water reactors, which are capable of producing net generation of 2,347 MW at the site. Byron Unit 1 entered commercial operation on Sept. 16, 1985, and Unit 2 did the same on August 2, 1987. The units are currently licensed to operate until Oct. 31, 2044, and Nov. 6, 2046, respectively. However, Exelon announced on August 27 that it intends to close the Byron station in September 2021 for economic reasons.

The Byron station has an extraordinary track record. Its capacity factor in 2019 was an impressive 96.9%. Unit 1 currently has three straight breaker-to-breaker runs, that is, periods of non-stop operation between refueling cycles, while Unit 2 currently has two straight breaker-to-breaker runs. As of Oct. 6, 2020, Byron had operated 4,724 consecutive days with at least one unit online (Figure 1). For those keeping score, that’s almost 13 years straight of continuous power generation.

According to site leaders, much of that success derives from detailed monitoring of plant equipment, and a robust plan to refurbish or replace pumps, valves, transformers, and other equipment prior to failure, while also updating older systems with more modern technology. The bulk of this work takes place during the station’s planned refueling outages, which occur on each unit every 18 months.

Over the past few years, the Byron station has installed new large power transformers with improved performance and monitoring capabilities on both units. Most plant control systems have been upgraded to modern digital control systems in place of the original analog components. Workers also installed automatic voltage regulators, replacing dated equipment with enhanced reliability and monitoring capabilities. The plant has conducted a complete overhaul of the internal structure of both natural draft cooling towers to further enhance cooling capabilities and ensure operation of the towers through the end of plant life.

Precise outage scheduling and sequencing of work has also resulted in fewer days offline. Byron’s last four outages on Unit 1 and last two on Unit 2 lasted an average of just more than 19 days. For comparison, the industry average is about 30 days, so the station’s turnaround time is truly impressive.

The maintenance department reportedly drives a strong sense of self-awareness and self-criticality throughout the organization. Each individual is said to be committed to the organization’s success, and openly questions the status quo and any shortfalls. This allows the team to find and correct issues at the lowest levels to sustain excellence in performance.

Byron’s People Are Key to Success

More than 700 people work at Byron Generating Station. The plant also partners with a diverse array of contractors that help crews on a wide range of projects, including turbine work, valve and pump refurbishments, and cooling tower inspections and repairs, among others. Site managers said Exelon works hard to create and maintain an organizational culture that values diversity and inclusion while accelerating the development of the company’s leadership pipeline.

“Our employees represent a wide range of technical disciplines. To ensure that our people’s skills and knowledge are continuing to develop, we leverage a combination of formal training and technical mentorship. The strategic partnership of subject matter experts with those newer to their roles provides the opportunity to share experience and institutional knowledge; learning that goes far beyond traditional coursework,” Byron Site Vice President Mark Kanavos told POWER.

The station has a large training department dedicated to helping new workers gain their initial qualifications, as well as ensuring longtime employees maintain their credentials. The staff comprises 30 personnel, who are responsible for training operators, technicians, and engineering work groups. The training curriculums for all operations, maintenance, and technical groups have been accredited by the National Academy for Nuclear Training and are evaluated every six years to maintain this accreditation from the Institute for Nuclear Power Operations (INPO).

Instructors are selected from a diverse population that offers a variety of experiences and education. More than three-quarters of Byron’s instructors are previous high-performing operators and technicians. The other quarter have nuclear training experience either from another plant or from the U.S. Navy’s nuclear power program. Additionally, every instructor undergoes extensive training to be qualified for their jobs. Annual evaluations are performed by the training management team to ensure each instructor’s performance is effective and meets the station’s high standards.

“Our training facility is kept up-to-date with the most recent technologies, and over the years we have upgraded our training facility to implement many different enhanced teaching techniques. There are multiple laboratories to support hands-on training, such as electrical, mechanical, instrumentation, as well as a virtual reality simulator,” Rob Lawlor, Byron’s senior manager of site training, told POWER.

“These hands-on environments are very advantageous to support knowledge transfer and retention with the changing demographics in our industry over the last five years,” Lawlor said. 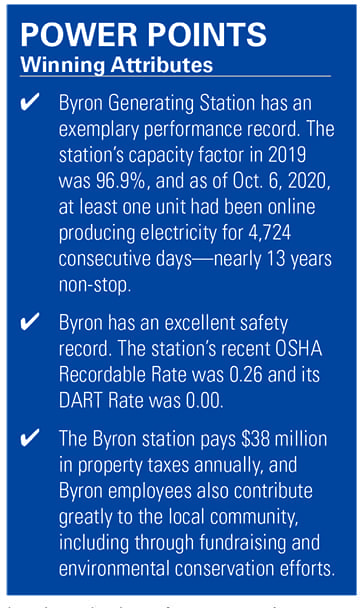 The nuclear industry uses standard Occupational Safety and Health Administration (OSHA) metrics to track safety performance. Some examples of the statistics tracked include Recordable Rates and Days Away, Restricted, or Transferred (DART) Rates. Like its fellow Exelon Generation facilities, the Byron station has an excellent safety record, including during refueling outages when the plant is supported by workers from outside the organization, who are often less familiar with the station’s safety procedures.

Many people may be surprised to learn that OSHA data shows it’s safer to work at a nuclear power plant than at a fast food restaurant. Furthermore, it’s much safer to work at Byron than at many other nuclear plants. Byron’s OSHA Recordable Rate as of Oct. 6, 2020, was 0.26, which compares quite favorably to the average private industry rate, which was 2.80. Even more impressive was Byron’s 0.00 DART Rate, which was far superior to the private industry average of 1.60.

“One initiative that has helped improve the safety culture is the COACH (Create Ownership and Change Happens) program, which is a front-line employee observation program. We conduct craft safety observations and peer-to-peer coaching certain days, and craft and management share the learnings. The program has been so positive it has branched out from our maintenance department into chemistry, radiation protection, and operations,” Welt said.

Byron Generating Station pays $38 million annually in property taxes, benefitting local schools and colleges, first responders, and forest preserve and park district budgets. In July, the station granted $9,000 to eight local libraries to help them buy new software and other equipment to produce online programming for users in response to the COVID-19 pandemic.

Plant employees even went a step further to help local families during the pandemic by conducting a fundraiser that collected $35,000 for nearly two dozen food pantries in northern Illinois. Each year Byron station employees contribute approximately $300,000 to charities and non-profits, including the United Way.

Over the past five years the Byron Generating Station’s “Conservation Club” members have worked tirelessly to be good environmental stewards. The group has planted 4,000 new trees on plant property, and set aside 175 acres where they have planted milkweed for pollinators and restored natural habitat. The club has also raised and released more than 750 pheasants and quail on the re-established areas. As a result of these efforts, the site and Exelon Generation were recognized by the National Wildlife Habitat Council for habitat restoration.