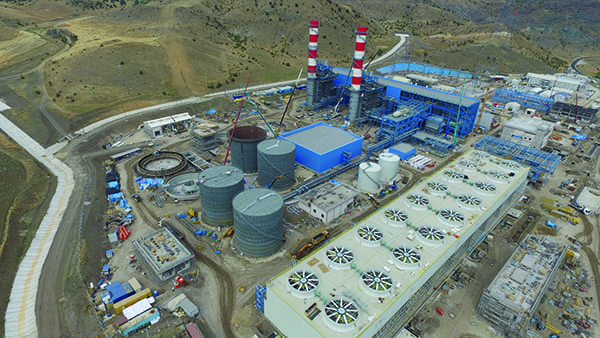 Turkey is a country in the midst of political and social turmoil. Its president, Recep Tayyip Erdogan, survived a coup attempt in 2016 and was re-elected in June of this year, but his rule has been questioned by other world leaders as he pushes a nationalist agenda that has alienated some foreign investors.

The country is mired in a recession. Its economy has not been able to keep up with years of heavy borrowing from international markets in order to build infrastructure to support a growing population, including more than 3 million Syrian refugees who were promised citizenship in Turkey as they fled their own country. The country’s currency, the lira, has been devalued, making debt repayments difficult.

Government data show the country has the highest rate of energy demand among Organization for Economic Co-operation and Development (OECD) member nations since 2000. It only in the past year reached a point where about half its electricity is produced domestically after years of importing the majority of its power.

Erdogan has publicly said 2,132 MW of capacity was added to the country’s grid last year, and said installed power generation capacity in the country grew from 32,000 MW to 83,000 MW over the past 15 years. Last November, speaking at a ceremony honoring those projects that came online in 2017, he said the country’s current energy plan “sets the target [by 2023] of producing 75 percent of the energy from domestic resources.”

The plant was inaugurated in November 2017 after entering commercial service the previous month. Abid Hussain Malik, managing director of ACWA Power in Turkey, at a ceremony hosted by Erdogan to commemorate the plant’s opening, said, “[The] Kirikkale project holds immense value to the Turkish community and its efficiency and design is testament to ACWA Power’s expertise in projects that provide reliable delivery of power and water at the lowest possible cost. The team has worked hard to meet the highest quality standards and utilize best practices. We are delighted to have played a vital role in bolstering the Turkish economy and are confident of a bright future ahead.”

The 950-MW plant, which represents about 1.1% of the country’s installed generation capacity and generates about 2% of Turkey’s annual electricity consumption, is “one of the [most] important power plants for [Turkey’s power] system security and availability,” Malik told POWER, noting the project’s importance as Turkey tries to meet its growing energy demand at a time when many of its long-time European trading partners are casting a wary eye toward the embattled nation.

The Kirikkale plant, located in a remote area in the Yahsihan District in Kirikkale Province (Figure 1) about 60 kilometers east of the capital city of Ankara, was built in about 34 months, from the start of construction in December 2014 until entering commercial operation, according to Malik. About 2,000 local workers were involved in the project at the height of construction. Samsung C&T had the engineering, procurement, and construction contract. ACWA’s Turkish subsidiary, ACWA Guc Elektrik Isletme ve Yonetim Sanayi ve Ticaret (ACWA Guc), was in charge of building the plant. NOMAC (First National Operation & Maintenance Co.), another ACWA subsidiary, operates and maintains the plant. 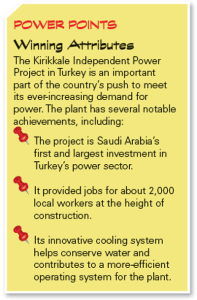 “The steam turbines are Alstom DKY3-2N49 condensing steam turbines [now GE Power-owned technology] with a rated output of 337 MW. The generators are Alstom 50WY23Z-124/72 generators of the totally enclosed water-to-air cooled design. The [Alstom HRSGs] are triple-pressure horizontal-flow units. The power [is] exported from the plant at 400 kV through three separate cables to the [gas-insulated switchgear] substation, which was constructed as part of the project and handed over to TEIAS, the grid operator in Turkey.”

At the time Alstom was awarded the contract to supply the plant’s power island, Steve Meszaros, senior vice president of Alstom’s gas business, said, “We are proud to bring our deep knowledge and expertise to this project. With its operating flexibility and high efficiency, the GT26 gas turbine will play a critical role in generating maximum project returns for our customer.” Alstom has operated in Turkey since the 1950s and supplies equipment for more than a quarter of the country’s installed power generation capacity.

“Cooling towers are categorized into counter-flow and cross-flow towers according to operating principles,” Malik said as he explained the system in use at Kirikkale. “In counter-flow cooling towers, the water flows top-down while the air moves from down-top. In cross-flow cooling towers, while the water falls top-down, air current is horizontal. In counter-flow induced-draft-type cooling towers, heated water, coming from the facility, is homogenously sprayed to all sections of the tower in top-down with the help of specially manufactured waterworks system and fountains. [The] sprayed water mass falls into pieces by floating in tower fills. Air, having the humidity of [the] exterior environment, is absorbed from down to top on fills with the help of motor fan group. Water, meeting the air on the inlay cooling surface, heats input to the air and a part of it cools by vaporing.

“Cool water is sent to [the] facility by gathering in [the] tower cold water basin. Air, whose humidity rises [close to saturation point] as a result of vaporing, is thrown to [the] atmosphere from the fan deck at the top of [the] tower,” Malik said. “Depending on the operation regime/operation hours, makeup water needs may change between 4–7 million tons/year.”

Malik said the cooling system at Kirikkale “includes 18 cooling fans, each of them working in the above principle [explained previously].” He said about 48,300 tons/hour of water is circulated through the system. Water for the plant comes from wells drawing supply from the nearby Kizilirmak River, which at 842 miles is the longest river entirely within the country’s borders.

The plant sources its natural gas feedstock via the Samsun-Ankara pipeline, operated by Botas, Turkey’s state-owned pipeline company. About a third of Turkey’s power generation in 2017 came from natural gas. Malik said Kirikkale “has been designed and provided to operate in ‘cycling mode,’ meaning daily start/stop to optimize cost/profit in [the] merchant market.”

The Kirikkale plant is meeting the power needs of its local community. Malik said it also takes its social responsibility to the area seriously.

“As far as corporate social responsibility initiatives are concerned, ACWA Guc collaborated with local community and local government authorities at different projects and training programs to improve the skills and talents of local people,” Malik said.

Among the company’s ongoing initiatives in Yahsihan are: organizing entertainment for children at a local government-run orphanage, as well as establishing a summer camp for orphans; establishing a reading and chess class at an area primary school; organizing a vocational training program to help local workers learn new skills; providing a room, furniture, equipment, and supplies for pregnant women at a local health center; and providing food and clothing for needy families.

“ACWA Power remains engaged with the local community to bring change to their lives,” Malik said.

Though helping local residents has been important for ACWA in Kirikkale, the company’s stake in the project could cause ACWA to delay its initial public offering (IPO) of stock due to the lira’s plunge. ACWA borrowed about $670 million from international lenders, including the European Bank for Reconstruction and Development, for the project, and the lira’s devaluation has eroded revenue from sales of electricity from the plant. Business analysts said ACWA hoped to raise at least $1 billion from an IPO, which may now be pushed to 2019. ■