Uncertainty about CO2 emissions legislation is prompting power plant owners to consider the possibility of accommodating "add-on" CO2 capture and sequestration solutions for coal-fired plants in the future. Those same plant owners may be overlooking the possibility that future natural gas – fired combined cycles will also be subject to CO2 capture requirements. This month we examine the capture options. In a future issue, Part II will present the installation and operating costs of different carbon capture technologies.

Just when you thought that carbon capture and sequestration (CCS) only applied to coal-fired plants, European regulators are talking about extending the technology requirement to natural gas – fired plants. In fact, many utilities and equipment suppliers are now working on front-end engineering designs for capturing the CO2 from gas plants.

At present, the timing and extent of regulations governing the process are unknown. Also, none of the current technologies has emerged as the dominant solution of choice, although many new and innovative alternatives are in various stages of research, development, or testing. For plants currently in the planning or design stage, owners; engineering, procurement, and construction contractors; and equipment suppliers are struggling to determine which features need to be included in new equipment designs today for future CCS systems.

In this context, the term "CO2 capture ready" requires careful consideration. Beyond the technical challenges, the commercial investment in those specific features aimed at future CCS must be justified. There is a significant risk in selecting a specific CCS technology today because the technology is likely to become quickly obsolete, further complicating future retrofits.

This article focuses on "add-on" features that do not require substantial modification of existing equipment, thereby making those technologies available today. Because CO2 capture is an energy-intensive process, this article examines the impact on plant performance of large steam extractions for CO2 capture processes. Large quantities of electrical power for CO2 compression will also be required. Part II of this article, slated for an upcoming issue of POWER, will evaluate the range of prices that should be expected if carbon capture is required from gas-fired combined-cycle plants.

The most straightforward path to reducing carbon emissions into the atmosphere is to increase the thermal efficiency of a plant, either through improved fuel combustion or by increasing the turbomachinery efficiency. In either case, less fuel is consumed to produce the equivalent output, so less carbon is released. Unfortunately, these types of performance upgrades could very well result in problems under the Clean Air Act’s New Source Review standards at many U.S. plants, so overt equipment upgrades are probably not feasible across the existing fleet of combined-cycle plants.

It may come as a surprise that the postcombustion capture process for natural gas – fired combined cycles is even more challenging than for coal-fired plants because it must accommodate low CO2 concentration in the exhaust gases (around 3%). Current development and pilot programs are focused on processing higher CO2 concentration levels (around 12%), which are typical for coal-fired plants.

A Familiar Set of Options

In principle, the range of postcombustion CCS options is essentially the same for a combined-cycle as for a coal-fired plant. The similar undesirable side effects of this approach to reducing carbon emissions also remain: significant plant thermal efficiency losses and increased operating costs. The challenge then becomes to find the most efficient means to supply the large quantities of steam to the selected carbon capture technology given the typical steam-side design of a combined-cycle plant.

The most common CO2 capture technologies can be grouped into three categories. A detailed description of each option was provided in my earlier articles, "Options for Reducing a Coal-Fired Plant’s Carbon Footprint," published in POWER in two parts, June and July 2008:

The postcombustion capture methods are the most likely to be used for existing combined-cycle plants and the design of future capture-ready power plants because they require minimal preinvestment for steam turbines and only a few later modifications to the major components of the combined cycle. The use of ammonia in place of traditional amines may eventually reduce the parasitic electrical and heat loads.

Although the technical and economic penalties for CO2 capture are high, postcombustion technology represents one of the most workable short-term solutions. Retrofits also strongly point to postcapture as a practical technical solution for some years to come.

The use of chemical solvents in postcombustion CO2 capture is a proven technology and will soon be proven with relatively large-scale pilot coal-fired applications, so that design approach will be used for the remainder of this discussion. To illustrate the impact of CCS on turbomachinery designs, Table 1 provides data on a 1 x 1 combined cycle for a 50-Hz application consisting of one F-class gas turbine and one steam turbine that will be used for the following case study. 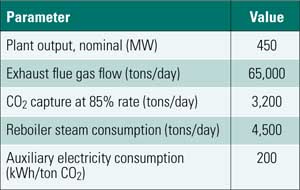 Two key factors must be considered when selecting a chemical solvent CO2 removal process for this sample plant:

Note that both options will require the steam turbine and HRSG be designed with the ability to operate at design conditions with large steam extraction flow.

The next challenge for the plant designer is to identify the most efficient conversion technology in terms of steam consumption for the solvent regeneration and minimizing electricity consumption for CO2 compression. (See "Capturing CO2: Gas Compression vs. Liquefaction," POWER, June 2009 for an analysis of the compression power required in a carbon capture system.)

There are many designer formulas for solvents, consisting of several primary, secondary, and tertiary amines, including monoethanolamine (MEA) and other reactive ingredients. Therefore, providing an absolute ratio of steam or electrical consumption per ton of CO2 captured might not be possible. Figure 1, developed from various system simulations conducted by Bechtel, illustrates that increasing the target CO2 removal percentage increases the steam and electricity required for capture and compression. The simulation assumed the basis for the evaluation is 95% CO2 removal from the flue gas and is based on a generic amine (MEA) with 30% concentration. Reducing the CO2 capture rate from 95% to 80% reduces steam consumption by about 20% and electricity consumption by about 4.8% (Figure 2). 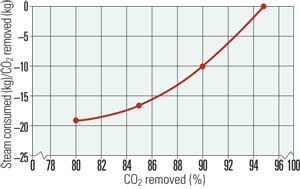 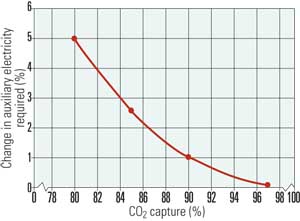 2. A comparison of electricity consumption at various CO2 capture rates. A 30% generic amine solvent concentration with 97% carbon capture is assumed. Reducing the CO2 capture rate from 97% to 90% reduces the auxiliary electric consumption by 1%. Source: Bechtel

In a gas turbine, the nature of the premix combustion system decreases the concentration of CO2 in the exhaust flue gas to half that of a coal-fired boiler. Recirculating part of the exhaust gases achieves a higher CO2 concentration while also reducing the oxygen content in the air entering the compressor. The impact of sustained gas turbine operation at or below 13% oxygen content in the combustor and downstream turbine is not yet sufficiently understood for many gas turbines favored for today’s combined-cycle plants.

Among the thermal NOx -reduction techniques developed in recent decades, internal flue gas recirculation (FGR) is being used very effectively to lower peak flame temperatures. However, the FGR rate can only be increased to a certain value for stable operation. Of particular interest is the fact that NOx emission levels and combustion system acoustics are substantially improved in this mode of operation.

However, the process may affect combustion stability and heat transfer properties. Theoretically, the amount of recirculated flow could be close to 40% of the exhaust gases. For CCS, FGR takes place at the compressor inlet. It should be noted that the amount of cooling necessary to bring the flue gases from exhaust conditions (at least 40C or 104F) to ambient temperature adds a substantial parasitic load. Due to the high sensitivity of gas turbine output to the compressor inlet temperature, a mixed stream of external air and recirculated gas above ambient temperature will certainly reduce the power generated.

Large gas turbine manufacturers are conducting extensive studies to examine not only the operational impact of FGR on various components but also the technical and economic optimization of the amount of recirculated flue gas.

The main impact on the steam turbine for either amine- or ammonia-based CCS technology derives from the large steam extractions needed for solvent regeneration. A range of solutions, stand-alone or in combination, are available to cope with various amounts of extracted steam. The options presented here can be implemented without a significant reduction in steam turbine efficiencies.

A considerable amount of steam is required for solvent regeneration. The steam consumption for a representative amine-based postcombustion capture system is shown in Table 1. Typical supply steam conditions are 3 bar (45 psi) and 270C (518F). The amount of steam for 90% CO2 recovery from the flue gas may be as high as 1.4 kg for 1 kg of CO2 , equivalent to more than 40% of the LP steam turbine flow. Therefore, in all plant operational scenarios, it is imperative to consider the possibility that the CO2 capture plant might not be able to receive part or all of the extraction steam from the LP section of the steam turbine.

It is also possible that the steam turbine intermediate pressure (IP) and LP turbines are located in a single casing, compounding the difficulty of extracting the necessary steam at the required pressures and temperatures. Also, venting such large quantities of steam is not an option in cases when the CO2 plant is out of service. Any design must accommodate rapid configuration changes that allow the IP and LP modules to operate under zero-extraction conditions.

There are three practical options for extracting the necessary steam for the carbon capture process from a typical combined-cycle steam turbine system:

Table 1 also provides an example of the impact of a CO2 capture plant, starting with the standard overall performance of a nominal 50-Hz, 450-MW net power plant and showing the CO2 capture system performance and the incremental increase in auxiliary power expected with postcombustion capture. The amount of auxiliary electricity required is a function of how much CO2 is removed. It should be emphasized that each project must conduct its own evaluation based on specific site conditions, selected capture technology, and type of sorbent used. Because each steam turbine vendor has a different cycle design with dissimilar IP module exhaust pressures, the output power of the noncondensing turbine varies accordingly.

In the given case, steam extraction for the postcombustion capture plant reduces steam turbine output by almost 23%. In addition to the reduction in plant gross output due to the steam extraction, net power output is significantly reduced by the increase in the auxiliary (parasitic) load.