AES subsidiary Indianapolis Power & Light (IPL) announced last month that it will be replacing 600 MW of old coal- and oil-fired capacity with a new 650-MW combined cycle power plant. The $631 million project is expected to begin construction next year and have a completion date in 2017.

The new plant is intended to replace capacity lost when IPL retires the remaining six units at the Eagle Valley Generating Station in Martinsville, Indiana. The 341-MW coal-fired plant, which first came online in 1949, will shut down in March 2016. IPL had concluded that replacing the plant made more economic sense than trying to bring it into compliance with Environmental Protection Agency (EPA) emissions regulations. The new facility will be built on the same site.

Though no equipment contracts have yet been signed, the plant is designed as a 2 x 2 x 1 configuration, with two F-class turbines feeding two heat recovery steam generators and a single steam turbine (Figure 1). Emissions control systems will include dry low-NOx burners, selective catalytic reduction, and a CO catalyst. 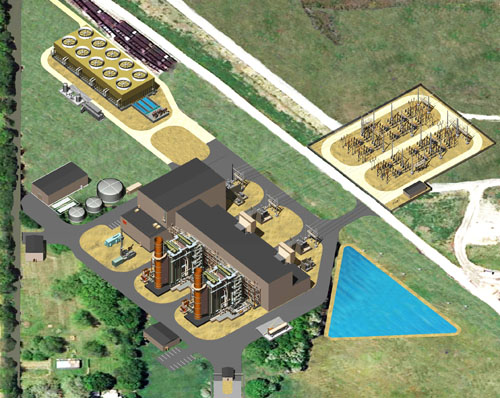 1. This rendering shows the planned combined cycle plant, which will replace a coal-fired plant on an adjacent site. Courtesy: IPL

IPL is also planning to retire two oil-fired units at its Harding Street Generating Station in Indianapolis. In addition, it is hoping to convert two other units at Harding, totaling 200 MW, from coal to gas. Harding’s newest coal-fired unit, built in 1973, will be getting upgraded emissions controls. The oldest operating unit at the Harding Street plant started up in 1941.

The projects are currently being considered by the Indiana Utility Regulatory Commission (IURC). The 600 MW of retired capacity represents about 18% of IPL’s total.

“We considered all of our options during a very extensive and competitive evaluation process,” said IPL CEO Ken Zagzebski. “Building a gas-powered plant is the most affordable and reliable solution for our customers and complements our generation portfolio that includes coal, gas, wind, solar and oil.”

The new plant will emit 98% less SOx, NOx, and particulate matter than the units it will replace, in addition to eliminating emissions of mercury, lead, and fluoride, and reducing water use by 97%.

“These replacement generation projects are a significant investment that is necessary in order to meet future electricity needs,” said Zagzebski.

According to IPL, the project will generate 660 construction jobs and 25 permanent positions; it also will contribute more than $1.6 million in annual tax revenue. However, IPL is also projecting that customers will see electricity rates increase 2% to 3% a year through 2018 because of the upgrades necessary to comply with changes in EPA regulations.

The Martinsville site was chosen over two other potential locations in part because of a 10-year, 60% tax abatement package the county offered to lure the plant. Unemployment in Morgan County was 9.1% in March, 1.5% above the national average, and 0.4% above the statewide rate. IPL estimates the project’s overall economic benefit at more than $850 million during construction and another $48 million annually during operation.

IPL is one of the oldest utilities in the Midwest, tracing its roots back to the 1880s. The company was formed from a merger of two of Indianapolis’s first electric companies in 1926. The utility, which was acquired by AES in 2000, currently serves 470,000 customers in the Indianapolis area.

IPL is in the midst of a transition from its once coal- and oil-heavy fleet. In 2007, 86% of its generation came from coal and oil. By 2017, gas, wind, and solar could account for nearly 44% of its portfolio, assuming the two proposals are approved by the IURC. IPL launched its first wind farm in 2009 with the 106-MW Hoosier Wind Project in Benton County, a joint venture with wind developer enXco. IPL and enXco later opened a second wind farm, the 205.5-MW Lakefield Wind Project, in Minnesota in 2011.

IPL’s largest plant, the coal-fired 1,760-MW Petersburg Generating Station in Pike County, will be getting a major investment in pollution controls later this year, also subject to IURC approval. The utility plans to invest $551 million to add flue gas desulfurization and fabric filter baghouses at Petersburg and the last coal-fired unit at Harding. Petersburg’s four units are newer than IPL’s other coal-fired assets, having come online in 1967, 1969, 1977, and 1986.