The expected renaissance for U.S. coal-fired generation has been more evolutionary than revolutionary: Less than half of the announced plants will likely progress to construction. However, the percentages for coal-fired plants aren’t significantly different from those for combined-cycle plants a decade ago, when dozens were ultimately canceled, leaving developers with warehouses full of unused gas turbines. The difference this time: The threat of carbon control legislation has moved many projects to the “wait and see” category.

Over the past few years, the U.S. power industry has experienced both a rebirth and dearth of new coal-fired generating capacity. It seems like yesterday that Industrial Info Resources was tracking 200 new units representing more than 85,000 MW that were proposed to be built across the country. Over time, continuously escalating construction costs, coupled with carbon legislation on the horizon, ended the coal-fired renaissance before it actually got started. Over the past few months, costs have stabilized, but the uncertainty about future environmental regulations lingers. Since the beginning of 2007, 84 projects and $68 billion of new coal-fired generation capacity have been confirmed as cancelled or placed on indefinite hold. 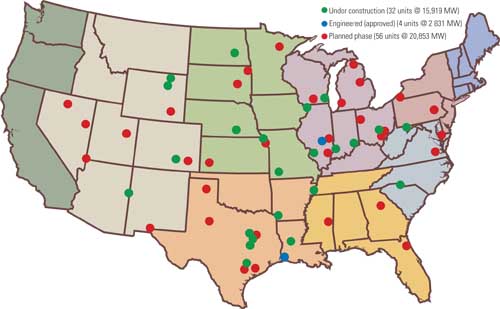 One of the more active regions is the southwestern U.S., where Oak Grove Management Co. LLC, a subsidiary of Luminant Energy, is under way on the 1,600-MW Oak Grove Generating Station near Franklin, Texas. In the Great Lakes region, Duke Energy Indiana Inc., a subsidiary of Duke Energy Inc., has started construction of the 630-MW Edwardsport integrated gasification combined-cycle plant in Indiana. In Virginia, Dominion Resources Inc. is under way with construction of the 585-MW Virginia City Hybrid Energy Center.

Projects currently under construction are all expected to be completed in 2010 through 2012. After this point, uncertainty abounds as to when there might be any significant amount of new coal-fired capacity moving forward.

It is safe to say that future developers of coal-fired projects will face a much different environmental landscape. In fact, the major stumbling block to developing new coal-fired generation is uncertainty about carbon legislation. Earlier this summer, we caught a glimpse of the direction a legislative approach might be headed with the U.S. House of Representatives’ passage of the American Clean Energy and Security Act (H.R. 2454). The bill is still facing what some consider an uphill climb to pass the U.S. Senate.

While it remains to be seen how stringent the final piece of legislation might be, in its current form, H.R. 2454 puts in place far-reaching mandates to reduce greenhouse gas emissions. The bill would put a cap on these emissions and would require the industrial sector to reduce output to specific targets between now and 2050. The bill covers 85% of the overall economy, including power producers; oil refineries; natural gas suppliers; and steel, iron, cement, and pulp and paper industries. In addition to emission cuts at existing facilities, the legislation would, if passed, mandate a national renewable electricity standard and energy efficiency standards.

Although building a new coal-fired power plant would not be impossible, the proposed legislation would raise the environmental hurdle, increasing the capital costs involved. New coal-fired plants could be built between 2009 and 2020; however, owners would be expected to implement carbon capture and sequestration technologies when they become widely available. Under the proposed legislation, by 2025, all coal-fired plants built after 2009 must capture 50% of CO2 emissions, while plants built after 2020 will be required to capture 65% of CO2 emissions. By some accounts, this could increase the capital cost of building a new coal-fired power plant by 30%.

Certainly, near-term projections appear bleak for would-be developers of coal-fired generation. However, it is difficult to imagine how we might meet future energy demands without one of our most reliable forms of fuel playing a significant role. According to the U.S. Department of Energy’s Energy Information Administration, we will need an additional 240,000 MW of net capacity by 2030 to keep pace with demand. Recognizing that more than 200,000 MW of our currently installed fossil-fueled fleet is 30 years old or more is also important (Figure 2). It’s clear that renewable energy will, without a doubt, play a much larger role in meeting future demand. Yet valid concerns exist about widespread transmission constraints and the ability of renewable energy sources to provide efficient, reliable, and affordable baseload capacity. Given such concerns, it is sensible for the nation and the power industry to strive to develop a diverse fuel portfolio. 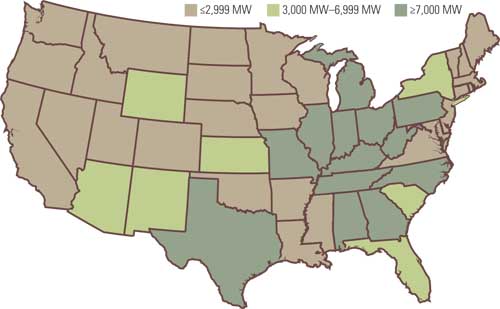 2.    Age is a state of mind. The U.S. coal-fired fleet of power plants continues to age gracefully. The quantity of coal-fired generation in each state that is older than 30 years is shown here. Included in this category are 257 coal-fired units built between 30 and 39 years ago, representing almost 120 GW, and 484 units over 40 year of age, representing almost 85 GW. For perspective, The Energy Information Administration notes that there are 1,470 operating coal-fired power plants with a nameplate capacity of 336 GW in the U.S. Source: Industrial Info Resources

In spite of the challenges, some forward-looking developers still have coal-fired projects on the books. At present, Industrial Info Resources is tracking 56 new generating units, representing nearly 21,000 MW, that are listed as active. Construction of these units is scheduled to begin between 2010 and 2014. Financing hurdles and tightening environmental regulations likely will lead to cancellation of some projects and delays for others. Assuming that all of these units move forward to the construction stage, they would represent 28 projects and capital investments totaling $50 billion.

The vast majority (14,235 MW) of proposed new coal-fired plants, and those under development, will use supercritical pulverized coal technology. These projects include Tenaska Inc.’s 765-MW Trailblazer Energy Center in Texas and Old Dominion Electric Cooperative’s Cypress Creek Power Station near Dendron, Virginia. The Old Dominion project is being proposed as a 750- to 1,500-MW plant that would cofire biomass as a supplemental fuel and utilize carbon capture and sequestration technology. Also under development is 2,600 MW from integrated gasification combined-cycle plants, including Southern Company subsidiary Mississippi Power’s 600-MW Kemper County project. This project is currently under review by the Mississippi Public Service Commission, and decisions regarding approval are expected during spring 2010. In addition to these projects, 800 MW of proposed capacity would use circulating fluidized bed technology, and developers have not chosen a technology for another 3,900 MW.