It’s hard to come up with a law affecting the electricity business that has more moving parts than the Clean Air Act. What’s worse, like a legislative Rube Goldberg device, those parts often seem to move in opposition, contradiction, and ignorance of each other. The regulatory edifice seems purposefully designed to create unintended consequences.

POWER magazine senior writer Sonal Patel recently captured the current clean air confusion with a wonderful graphic, The Regulation Road (Fig. 1), which resembles the venerable children’s board game “Chutes and Ladders”. At the moment, the electric industry finds the regulatory seas somewhat becalmed, as a new suite of Obama administration clean air rules are in suspension, either by administrative action or by the federal courts. In the meantime, what Republicans billed as a regulatory “war on coal” has turned out to be something else entirely, a successful market attack led by natural gas. 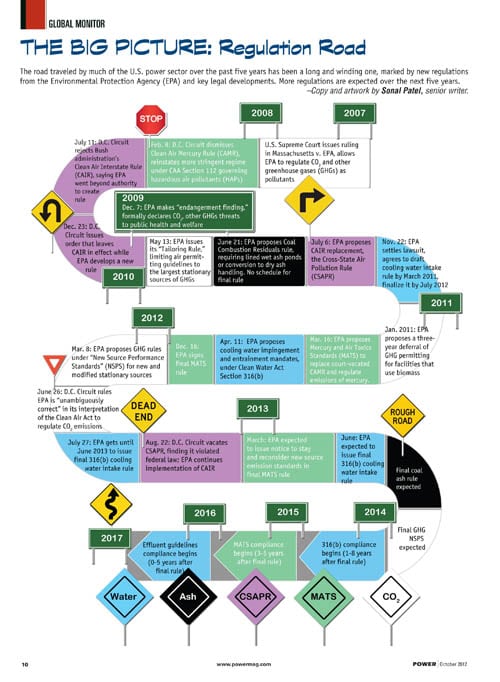 But the current calm could be only the relatively passive period at the eye of the Environmental Protection Agency (EPA)’s coming hurricane. The U.S. Government Accountability Office, the congressional watchdog agency, recently identified the four major regulatory assaults on coal-fired electric generation: the Cross-State Air Pollution Rule (CSAPR); the Mercury and Air Toxics Standards (MATS); the Cooling Water Intake Structures rule (no more once-through cooling); and the Disposal of Coal Combustion Residuals regulation (power plant ash disposal). The GAO did not even address proposed rules on carbon dioxide emissions, still hanging over the industry like a dark, smoky pall.

Taken together, says GAO, these four new rules pose significant challenges to the industry, although they do not constitute an existential threat to coal power. Overall, said GAO, the rules will result in some retirements, mostly of older coal-fired units, noting that retirements could also be “a result of other factors such as lower natural gas prices, regardless of the regulations.” Power companies, said GAO, may also upgrade the transmission grid to bolster reliability in the face of some base load retirements in some regions. Consumers may face somewhat higher electricity prices in some regions, although the low cost of gas could mitigate higher costs for coal generation. In low-key language, GAO said, “Available information suggests these actions would likely increase electricity prices in some regions. Furthermore, while these actions may not cause widespread reliability concerns, they may contribute to reliability challenges in some regions.”

A key outcome of the coming regulatory onslaught is certain to be increased uncertainty for power producers. A POWER webinar last summer—“Clearing the Air on Air Emission Regulations”—addressed the growing complexity and how companies are attempting to deal with the uncertainty. During that event, Frank Prager of Xcel Energy pointed out that utility plant investments are long-term commitments of money, made over decades, which implies planning spanning decades. But the pace of air regulation is hitting his company over a very short period of time. “That does affect our planning process,” he said. “We have to be very careful we aren’t making life-extension decisions unwisely.” He said the flurry of new air rules means that his company, which operates in multiple states where the rules have multiple impacts, “is very concerned about the potential for stranded investment.”

In Texas, where Xcel owns Southwestern Public Service Co., cross-state rules are particularly vexing. That a federal appeals court has suspended the EPA’s latest rule—CSAPR—and continued its predecessor, the Clean Air Interstate Rule, in effect, only serves to complicate utility decisions. Xcel in the Lone Star State has been forced to executive what Prager calls the “system flip,” which others might characterize as “uneconomic dispatch.”

“We normally dispatch coal first as the least cost” of generation, Prager said. “In order to preserve those emissions to comply with the trading program” in the cross-state programs, he noted, “we have to dispatch gas, including some old, inefficient” gas-fired steam boilers before coal. This not only entails large costs—Xcel estimates the cost of the “system flip” as “up to $200 million in the first year”—but reliability implications. “The system was never intended to operate that way,” he said.

Block Andrews of Burns & McDonnell Engineering Co. told the POWER webinar that the multiple pending air rules and the contention surrounding them operate in such messy, often interacting ways and so complicate decisions that the only way to deal with them is holistically. The industry, he said, needs “to look at holistic environmental air, water and coal combustion residual impacts and synergistic outcomes.”

The plethora of moving parts, Andrews said, means that “each new rule or court decision can drive a refresh of costs and strategic decisions.” For example, he said, “Can you sell your ash?” The answer varies from day-to-day, meaning there is no answer.

Andrews walked the webinar through some of the implications of the court-ordered CSAPR delay. The U.S. Court of Appeals for the District of Columbia Circuit in a 2-1 ruling in August put on hold the Obama administration’s cross-state rule, its response to the Bush administration’s CAIR, which the same federal appeals court had previously vacated in 2008. In overturning CSAPR, the court said CAIR becomes the default regulatory regime. In early October, the Obama administration asked the full D.C. federal appeals court to overturn the 2-1 ruling.

The request for an en banc review is a longshot, according to court mavens. The understaffed appeals court, which has vacancies in four of its 12 seats, held just one full-panel review during its most recent term. Should the approach to the appeals court fail, the administration could still appeal to the U.S. Supreme Court. In any case, resolution of the final rules for interstate pollution won’t happen until well into next year at the earliest.

Depending on how the courts and EPA deal with the CSAPR ruling, Phase II of CAIR, with its emissions trading regime, could go into effect in 2015, Andrews said. If that happens, he said, at the moment the CAIR emissions market looks like it won’t drive up generating costs. “Plenty of CAIR allowances are expected if Phase II goes into play,” particularly if current external conditions—low natural gas prices and depressed electricity demand growth—continue, Andrews said.

While CSPAR has become mostly a ghostly specter, it could return to haunt the industry in several ways, not just through an appeal to the Supreme Court or through a modified rulemaking, Andrews said, predicting some form of interstate transport rules. That, combined with the other pending rules, and the likelihood of a carbon rule sometime in the future, makes a holistic air quality compliance strategy even more important.

It’s crucial to understand that compliance costs are market driven, Andrews said. “If a lot of people have to do the same thing at one time,” he said, “it will drive costs up.” In addition to construction costs, balance-of-plant (BOP) costs, including the costs of permitting, can be sensitive to market forces. The calculations comparing new construction versus retrofits, Andrews said, can be tricky. Retrofit capital costs are much lower than new gas-fired replacement units. But lower capital costs can come at the expensive of higher dispatch costs. Andrews noted that many utilities with coal capacity will be retrofitting as the lowest-cost option, which he described as the “live to fight another day” strategy. When it all shakes out, said Andrews, he expects that companies will retrofit “flagship” units and retire geriatric generation.

In the view of environmental lawyer Jay Holloway, the next card the EPA deals in the game of clean air showdown will be the new mercury rule (MATS), which the Obama administration punted into the spring of 2013. “The MATS rule,” said Holloway, “will be the driver of retrofits, not CSPAR.”

And then, coming down the tracks and building steam, is a greenhouse gas rule. Holloway, who practices clean air law in Winston & Strawn’s Washington office, noted that “it’s been a fun summer to be an air lawyer.” As the calendar turns to a new year, being an air lawyer may be even more fun.