What does human metabolism have in common with coal combustion? Quite a bit, it turns out, say researchers at the National Energy Technology Laboratory (NETL) who are studying chemical looping combustion (CLC) involving coal gasification, an emerging technology for clean energy production from fossil and renewable fuels. Just as in the human body blood carries oxygen to cells that “burn” hydrocarbons to make energy for muscles, with carbon dioxide and water as by-products, metal oxides in CLC carry oxygen to coal and burn it. The products of CLC are also carbon dioxide and water. But its reaction generates enough heat to produce steam to drive a steam turbine.

In theory, the technology sounds promising. CLC is a flameless combustion technology requiring no direct contact between air and fuel. The process uses oxygen from a metal oxide oxygen-carrier for fuel combustion and produces carbon dioxide and water as by-products. Once the steam is condensed, a relatively pure stream of sequestration-ready carbon dioxide can be produced (Figure 3). The combustion process does not produce nitrogen oxides, nor does the carbon dioxide stream require any additional separation units. The technology also avoids the energy penalty that traditional fossil fuel-fired combustors must pay to produce pure carbon dioxide. 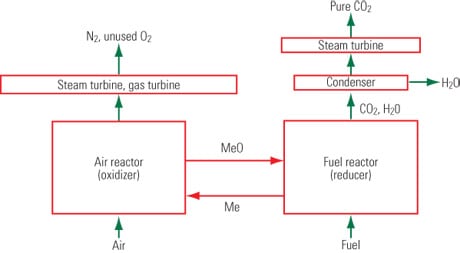 3. A CLC crash course. As shown in this simplified configuration of chemical looping combustion, fuel and metal oxide are mixed in a fuel reactor to create combustion. A highly pure stream of carbon dioxide is produced after water condensation. The reduced metal then is transferred to an air oxidizer for reoxidization. Source: NETL

But according to Ranjani Siriwardane, the lead researcher of a project at NETL’s Separations and Fuel Processing Division, though extensive work has been done on CLC using methane as a fuel, studies looking at oxygen carriers used to combust coal-derived synthesis gas are only about three years old and have not been well documented. The NETL researchers, who began their work last year, are specifically hoping to develop oxygen carriers that have stable performance during multiple cycles—which are critical for the success of the CLC process. So far, the “efficiency looks very good,” Siriwardane told POWER.

As she explained, in CLC, an oxygen carrier—typically a metal oxide—is prepared by first oxidizing a metal with air. The hot metal oxide is then reduced in contact with a fuel in a second reactor, thus combusting the fuel.

After a comprehensive literature search to identify those chemical looping processes that involve coal gasification, the team prepared various oxygen carriers, including nickel oxide on bentonite and copper oxide on bentonite, and evaluated them as oxygen carriers at 1,300F (700C), 1,475F (800C), and 1,654F (900C) using thermogravimetric analysis. These proved reactively stable over 10 cycles of oxidation with air and reduction with synthesis gas. Information computed for reactions over both oxygen carriers also proved that particle size, temperature, and pressure affected rates. The team then carried out an evaluation of the metal oxides using a high-pressure flow reactor at 150 psi with synthesis gas at the same three temperatures and found that they showed a stable reactivity over three high-pressure cycles. In this evaluation, a complete combustion of hydrogen and full-utilization of the metal oxide were observed.

Of all the metal oxides the team looked at—including copper oxide, iron oxide, nickel oxide, and magnesium oxide—copper oxide showed the lowest temperature, the highest percentage (100%), and the highest rate for the coal combustion (Figure 4). The team also concluded that though direct coal combustion is feasible with metal oxides, it would be necessary to develop an efficient solid circulation process and an ash/metal-oxide separation process. 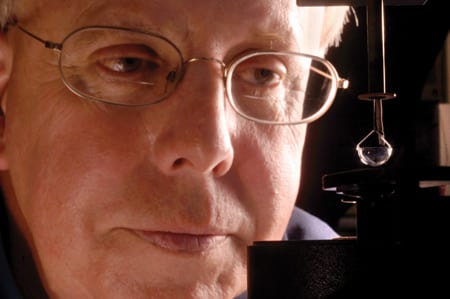 4. Putting the pedal to the metal. Researcher Tom Simonyi analyzes a coal-metal oxide sample in a thermogravimetric analysis unit at the National Energy Technology Laboratory (NETL). This analysis contributes to NETL research on the direct combustion of coal by chemical looping combustion. Source: NETL

Through the lab-scale studies, the researchers have also developed novel nano-composite oxygen carriers in collaboration with the University of Pittsburgh to improve the reaction rates. Siriwardane said that rate information will be used to design a CLC reactor. With adequate funding, the team plans to take their research to a larger scale, conducting “big fluidized-bed studies.” She added enthusiastically, “It won’t be easy, but we will get it to work.”