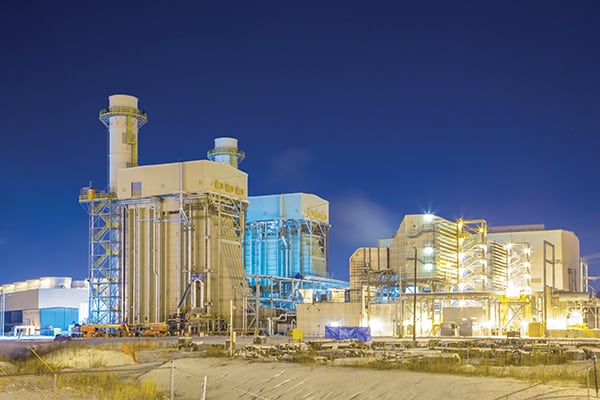 Kentucky has always been coal country, but times are changing, and its generation fleet is changing with them. Facing the prospect of costly emissions control upgrades at the 60-year-old Cane Run Generating Station, Louisville Gas and Electric and Kentucky Utilities opted to retire the aging facility and replace it with the state’s first combined cycle plant.

Kentucky is coal country. That was the case a century ago, and it’s still the case now. According to statistics from the U.S. Energy Information Administration, Kentucky has more operating coal mines than any other state, and in 2015, it produced 61 million tons of bituminous coal, ranking it third in the nation. Last year, it got 87% of its electricity from coal, second only to West Virginia. A mere 7% of its electricity comes from gas. Even that figure was a new record, more than doubling the previous high of 3%.

But times are changing, and Kentucky is changing with them. That big jump in gas-fired power was caused largely by one plant, the new Unit 7 at Cane Run Generating Station outside Louisville—the state’s first and so far only natural gas combined cycle power plant (CCPP). The story of how it came to be is a microcosm of the national story of how cheap natural gas and tightening environmental regulations are remaking the U.S. power mix.

The original Cane Run station was a state-of-the-art facility built to meet the booming electricity demand of the post-war nation. Louisville Gas and Electric (LG&E), founded in 1913 through a merger of several city utilities, began construction on Cane Run along the banks of the Ohio River outside Louisville in 1952, and the first unit came online in 1954. Additional units were added in 1956, 1958, 1962, 1966, and 1969, finally bringing total generating capacity to 943 MW. 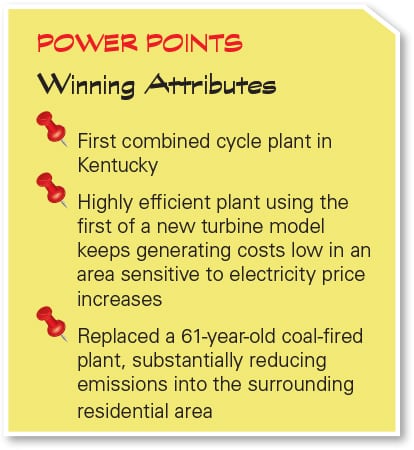 LG&E was a pioneer in developing flue gas desulfurization technology in the U.S., and it installed one of the nation’s first SO2 scrubbers in 1973. Then-President Jimmy Carter visited Cane Run in 1979 to see its system in operation as part of a campaign to promote cleaner coal generation.

A changing energy landscape led to the decision to retire the first three units in 1987, dropping total capacity to 563 MW. As the Louisville metropolitan area continued to grow in the 1990s and 2000s and suburbs encroached on the once-rural site, the station’s coal ash landfills began drawing heightened attention, especially after LG&E (which merged with Kentucky Utilities [KU] in 1998) sought permission to expand them in 2010. When the Environmental Protection Agency (EPA) began developing tighter regulations for mercury emissions that same year, LG&E and KU took the opportunity to continue their long-standing tradition of environmental compliance and transition their fleet toward a more diversified one.

In 2011, LG&E and KU announced a plan to retire about 800 MW of coal-fired generation and boost their gas, hydro, and solar capacity. Those retirements included the remaining three units at Cane Run. That generation needed to be replaced, and with falling natural gas prices and tightening environmental regulations, the clear choice for the most efficient and economical option was a new gas-fired CCPP.

In July 2012, LG&E and KU selected the joint venture of PCL Industrial Construction Co. and Black & Veatch, via its wholly owned subsidiary Overland Contracting, to perform engineering, procurement, and construction for the new Cane Run Unit 7, which was planned as a 640-MW, 2 x 1 combined cycle unit.

The heart of the plant would be a pair of Siemens SGT6-5000Fee gas turbines, the first two examples of this model produced. These are linked to Vogt Power International heat recovery steam generators supplying steam to a single Siemens SST6-5000 steam turbine (Figure 1). The turbines can achieve rated power without duct firing, boosting station efficiency.

A New Direction for Cane Run

Construction began in December 2012. Because the site was now surrounded by residential areas, extra precautions were necessary to keep construction noise and dust under control. Continual watering was used to keep the dust down, and on-site truck washes were used to avoid tracking mud into the neighborhoods. The plant was designed with ample noise suppression measures in order to keep ambient noise well below nuisance levels.

As always with any major construction project, safety was a key concern. PCL and Black & Veatch employed a number of measures to keep workers safe.

The safety program included a construction hazard assessment to identify major risks and develop safety protocols before workers entered the job site. The assessment led to a number of additional engineering safety protections, such as fall protection railings, being added to the design of the plant. Using the assessment, the team also developed a comprehensive job hazard analysis for specific tasks that served as the basis for the project’s fall protection plan. Pre-job safety sessions including all crew members on a specific job were used to give workers detailed instructions before the start of each task to help identify hazards and corrective actions.

The attention to safety paid off: Workers on the new Unit 7—peaking at around 600—logged more than 2.3 million man-hours without a single lost-time accident and a recordable injury rate of just 0.36. PCL awarded the crew its 2014 Bob Tarr Safety Award in recognition of the achievement.

First fire on the gas turbines came in February 2015, and the plant was declared commercially operational on June 19. Despite the challenges of the location and the severe 2014–2015 winter that blanketed the site in heavy snow, LG&E and KU completed the project $18 million under the original $563 million budget.

With the new plant nearly complete, LG&E and KU retired Unit 6 on April 15. Units 4 and 5 continued running through mid-June and were officially retired on July 1. After coal operations ceased, LG&E and KU transitioned to a retirement plan for the site’s bottom ash pond and fly ash landfill, which are classified by the EPA as “high hazard” impoundments. (This is an agency classification due to their proximity to residential areas and the Ohio River, not their physical integrity.) The pond will be drained, capped with clay, and covered with soil. The landfill will also be capped. These operations are expected to be completed by the end of 2016 and are planned to make the facility a better neighbor for area residents, some of whom have complained in the past about blowing coal dust.

Compared to the old units it replaced, Unit 7 generates about half the particulate emissions, 99% less SOx, and 82% less NOx, a fact noted by Louisville Mayor Greg Fisher at the plant’s inauguration. “This project is important on so many levels—for the construction jobs it created, the innovation it highlighted and the air that it will improve. Our city is grateful to LG&E for its vision to bring this project to reality,” he said.

Paul W. Thompson, COO of LG&E and KU, stressed that Unit 7 was only one element in the utility’s transition of its fleet. “Not only is this generating unit significant for our state, it’s also a significant part of our ongoing efforts to look down the road and, with approval from the Kentucky Public Service Commission, put resources in place that allow us to meet the future energy needs of our customers and evolve with our ever-changing industry.”

Coal will remain a major element of LG&E and KU’s portfolio for some time, because the abundance of local coal keeps fuel costs competitive with gas. That’s not likely to change soon, especially with the hundreds of millions of dollars the utility is investing in upgraded emissions controls at its remaining coal plants. Wind is a minor player in the area because state wind resources are poor—Kentucky ranks near the bottom of U.S. states for wind potential, according to the National Renewable Energy Laboratory. Solar is growing, but projects remain small. LG&E and KU recently opened a 10-MW solar farm at the E.W. Brown station.

But with prospects for new coal generation dim at best, even in states like Kentucky, gas offers the best option for clean, inexpensive electricity. That likely makes Cane Run Unit 7 a trailblazer, and its success lays out a roadmap for future projects in the area. ■