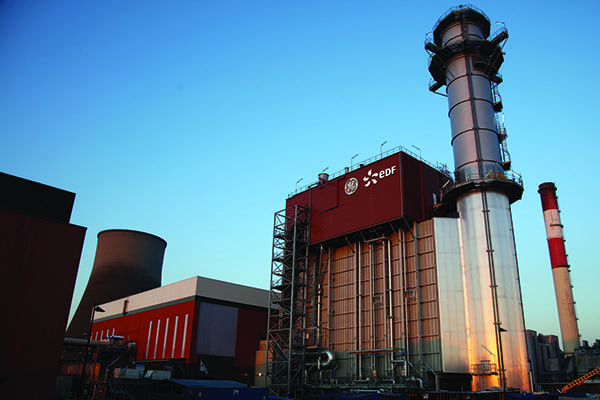 When you bring two power giants together to develop a new breed of combined cycle gas turbine plant, you expect the results to be pretty good. When EDF and GE installed the first commercial 9HA gas turbine in the Bouchain plant, the outcome was great: A new world record for combined cycle efficiency—62.22%.

If you know anything about France’s electricity grid, you probably know it relies heavily on nuclear power. In fact, since the late 1980s, uranium atoms have been used to generate more than 75% of the nation’s electricity—the highest nuclear power percentage of any country in the world. But times may be changing.

Nicolas Hulot, the French energy minister under recently elected President Emmanuel Macron, in a radio interview on July 10, said as many as 17 of France’s 58 reactors could be closed by 2025. The move is aimed at reducing the country’s reliance on nuclear power to 50%.

So, where is France’s power going to come from? The Macron administration pledged to close the country’s five coal-fired power plants by 2022, so it won’t be from that resource. The long-term goal is to double renewables to 32% by 2030, but variable wind and solar generation requires a reliable backup. Therefore, highly efficient natural gas-fueled plants could offer one dependable solution.

And when it comes to efficient natural gas-fired plants, there are none better than EDF Bouchain. The 605-MW unit has been recognized by Guinness World Records as the most-efficient combined cycle power plant in the world, with a third-party verified net efficiency of 62.22%.

The plant was developed under a unique industrial partnership between EDF and GE. The unit was constructed with the first commercial GE 9HA gas turbine, a machine that has some remarkable capabilities beyond just high efficiency. The plant can go from startup to combined cycle operation in less than 25 minutes. It can also be turned down to as low as 30% of its top generating capability while still meeting emission requirements. The flexibility is important for the industry’s ongoing efforts to increase the use of renewable energy and protect the environment.

The Bouchain location had been host to two 250-MW coal-fired units, which were retired in 2015. The new combined cycle unit has reduced site CO 2 emissions by 50%, reduced SO x emissions by 95%, and cut particulate emissions to zero. The new unit has a footprint one-quarter the size of the coal facility while generating more power.

“For those areas in the world where footprint is an issue, this thing is significant in terms of power density,” said then-GE Power President and CEO Steve Bolze during a media event on June 17, 2016. “It replaces a coal plant. It is on 25% of the footprint of the old plant. It generates more power with 50% less carbon emissions. This is a big deal,” Bolze added.

The Bouchain site allowed the old plant’s aero-cooling tower to be reused, which limits the amount of water pumped into the nearby Scheldt River. Another big benefit was the ability to transmit the new unit’s generation via the existing 400-kV underground line. 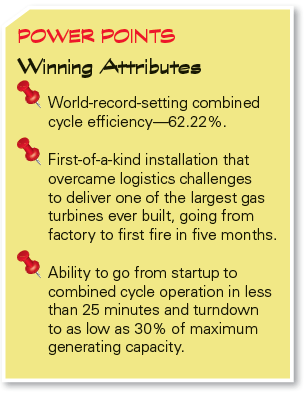 Construction began on the combined cycle plant with excavation work and soil preparation in 2012. Civil engineering work began in 2013. That year, deep foundations were constructed for the gas turbine, steam turbine, and generator. It took three months to install all of the rebar and pour the 2,500 cubic meters (m 3) of concrete needed for the power train pedestal foundation.

The process of moving the CT was no small job. The journey would span about 330 miles from Belfort, near France’s eastern border with Switzerland, to the Bouchain site. A steel “centipede” (Figure 1), that when loaded measured 109-m long, 6.65-m wide, and 5.7-m high, and weighed about 800 tons, was used for the first leg of the trip—Belfort to Strasbourg. The roughly 150-km drive ended up taking more than a week, with speeds rarely breaking 15 km/hr.

Once in Strasbourg, the CT was lifted and placed on a barge. The barge transported the heavy load on the second leg of the journey, beginning on the Rhine River and ending seven days later within about a mile of the construction site by way of the Scheldt River. A smaller transport platform carried the CT through the final on-land stretch. It arrived at its new home on July 15, 2015.

The fact that the gas turbine was not shipped until after completion of full-speed, full-load testing meant that it arrived on-site a bit later than would have been optimal. The delivery timetable forced the project team to follow a rather unusual installation and commissioning schedule, but that didn’t prevent them from meeting milestones on time.

One enhancement that made a big difference was the use of modularized auxiliaries from the factory. This new process first implemented during the Bouchain project saved on-site construction time. In the end, the gas turbine went from factory to first fire in only five months.

The unit was first synchronized to the power grid on January 21, 2016. Little more than a month later on March 1, 2016, the plant operated for the time in combined cycle mode. Trials were completed on July 26, 2016, and the unit entered commercial operation.

Utilizing the new 9HA turbine technology did create some HRSG design challenges. A new generation boiler was developed to accommodate the significantly higher temperatures, pressures, and outputs that result during operation. The new boiler design increased flexibility and ensured quicker startup than had been achievable previously. In addition to material improvements, a welding expertise center was created to ensure all work was able to meet strict quality standards.

Completing work safely was a top priority for the construction team and continues to be a focus for the power station. The Bouchain facility has implemented a “zero-accident” policy, which is consistent with other EDF sites. Some actions taken to raise safety awareness include:

■ All newcomers to the site are required to complete a welcome security session with the site’s environmental, health, and safety training staff.

■ Regular safety inspections are conducted throughout the facility with a goal of verifying compliance with requirements as well as implementation of prevention measures.

■ Emergency exercises including the involvement of external assistance, such as firefighters and rescue personnel, are organized on-site to test crisis procedures.

An ecological compensation zone has been created on-site to reduce the plant’s impact on protected species. The objective of the measure is to maintain suitable habitat for protected species, and ensure a tranquil and prosperous environment.

The construction project peaked in 2015 with up to 600 people working on-site at the time. The €400 million investment had a positive effect on the Bouchain region. As an operational facility, the plant now employs about 40 full-time EDF personnel and another 20 contractors performing various functions.

The 9HA gas turbine isn’t a one-hit-wonder either. Today there are more than 10 HA units connected to the grid, with plants now in France, Russia, Pakistan, and the U.S. More than 60 HA gas turbines are on order around the world, with new units planned in Argentina, Bahrain, Brazil, China, France, Indonesia, Japan, South Korea, Mexico, Pakistan, Taiwan, Thailand, and the U.S. Because all the HA gas turbines use the same technology, GE fully expects all units to meet similarly high efficiency levels to those proven at Bouchain.

But the company isn’t resting on its laurels. During the June 2016 media event, Joe Mastrangelo, president and CEO of Gas Power Systems, said the Bouchain plant’s 62.22% efficiency mark is just a starting point for what the company hopes to attain in the future. He suggested that GE’s technology programs could propel efficiency toward 65% by the early 2020s.

Mastrangelo’s team pointed out that the company has invested more than $1 billion developing the HA gas turbine. Based on the success of EDF Bouchain, it appears to have been money well spent. ■

Opening image is courtesy of GE.