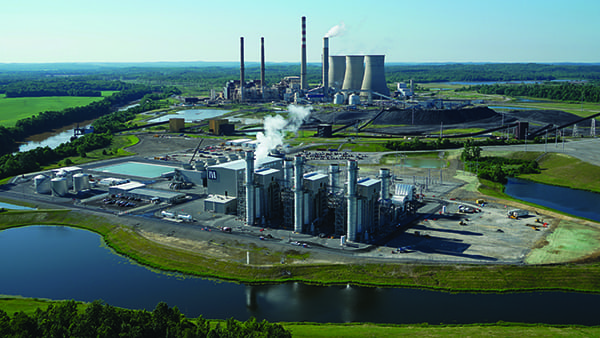 A partnership between one of the nation’s largest utilities and one of the world’s largest construction contractors resulted in the 1,100-MW Paradise Combined Cycle Plant in Drakesboro, Kentucky, next door to what has long been the state’s largest power plant.

The project began as an idea spurred by government regulation: replace two units of an aging coal-fired power plant on a winding Kentucky river with a state-of-the-art combined cycle facility. The Tennessee Valley Authority (TVA) had done it previously, in neighboring Tennessee, and was looking for similar success the second time around.

There would be challenges. Government regulations had been updated; the deadline to meet some emissions targets, the impetus behind the project, meant even the generation set-up would be reconsidered. Construction would have a tight timeline to meet those government mandates. Teamwork would be essential; delays would put the entire project at risk. And this is Kentucky, where more than 80% of the state’s electricity comes from coal.

TVA went to work, partnering with Kiewit, to build the $1 billion Paradise Combined Cycle Plant, near Drakesboro and the former mining town of Paradise along the Green River. In a state better known for bluegrass, bourbon, and thoroughbreds, the two have completed what now is considered the most-efficient gas plant in TVA’s vast fleet, one being honored as a POWER Top Plant for 2017.

“The project was a huge success,” Roger Waldrep, TVA’s general manager for major projects, told POWER. “It demonstrates what can be accomplished by partnerships, teamwork, and the relentless pursuit of risk management and mitigation. The project was much more than a 3 x 1 combined cycle plant. This was a gas plant that would be built in the heart of coal country and would be responsible for carrying the legacy of TVA forward in the region.”

The 1,100-MW Paradise plant, completed in April 2017, is part of TVA’s commitment to expand the utility’s fuel diversity. It is designed to partly replace the coal-fired Paradise Fossil Plant, which came online in 1963 and has been the state’s largest power generation facility, distinctive with its three large, natural-draft stacks, a feature many people associate with nuclear power plants. Units 1 and 2 of the Fossil Plant, each with a generation capacity of 704 MW, were retired earlier this year. The 1,150-MW Unit 3, which began operating in 1970, will remain online.

The contract for the new plant was awarded in May 2014, the air permit was received in February 2015, and construction began March 2, 2015. Combustion gas turbine (CTG) delivery occurred in June 2015; heat recovery steam generator (HRSG) delivery followed in August 2015; and the generator step-up transformer arrived in March 2016 (Figure 1). The turbines were first fired in October 2016, about six months before the plant began commercial operation on April 7 of this year.

Kiewit and TVA had worked together previously on the John Sevier Combined Cycle Plant in Rogersville, Tenn., which has been operating since late April 2012. That plant replaced the coal-fired John Sevier Fossil Plant. Kiewit completed the construction scope of work on that project, but for Paradise, Kiewit was a partner from the start.

“This project was the first partnership for TVA and Kiewit Power with Kiewit Power in a full EPC [engineering, procurement, and construction] role,” said Waldrep. “A lot of time was spent at the beginning with TVA learning how Kiewit performed their work, and Kiewit learning the expectations and requirements of TVA. This proved invaluable as the project progressed and risks and rework were avoided,” key reasons, said Waldrep, why the project was completed 12 weeks ahead of schedule and about 20% under budget.

There was about 18 months of upfront engineering and procurement work for the project in Lenexa, Kan., home base for Kiewit’s power group. “The success of the Paradise project is entirely attributable to our project team,” said Kiewit’s Mike Wilkie, a project manager. “Kiewit and its partners developed a fully integrated, cohesive ‘Paradise One-Team’, defined by a spirit of collaboration in which all team members worked together toward a common goal.”

The goal was not reached without challenges. “TVA began wrestling with a solution for the Paradise Fossil Plant in 2012,” said Waldrep, with the utility mulling options for its coal-fired units due to emissions regulations. “[We were] considering additional environmental controls for Units 1 and 2 at the coal plant, or replacing the generation with a gas-fired facility of either a four-unit simple cycle configuration or a 3 x 1 combined cycle configuration. TVA initially selected additional environmental controls as the solution in 2012, but then reconsidered in 2013 as the certainty of compliance became less and the cost of ownership [of the coal plant] continued to rise.”

The plant was ultimately completed ahead of schedule, but the original end date was placed in jeopardy at the beginning because of a six-week delay in issuance of the construction air permit. The delay caused TVA and Kiewit to compress the construction schedule in order to meet deadlines set by the Mercury Air Toxics Standards (MATS) rule, which said the two coal units at Paradise could not legally operate after mid-April 2017. Because the new plant was replacing some of the generation of the coal-fired plant, delays could impact TVA’s ability to operate the transmission system if there was a period without generation in the region. 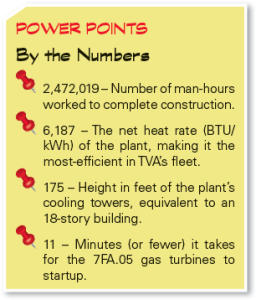 “This MATS date set an unofficial target for the project,” said Waldrep. “Not only did the project improve on the contractual completion dates, it was able to meet the MATS date for the coal units, helping TVA maintain the reliability of the transmission system in the area.”

The Paradise plant is called the most-efficient gas plant in TVA’s fleet, and not just for its electricity generation. Paradise Plant Manager Drew Reid said, “The most-efficient claim is based on the lowest heat rate [net 6,187 BTU/kWh] in the TVA gas fleet, as well as the innovative work management efforts we have put in place.” Those include sitewide Wi-Fi, a communication system for the plant through iPads, and electric vehicles to move around the complex, with charging stations throughout. TVA also is using all LED lighting to save energy and improve visibility and safety.

“The components are installed in a typical wet-cooled, 3 x 1 combined cycle configuration,” said Langstraat. “The Paradise pipe rack uses tube steel columns in a moment-frame design. Because of the tube shape, the loading capacity of the steel is the same in both directions. This unique feature allowed the pipe rack to be designed with zero cross braces, a first for both Kiewit and TVA. To maximize plant efficiency, the boiler feedwater pumps furnished by KSB include variable-speed hydraulic couplings designed and manufactured by Voith. The couplings allow the pump to ‘slip,’ minimizing the brake horsepower consumed by the pump at off-design cases.”

The water intake system also required innovation. Langstraat said TVA wanted to avoid a lengthy permitting process and some of the challenges involved with working around the river, so it opposed a traditional onshore intake structure. The partners worked out a technical solution, locating a water intake structure inside the plant’s boundary fence. The system includes an underground intake pipe routed to the river, with a suction screen on the pipe beneath the surface of the water.

“The intake structure was constructed of a concrete caisson approximately 20 feet in diameter that was sunk to a depth of nearly 70 feet,” said Langstraat. “The team then used a micro-tunnel boring machine to drill the intake pipe into the river where the suction screen was placed. Locating the raw water pumps and related equipment within the plant boundary yielded two distinct advantages: easy access for plant operators and minimal river work during construction.”

Wilkie said Paradise, now the state’s second combined cycle plant in addition to the Cane Run Generating Station in Louisville (a 2016 POWER Top Plant), could be a model for TVA projects moving forward. “In the end, the project was completed ahead of schedule and under budget in a way that formed the basis of a lasting partnership” between Kiewit and TVA, he said. ■