The Florida Public Service Commission (PSC) gave the green light for the $1.3 billion project to proceed on Jan. 5, agreeing with FPL that the new capacity was needed. FPL says the new plant should begin construction in 2017 and operations some time in 2019 (Figure 1). 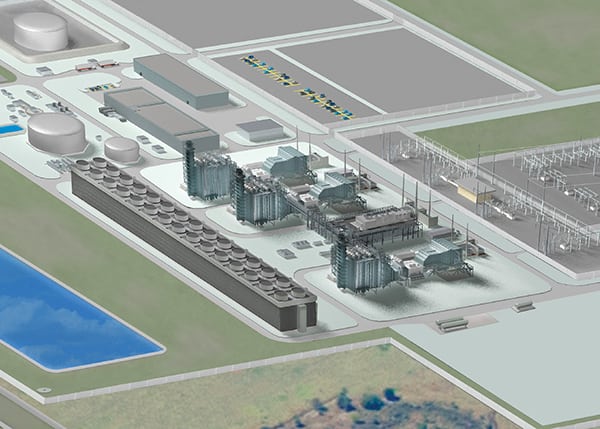 “The FPL Okeechobee Clean Energy Center represents another major milestone in our successful program of phasing out older power-generating units and investing in new, high-efficiency clean energy centers that reduce emissions and save our customers money on fuel costs,” FPL President and CEO Eric Silagy said in a statement.

According to FPL’s application with the PSC, the 3-on-1 plant will employ three of GE’s new air-cooled 7HA turbines, which the company began rolling out last year. The three 7HA.02 turbines, which are rated at 337 MW each according to GE, will feed a single 550-MW steam turbine. The HA turbines are designed for high efficiency and fast ramping.

The new plants have helped FPL substantially reduce its fuel costs and carbon emissions. FPL said its customers have saved $8 billion since 2001 as a result of the modernization of its fleet.

“Not only is the FPL Okeechobee Clean Energy Center the most cost-effective option for meeting Florida’s future energy needs, it will also help us keep our customers’ bills low for the long term and further reduce emissions from our system, which is already among the cleanest and most affordable in the nation,” Silagy said.

FPL is planning at least one more large CCPP project for the early 2020s, though no site has yet been chosen for that plant.

PSC staff noted that the plant will increase FPL’s—and Florida’s—already heavy reliance on natural gas. The state now gets 67% of its power from gas according to the Energy Information Administration, placing it among the biggest users of gas-fired power in the country. Experts have warned that number could spike as high as 85% if more of Florida’s coal plants shut down as a result of the Clean Power Plan.

FPL, meanwhile, relies on natural gas for nearly 70% of its generation. That’s up significantly over the past decade as the utility phases out old oil-fired plants like the ones the new Cape Canaveral, Riviera Beach, and Port Everglades facilities replaced. FPL is also in the process of purchasing and shutting down the coal-fired Cedar Bay power plant because its electricity—which it was committed to buy until 2024—has become too expensive, as gas prices have fallen.

Still, with new coal effectively off the table for environmental reasons and nuclear far more expensive, the PSC agreed the Okeechobee Clean Energy Center was the most cost-effective baseload option. (FPL also expects to add about 200 MW of solar in 2016, while its planned two-unit expansion of the Turkey Point nuclear plant is still awaiting an operating license from the Nuclear Regulatory Commission.)

Low gas prices have given Florida some of the cheapest electricity rates in the U.S., but the state produces none of its own gas and must import all of it through two interstate pipelines. FPL has looked at various ways of securing its gas supplies, including adding new interstate pipelines—a third is under construction by Spectra Energy with operations set for 2017—and direct investment in gas production.

That latter venture, begun in 2014, hasn’t quite panned out the way FPL had hoped. According to a report in the Tampa Bay Times, the $191 million investment has so far seen a nearly $6 million loss, though FPL still maintains the project will be a long-term success.