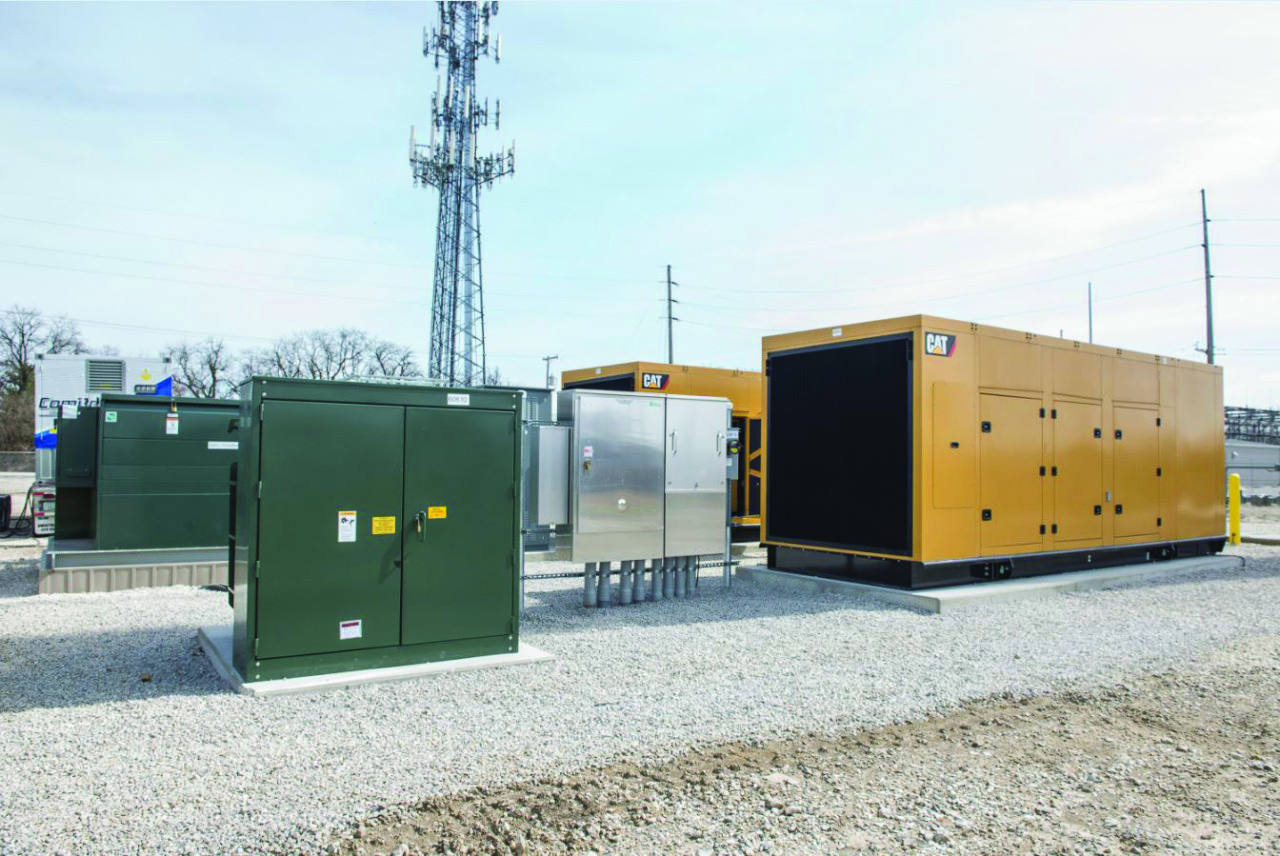 The microgrid installation at the Ameren Illinois Technology Applications Center (TAC) near the University of Illinois campus in Champaign—designed, engineered, and constructed by S&C Electric Co. of Chicago—represents a state-of-the-art integration of wind, solar, natural gas, and battery storage into a project that is POWER’s Smart Grid Award winner.

“Seamless.” That’s the word that both Ameren Illinois and S&C Electric use, unbidden, to describe the microgrid demonstration project they developed in Champaign, Ill., near the University of Illinois campus.

The microgrid that S&C, a 105-year-old company that has long specialized in grid and power engineering, built for Ameren is the soul of the utility’s Technology Applications Center (TAC). The utility built the TAC and its microgrid on property it owns near the university, says Ameren in a press release, to test and demonstrate “monitoring and control methods for aggregating clean, renewable energy sources—wind, solar and natural gas—with advanced automation and battery storage.”

Ameren says the microgrid, which went into service earlier this year, “is one of the few in the world that operate at utility-scale voltages, between 4 kilovolts and 34.5 kilovolts, with multiple levels of control. It is the only known microgrid in the nation capable of seamlessly transitioning the power source for an entire distribution circuit from exclusively distributed generation sources to the traditional grid.”

Mike Edmonds, S&C president of U.S. business for the employee-owned, Chicago-based company, which designed, engineered, and installed the Ameren TAC microgrid, told POWER that the microgrid is “on the [macro] grid and off the grid seamlessly.” Other microgrid implementations, he said, must stop to adjust when they shift from grid connection to island operation. On the TAC microgrid, users “don’t know the difference,” a very neat trick. Switching from the big grid to the microgrid requires changes in grounding, inertia, frequency stability, and power quality.

Ron Pate, Ameren Illinois’ senior vice president for operations and technical services, told POWER, “You’re running on the utility grid, and all of a sudden that’s interrupted. You’ve now got to look at load, economics, make sure generation is available, then balance the load and power quality. You have all those balls juggling in the air at the same time.”

Edmonds noted the challenges. When you go off the grid, he said, “you’ve got all that inertia” as coal stations go offline and other resources are no longer available. The utility has to provide the inertia from the loss of the big generation and “keep the frequency stable.” It involves tricky balancing of grid harmonics to control the grid, along with important preservation of power quality.

Ameren’s Pate said, “Our challenge was how can we serve our customers seamlessly, so the customer is not aware” of grid outages and transitions between the conventional grid and the microgrid.

The TAC microgrid, says S&C in a background paper, “tackles this problem by demonstrating the potential for widespread [distributed energy resources (DERs)] integration within an existing distribution network. The addition of DERs combined with a sophisticated automation distribution system and microgrid control system can provide traditional utility providers with improved reliability, resiliency, emissions, savings, and security.”

The TAC microgrid can produce up to 1,415 kW of power, enough for about 190 homes. Most of the customers on the microgrid are residential apartments, according to S&C, but also include the TAC itself, an electric vehicle charging station, an elementary school, and a warehouse. The leased generation consists of 100 kW from a Northern Power Systems wind turbine, 125 kW from a Yingli solar photovoltaic array, a 1-MW Caterpillar natural gas generator, and 250 kW of battery storage provided by S&C. The loads connected to the microgrid, according to S&C, “average around 600 kW to 650 kW with a peak demand of about 1 MW.”

IPERC has described its advanced controllers as monitoring “the status of the microgrid components in real time. Optimization algorithms make intelligent decisions and issue control signals to meet critical loads and minimize fuel consumption, even turning off unneeded generation until it is required.”

According to Edmonds, most other microgrid providers use repurposed controllers, “not really full, true microgrid controllers that are highly secure” against cyberthreats. “That gave us a hard foundation,” he said.

“Devices can be added or removed,” according to S&C. The control system “uses a distributed control architecture with several GridMaster controllers located throughout the microgrid. The control system oversees microgrid operations and maintains safe operating parameters.”

Ameren has used the microgrid to test a variety of operational cases, including:

■ Islanded operation and transition to and from grid connection.

S&C said in a background paper, “Microgrids provide a more cost-effective and highly efficient way to incorporate sustainable energy resources…Use of renewable energy resources such as solar photovoltaics and wind turbines are optimized by intelligent software and controls that forecast their expected contribution to the microgrid while also allowing for real-time variations such as passing cloud cover or changing wind speeds. This capability means that renewables are used when and how it makes financial sense.”

S&C’s Edmonds says “Storage is the essential component” in the TAC microgrid, where solar is connected to the AC grid and storage is also connected to the grid, with four quadrant inverters handling the power flows. The microgrid, he says, “is built from the ground up for energy storage.”

Ameren’s Pate said the TAC was the result of Illinois legislation enacted in 2012 to encourage distributed energy resources. “We own some property next to the university,” he said. “We owned a building and some circuitry.” It was a natural for the demonstration project. The company put together the specifics of what it wanted to achieve with a microgrid and called for bids. Ameren chose S&C, both because “of our long relationship” with the company and because S&C had earlier implemented a sophisticated microgrid demonstration for Oncor, a Texas distribution utility.

Take note, energy project developers. Work began on the TAC project in April 2016, and the microgrid was ready for testing in September of that year.

“While the project was conducted on a tight timeline,” said S&C, “there were a surprisingly small number of challenges. The major challenge encountered during this project was the commissioning process. Commissioning was scheduled to take approximately four weeks, but ended up taking closer to 12 weeks. The coordination of the various vendors, equipment installation and testing was no small feat. The sequencing of equipment installation and testing was critical as specific pieces of equipment must be installed in a particular order. Additionally, once installed, equipment did not always perform as it was designed and thus the control strategies and contingency programming had to be adjusted to reflect the actual state of the equipment. While this created interruptions for the commissioning process, it also ensured that the overall microgrid was able to adapt to the final configuration.” The project was up and running in December.

According to Ameren, the price tag for the TAC microgrid was $5 million, and the total budget was just slightly more than that, as Ameren owned the building. The company leases the solar and wind generation. Under Illinois law, Ameren is unable to own generation, so the microgrid is solely a test bed. “We are not trying to put something back on the grid,” said Pate.

Ameren Illinois is a regulated gas and electric delivery utility, based in Collinsville, Ill., not far from its parent company, Ameren Corp., located in St. Louis, Mo. Customers of Ameren Illinois have retail choice of their electrical supplier, while non-residential gas customers can also choose their energy provider. The service territory covers 43,700 square miles (about three-quarters of the state) and supplies 1.2 million electric customers and 816,000 natural gas customers in central and southern Illinois.

The Ameren Illinois distribution system consists of about 4,500 miles of electric lines, and 46,000 miles of gas transmission and distribution mains, with 12 underground gas storage fields, with a total capacity of about 25 billion cubic feet.

S&C says the Ameren microgrid “goes above and beyond providing resiliency and sets a new standard for the electric power industry. The future of the electric utility industry is evident because this microgrid contains multiple distributed generation sources along with utility, commercial and residential customers.”

While storage is a key to microgrid technologies, battery storage is “still price prohibitive for general deployment,” said Edmonds. All the battery technologies available today have limitations, including Li-ion (lithium-ion) batteries, which currently have the highest power density. In addition to a short life span, Li-ion batteries have a tendency to catch fire. “I personally won’t put a battery behind the meter in my home,” he said.

But in microgrids, battery storage is manageable. Are microgrids a growth business? Edmonds said, “I think so,” particularly on the unregulated side of the business. “It is still small dollars,” he said, but S&C has “four active proposals in play right now.”

Regulators may get in the way of widespread use of microgrids (see Microgrids: An Old Concept Could Be New Again). Edmonds noted that Texas passed a law specifically aimed at Oncor, essentially declaring storage illegal. The company is forbidden to export power. Ameren is not permitted to own generation to the grid. A year ago, Maryland regulators denied cost recovery to Exelon’s Baltimore Gas and Electric for a microgrid project in Baltimore. Also last year, Pennsylvania regulators for Exelon’s PECO utility in Philadelphia forced the company to withdraw a plan for cost recovery of a microgrid.

Now the attention has returned to Pennsylvania, where the General Assembly is considering legislation that permits cost recovery for microgrids and energy storage. Microgrid Knowledge commented, “The crux of the rate issue is who benefits from utility microgrids and therefore who should pay for them.”

David Chiesa, senior director of business development at S&C, told the online newsletter “I can guarantee that other utilities across the country are looking at this. This has the potential to be a huge step change in the market. It’s good for the utility, it’s great for the consumer, it’s good for the microgrid market.” ■