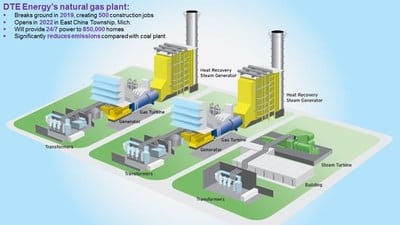 DTE Energy has filed plans with the Michigan Public Service Commission (MPSC) to build a 1,100-MW natural gas-fired power plant on about 100 acres east of the existing Belle River Power Plant, northeast of Detroit near the Canadian border. The August 1 filing confirms the proposal that DTE discussed with local officials last fall for a new plant at the site. DTE said it expects the plant will begin operating in 2022.

The proposed $1 billion plant, located in East China Township in St. Clair County, is part of the utility’s plan to replace coal-fired electricity production in the region as it seeks to reduce carbon emissions by 30% by the early 2020s, and by more than 80% by 2050. DTE has said it will retire three coal-fired plants, located in Trenton, River Rouge, and St. Clair in the Detroit area, between 2020 and 2023. The certificate of necessity filed with the MPSC calls for construction of the new plant to begin in 2019, pending state approval; the state has 270 days to respond to the filing.

“A fundamental transformation in the way we produce power in Michigan has already begun,” Trevor F. Lauer, DTE Electric president and COO, said in a statement. “Last year, we announced three DTE coal-fired power plants will be retired by 2023 and replaced with cleaner, more efficient, reliable and affordable energy, including natural gas and renewables. This filing with the MPSC includes nearly a year of research and a competitive bidding process that determined building a natural gas-fired plant is the best solution for our customers due to many factors, including the environment, reliability and affordability. Natural gas-fired plants will be a critical part of our power generation capacity in the decades ahead.”

The 1,547-MW St. Clair Plant has not returned to full operation after a fire in August 2016 caused extensive damage to the facility; only six of its seven coal-fired units are in service. The plant has about 280 employees. Local officials have been concerned about the loss of jobs, and tax base, in the area due to the closure of the coal-fired plants. Irene Dimitry, DTE’s vice president of business planning and development, said the new gas-fired plant is expected to have about 35 employees; the existing Belle River plant, a 1,664-MW facility with both coal-fired and gas-fired units, employs about 180.

“DTE has been an important partner to St. Clair County for more than 60 years, both as a job creator, a responsible corporate citizen and a strong community partner,” Dan Casey, St. Clair Economic Development Council CEO, said in a statement. “We are excited about the move to cleaner energy and are thrilled that DTE has made the commitment to continue to be an integral part of our community for generations to come.”

Dimitry said Detroit-based DTE plans to continue operating its 1,170-MW Fermi 2 nuclear plant in Monroe, Mich., “until at least 2040,” because it is operating well and has zero emissions. However, she said DTE has no plans to add other nuclear facilities. Fermi 2 late last year received approval from the Nuclear Regulatory Commission to operate at least until March 2045. DTE in late July reported strong second-quarter earnings, and also said it plans to build up to 6,000 MW of renewable energy capacity by 2050 to replace its shuttered coal-fired generation. CEO Gerry Anderson in July, speaking at a Department of Energy conference on nuclear power, said, “We have very old assets [that] we need to move on [from] and replace.”