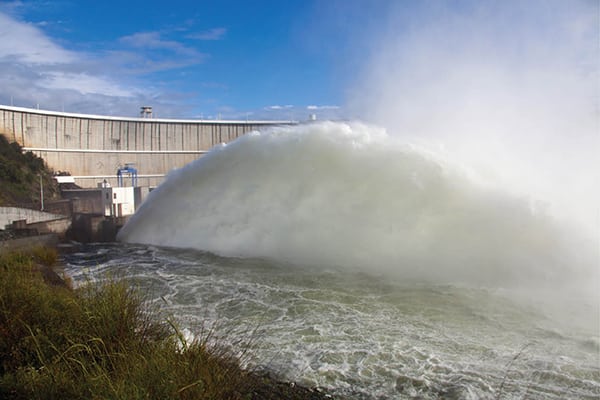 European Union carbon emission limitations and a lack of indigenous fossil fuel resources pushed Portugal in 2000 to embrace renewable energy. Today, Portugal supplies over 50% of its annual electricity demand from renewable resources, an increase of over 25% in the past five years alone. Leading Portugal’s renewable energy transformation is Alqueva II, a new pumped storage hydropower plant that supplies baseload electricity and backstops the large amount of variable wind generation in the south.

Sunny Portugal enjoys a climate much like that of Southern California and likewise has considerable wind resources. Unlike California, Portugal has virtually no indigenous fossil fuel resources (some coal, but no gas or oil), which has pressed the country to rapidly develop its wealth of renewable resources.

Portugal’s success in converting an economy largely based on imported fossil fuels for electricity production to one based on renewable energy resources has been remarkable. In 2006, for example, fossil-fueled plants produced two-thirds of the country’s electricity consumption (~38% using imported oil and natural gas). Today, more than half its energy comes from wind, solar, and hydropower, having constructed the world’s largest solar farm, Europe’s largest wind farm and an extensive network of hydroelectric facilities.

Portugal’s push for renewables began in 2000 when the government purchased all the utility-owned transmission lines and formed a publically owned and traded company to operate the system. The purpose of this very controversial move was to encourage capital investment in upgrades and investment in smart grid technologies, a precursor to integrating renewables onto the grid. The plan also included a national system of electric car charging stations. Since the acquisition, over $600 million has been invested in grid upgrades.

Unfortunately, the country’s economic malaise, punctuated by an International Monetary Fund and European Union bailout in May 2011 that required drastic public spending cuts, has undercut the rate of renewable expansion in Portugal. The reduction in energy consumption (averaging –6% per year for the past three years but down only 0.4% in the first quarter of 2013) during the economic downturn, combined with favorable weather conditions for hydroelectric power, resulted in Portugal’s renewable energy plants supplying 70% of total consumption in the first quarter of 2013, according the Portuguese grid operator. For a few hours in late 2011, the country’s entire electricity demand was provided by renewable electricity.

Construction of the Alqueva Dam, located on the Guadiana River in southern Portugal, was completed in 2002, and the reservoir reached capacity in 2012. The Alqueva Dam constitutes one of the largest dams and artificial lakes (250 km²) in Western Europe. In addition to hydropower, the entire infrastructure provides agricultural irrigation water and the regional water supply, including a strategic water reserve during periods of extended drought. The entire hydropower plant is expected to produce up to 10 billion kWh per year, enough power to supply the surrounding towns of Evora, Beja, Portel, Moura, and Vidigueira.

The 518-MW hydroelectric power station was constructed in two phases. Phase I (259 MW) was commissioned in 2004. In 2008, to meet the need for network regulation because of the booming growth of wind power in southern Portugal, Energia de Portugal (EDP) decided to double the hydropower capability of the Alqueva infrastructure. The Portuguese Minister of Environment, Agriculture and Sea, Assunção Cristas, commissioned 259-MW Alqueva Phase II pumped-storage hydropower plant in January 2013 (Figure 1).

Pumped storage plants use reversible pump/turbines and motor/generators that can be used in two modes: either to generate electricity by transferring water from an upper reservoir to a lower one, or by storing energy by pumping water back into the upper reservoir, where it is stored and reused during peak electricity production hours. Pumped storage can recover about 80% of energy consumed in the overall energy cycle. Pumped storage plants also have very fast response to system load changes, which is necessary when balancing system loads dominated by unpredictable wind energy, as is the case in southern Portugal.

In 2008, EDP signed a contract with Alstom and its consortium partners EFACEC Engenharia S.A. and SMM for the construction of Phase II at a contract price of approximately €95 million (roughly $130 million). Alstom delivered and installed two new 130-MW reversible pump/turbine-motor/generator units and other hydro-mechanical equipment for Phase II. In addition, Alstom delivered ring gates, governing systems, excitation systems, and a static frequency converter and was responsible for the transportation, supervision of erection, and commissioning of the new units. Royal Haskoning performed construction management for the project. The entire plant is forecasted to run for approximately 2,100 hours in turbine mode and approximately 1,900 hours in pumping mode every year.

Phase II doubled the output of the Phase I project, but the new addition was not identical to the first. Operating experience from Phase I plus advances in low-head design and performance for increased turbine efficiency, nearly maintenance-free bearing technology, and improved ring gate technology that reduces onsite construction were integrated into the design of the new addition.

Hydraulic Design Improved. The Alqueva II hydraulic design improvements were facilitated by advances in computer modeling and computational fluid dynamics technology, as well as the latest pump turbine design processes. The new design of the turbine produced an average 0.6% increase in plant efficiency. Furthermore, for Alqueva II, the new hydraulic design adjusted the turbine performance curve to maximize output in the expected range of operation, especially at full load.

New Thrust Bearings. Reliability of the bearing technology used in a hydropower plant is crucial to the machine’s overall reliability. The Alqueva pumped storage plant has been equipped with Alstom’s latest thrust bearing technology, which allows equal load distribution on each pad, regardless of frame deformation, shaft line deflection, or misalignment in all operating conditions. Alstom’s hydrodynamic thrust bearings use a self-regulating mechanism to carry the bearing pads. This approach resulted in a shorter installation time plus increased safety during operation and enhanced performance monitoring.

Improved Ring Gates. Pump/turbines are usually protected by spherical or butterfly valves whose dimensions are often too large for low-head pump turbines such as at Alqueva. Ring gates are critical safety equipment for hydropower plants because they can shut off the flow of water to the turbine. Alstom’s ring gates reduce the construction work required for installation while retaining the safety and operational advantages of inlet valves. The ring gates used for Alqueva II have a diameter of 8.27 m and are 15 cm thick, which makes them among the largest ring gates ever deployed in Western Europe. ■