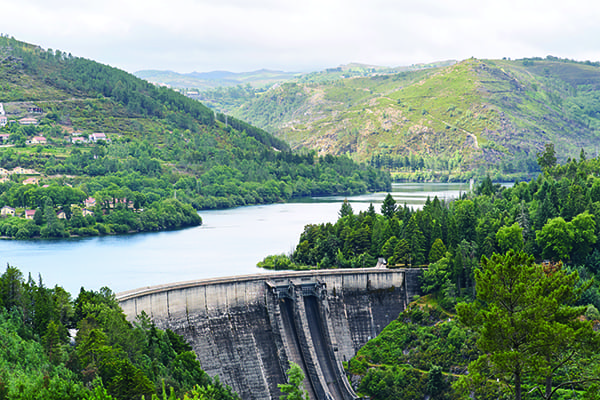 The Frades II pumped-storage hydro project in Portugal took advantage of existing dams to incorporate a scheme that includes the largest variable-speed reversible units installed in Europe. The facility provides a versatile option for managing wind and solar power fluctuations.

The Portuguese electric system has seen a rapid increase in renewable energy deployment over the last 10 years. In fact, the International Energy Agency (IEA) commended Portugal for its renewable energy achievements in a report issued in 2016. However, the IEA said the growth of renewable generation has brought with it risks.

Indeed, there have been months during which renewable sources were able to power the entire nation. In March 2018, for example, energy from renewable sources made up 103.6% of Portugal’s mainland electricity consumption, according to data from REN—the country’s transmission system operator (TSO). But there have also been months in which renewable energy has come up well short of that objective; renewable production supplied only 38% of the domestic consumption in July 2018. The variance is obviously alarming.

Pumped Storage Can Act as a Buffer

However, pumped-storage power plants can offer grid operators flexibility. Pumped-storage systems can consume energy by pumping water upstream during periods when other renewable sources, such as wind and solar power, are producing more power than the grid needs. Conversely, when wind and solar supplies tail off, pumped-storage units can reverse operation to generate electricity from the stored water to make up the difference.

EDP Group is the main electric energy provider in Portugal. Its generation unit—EDP Produção—has been deeply committed to hydropower since 1950. It has a vast portfolio of more than 50 hydro plants and 10.1 GW of installed capacity. Its recently commissioned Frades II pumped-storage project was part of an ambitious hydro development program the company undertook to take advantage of the encouraging environment for renewable expansion.

The Frades II pumped-storage project, located 40 kilometers (km) northeast of Braga in northwestern Portugal, is the second repowering of the Venda Nova scheme. The Venda Nova and Salamonde dams were built in the 1950s and 1960s within the mountainous Cávado River basin, the country’s highest rainfall region. In 1996, the original scheme was repowered to increase the use of the area’s water resources. The Frades I plant, which is also a pumped-storage facility, included a new hydraulic circuit and a new powerhouse equipped with two Francis pump-turbines with an output of 97 MW each. It began operation in 2005.

A Project with Many Pieces

Frades II was conceived shortly thereafter; construction began in 2010. Built in a granite rock mass on the left bank of the Rabagão river, Frades II is an important addition to the eight plant Cávado-Rabagão Homem cascade system. It takes advantage of a 420-meter water head between the existing Venda Nova (upstream) and Salamonde (downstream) reservoirs over a relatively short, 5-km length. The new underground plant includes an unlined hydraulic-circuit tunnel designed to flow 200 m 3 /sec.

The project required nearly 9 km of tunnels to be excavated along with two surge shafts and a large cavern. The hydraulic circuit includes a water intake at the Venda Nova reservoir, equipped with fixed trash racks, and emergency and stop-log gates in a tower accessible by a short bridge. The outlet structure, which serves as a water intake in pumping mode, is in the Salamonde reservoir. It is equipped with removable trash racks and stop-log gates.

An upper surge tank, located about 390 m upstream from the powerhouse consists of a 78-m-high, 13-m-diameter, concrete-lined surge shaft with an expansion reservoir at the surface. Two unlined vertical shafts—360 m deep and 5.4 m in diameter—connect the surge tank to the headrace tunnel. The lower surge tank is connected to the tailrace tunnel about 95 m downstream of the reversible units. It consists of a 95-m-high, 13-m-diameter, concrete-lined vertical shaft and a horizontal tunnel acting as the expansion chamber.

The Frades II powerhouse was constructed in a large cavern (Figure 1) located at an intermediate point in the hydraulic circuit. It is about 150 m long and equipped with two single-stage Francis-type pump-turbines. The variable speed is provided by double-fed induction machines, which is currently the state-of-the-art technology for larger generators. In turbine mode, each unit can reach full-load—390 MW—in about 80 seconds. In pump operation, the load varies gradually between 300 MW and 390 MW under the control of a dedicated voltage-source inverter (VSI), which produces the three-phase excitation for each generator. The connection to the electric transmission grid is established via main transformers (465 MVA each), 400-kV cables, and a gas-insulated switchgear (GIS) with separate 400-kV overhead lines.

Frades II is the largest pumped-storage power plant in Portugal. It is equipped with the largest variable-speed reversible units in Europe—two 420-MVA-rated asynchronous motor-generators—and stands out as one of the largest hydropower plants applying this technology in the world.

The Frades II project was initially designed to include reversible, synchronous machines, much like the Frades I facility, only larger. The civil works contract was awarded to a joint venture of Portuguese contractors, and groundwork was started while the equipment supply bidding process was still ongoing. In the end, EDP chose to equip the plant with asynchronous, variable-speed machines. The change, however, forced a redesign of the equipment layout. For example, the VSI used is larger, heavier, and delivers 25 times more power than a corresponding static-frequency converter of a fixed-speed facility with similar output. While the decision has proven to be a good one, the switch did result in minor construction delays.

The contract for design, manufacturing, erection, and commissioning of all equipment was awarded to Voith Hydro and a Siemens consortium. Voith was responsible for the delivery of hydromechanical equipment; the variable-speed, reversible units; the command and control system; and the three-phase excitation system. Siemens supplied general low-, medium-, and high-voltage electrical installations, including the 21-kV main bus, inverter circuit breakers, 400-kV GIS, safety systems, and mechanical equipment and systems, such as cranes, ventilation, drainage, and dewatering. Additional sub-suppliers included Efacec for the main transformers, GE Energy for the VSI, ABB for the generator circuit breaker and related equipment, and Brugg for the 400-kV cables.

EDP told POWER the scale of the project and the fact that it was constructed near an existing, operating power plant were the biggest challenges. Specifically, the Frades II scheme, which, as previously mentioned, has an unlined hydraulic circuit 12 m in diameter and nearly 5 km long, runs mostly parallel and close to the Frades I pressure tunnels. The distance varies from 400 m near the powerhouses to only 29 m at the nearest point of the circuits.

The proximity created particular challenges regarding the flood risk assessment and excavation procedures, not only for the works themselves, but also for the existing powerhouse, because the definitive access tunnel is the same for both schemes. Furthermore, the connection between the two powerhouses had to be established at an early stage of the work.

There were also concerns around construction of the sand trap. Its dimensions—22 m at its maximum diameter and 138 m in length—and the complexity of the work related to the assembly of 1,150 tons of steel liner elements, required additional safety precautions and special manufacturing and handling procedures.

A further challenge was related to the grid connection. The Portuguese TSO required EDP to prove compliance with the grid code before it would accept connection of the high-power asynchronous units to the network. The process involved several simulation studies to verify behavior of the units during incidents on the 400-kV system.

As can be expected on any project of Frades II’s magnitude, several other unpredictable situations also arose. There were unforeseen geological ground conditions, changes in fire safety regulations, transport difficulties, non-expected failures, and other setbacks during erection and commissioning, due in some cases to the equipment’s innovative features. Nonetheless, EDP and its contractors persevered through the difficulties and succeeded in bringing the project to commercial operation. 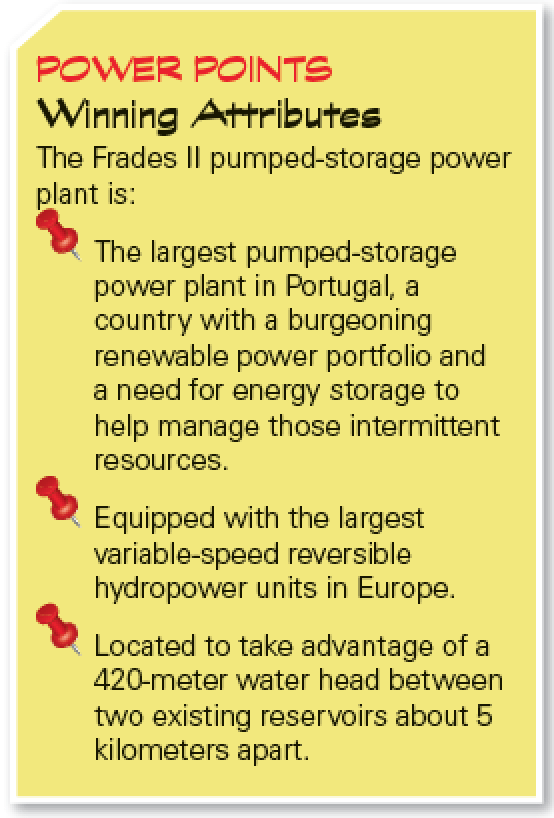 Promoting Safety and the Local Economy

EDP went out of its way to establish programs and initiatives that mitigated construction impacts on the community and supported the local economy. It funded projects to promote energy efficiency and local development. It favored the recruitment of local employees and promoted sub-contracting with nearby companies. It also encouraged entrepreneurship programs in collaboration with regional business schools. As a direct result of these efforts, 40% of the total manpower employed during construction were local residents and 20% of the companies involved were well-established in the region. There were on average about 400 workers employed by the project with about 900 employees working on-site at its peak.

Safety was another important aspect of the project. EDP, Voith Hydro, and Siemens worked together to promote a zero-accident culture. The boards of the three companies signed an agreement to always put safety first. Although the zero-accident goal was not achieved, the project’s safety index compared favorably with international benchmarks.

Frades I and Frades II share the same upstream and downstream reservoirs, have parallel hydraulic circuits, and each has two reversible units. Although the power plants are completely independent, in the end, EDP has two complementary power plants that can be managed as one with a turbine-mode power range from 50 MW to nearly 1,000 MW. These characteristics make the Frades pair a perfect arrangement to catch market opportunities and provide grid stability. ■