The pace at which next-generation nuclear power is developing in the U.S. accelerated this February as the U.S. arm of Toshiba inked an engineering, procurement, and construction (EPC) agreement with an advanced boiling water reactor (ABWR) nuclear development company jointly owned by NRG Energy and Japan’s Toshiba Corp. The agreement seeks to ensure that the two ABWRs planned to expand the South Texas Project (STP) in Bay City, Texas, will be constructed on time, on budget, and to exacting standards.

One of the newer plants, and the largest nuclear power plant in the U.S., the 2,700-MW STP currently consists of two pressurized water reactors (PWRs). The reactors were brought online in August 1988 (Unit 1) and June 1989 (Unit 2). NRG, which owns 44% of the facility, and the South Texas Project Nuclear Operating Co. in September 2007 filed the first full application for a combined construction and operating license (COL) with the Nuclear Regulatory Commission (NRC) for two 1,350-MW GE-Hitachi ABWRs. The companies now anticipate that the COL, which has been since revised, will be issued by 2012. San Antonio – based CPS Energy owns 40%, and Austin Energy owns the remaining 16% of the STP facility.

The ABWR (Figure 1) was jointly developed by three firms: GE, Toshiba, and Hitachi. But Toshiba fell out of that partnership when it acquired Westinghouse Electric, maker of the AP1000 PWR, in October 2006. Now both GE-Hitachi (which formed a nuclear alliance in 2007) and Toshiba stake their claim to develop the ABWR. The design is already in use in Japan at Tokyo Electric Power Co.’s Kashiwazaki Kariwa nuclear power plant and at Chubu Electric Power Co.’s Hamaoka site, and two more reactors are under construction at Lungmen on Taiwan. In the U.S., STP alone had opted for the design, but when GE-Hitachi pushed its next-generation economic simplified boiling water reactor (ESBWR) — a design years away from design certification — the alliance abruptly contracted Toshiba to supply the ABWR. 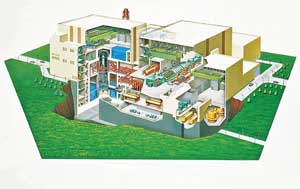 Figure 1. A contest of wills. GE, Hitachi, and Toshiba partnered to develop the advanced boiling water reactor, but Toshiba fell out of the alliance in 2006 when it acquired Westinghouse Electric, maker of the AP1000. Now the GE-Hitachi partnership and Toshiba both have claims on the reactor design. The South Texas Project, which plans to build two ABWRs in an expansion of its Bay City site, last year turned away from GE-Hitachi and contracted Toshiba instead. This February, Toshiba inked an EPC deal to ensure that the STP’s planned ABWRs will be built on time and on budget. Courtesy: Toshiba Corp.

NINA, which holds 50% of the planned expansion along with CPS Energy, also announced that it was looking to diversify ownership of its share, and that it was seeking additional equity investors. After the sell-down, it said it expected that NINA and CPS Energy would each hold 40% and a new owner could hold 20% of the equity interest. The decision to initiate the sell-down process was prompted by a favorable preliminary ranking for the expansion in the U.S. Department of Energy’s Loan Guarantee program, for which NINA had already submitted its Part II application. The company also said it was looking for loan guarantee options through the Japanese government.