Post-consumer waste could be the newest, ubiquitous fuel source for distributed energy generation if a mobile waste-to-energy conversion system launched this January finds its way onto the parking lots of facilities that produce more than two tons of waste daily. According to its developer, Massachusetts-based IST Energy, the GEM system can process up to 3 tons of waste daily — which can include paper, plastic, food, wood, and agricultural materials — and produce up to 120 kWe and 240 kWth.

The 8-foot-high self-contained system fits inside a storage container, taking up the space of three to four parking spaces. When an operator feeds the system waste, it densifies, conditions, and converts the waste into optimized fuel pellets (Figure 6). These pellets are then converted into synthetic gas via downdraft gasification, and the synthetic gas powers a turbine-generator. 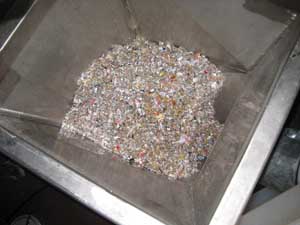 Figure 6. Waste not, want not. A waste-to-energy conversion system recently launched by IST Energy processes up to 3 tons of postconsumer waste daily with a nominal output of 120 kWe and 240 kWth. When an operator feeds the system waste, it densifies, conditions, and converts that waste into optimized fuel pellets, as shown here. These pellets are then converted via downdraft gasification into a synthetic gas, which powers a turbine-generator. Courtesy: IST Energy.

The company said that it developed the GEM system prototype after winning funding from the U.S. Army, which was looking for help to reduce the volume of trash in the battlefield. One of the key requirements was that the system was portable and relatively clean. IST Energy opted to use downdraft gasification, which is a process that uses high heat to decompose trash in a controlled process. "Our downdraft gasification process is initiated by a resistance heating method. Key to note is that upon start-up of the gasifier, the system is self-sustaining — it does not require continued input of heat," Mike Cushman, IST Energy’s executive vice president, told POWER." This is due to the exothermic nature of the reactions occurring within the gasifier."

Cushman said that the process generates a significant amount of heat, but that system efficiency is dependant upon the composition of the waste stream. The gasification process also reduces waste volumes by 95%, producing enough energy to power and heat a 200,000-square-foot-building housing 500 people, he said. The company admits the process is not carbon emissions-free, but it said that emissions are offset by the GEM’s reduction in waste hauling, landfill use, and fossil fuel use.

The system, which costs about $850,000, has a 15-year life. Cushman said that since it had been subjected to substantial testing during the design and build phases, the company was certain that it would function optimally with little maintenance. It would, however, train customers on how to use it and would attend to service calls.