About 110 years after the Belgica expedition — a polar voyage organized by the Geographical Royal Society to establish the world’s first Antarctic scientific research program — a new, unique research station sponsored by the Belgian Federal Government has been commissioned. Inaugurated on Feb. 15 after two years of construction, the Princess Elizabeth Station (Figure 4) is the only polar base to run entirely on renewable energies. 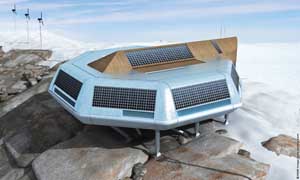 Figure 4. A sustainable station. The Princess Elizabeth Station, a recently inaugurated research station in Antarctica—a region with Earth’s most severe climate—runs entirely on renewable energies. The three-story steel-encased building uses power produced by eight wind turbines (each rated at 6 kW), solar thermal,and photovoltaic panels for heating and lighting and for running scientific instruments.The station was built by the International Polar Foundation with funding from the Belgian government. Courtesy: Detrois.com

Unlike other stations that rely on diesel generators, the Princess Elizabeth Station is powered by eight wind turbines, provided by Scottish-based small wind turbine manufacturer Proven Energy. The 6-kW turbines on Utsteinen mountain ridge are reportedly sustaining Earth’s most severe weather conditions, including temperatures of –60C (–76F), average winds of 53 mph, and winter gusts of over 200 mph — conditions previously thought too brutal for wind turbines. The electricity generated for the station’s heating, computers, lights, and scientific instruments is the highest output yielded by a small wind power system in the world, estimates the International Polar Foundation, the organization that built the steel-encased station.

In addition to the turbines, the spaceship-like three-story station will use both solar thermal and photovoltaic panels that have been integrated into the building. Solar thermal panels also melt snow to provide the station’s water supply, thereby limiting the use of electrical energy to pump water. The station also uses microorganisms and decomposition so that shower and toilet water can be used up to five times before being discarded.