Geothermal energy projects are gaining steam in many parts of the western U.S., in large part because geothermal power has the advantage of being a renewable energy source that provides baseload power with no emissions and no waste by-products. One example of the latest developments in geothermal power generation is the recently completed 10-MW geothermal plant in rural Utah, which uses innovative modular power generation units.

The U.S. continues to be one of the lead countries in the booming geothermal power market, according to the Geothermal Energy Association (GEA). Today the U.S. is the world leader in on-line geothermal energy capacity, producing 30% of the worldwide total.

Electricity is currently generated from geothermal energy in seven U.S. states: Alaska, California, Hawaii, Nevada, New Mexico, Utah, and Idaho. Other states, such as Oregon and Wyoming, are soon to be added to the list. As of August 2008, the GEA estimated that the U.S. had a total installed capacity of 2,957.94 MW of electricity generated by geothermal power.

More capacity is being added to that total with the introduction of the Thermo Plant in Beaver County, Utah, which is designed to produce 14 MW of gross electrical power (approximately 10 to 11 MW net) once it becomes operational toward the end of this year. It is the first commercial geothermal power plant built in Utah after a hiatus of more than two decades (Figure 1). 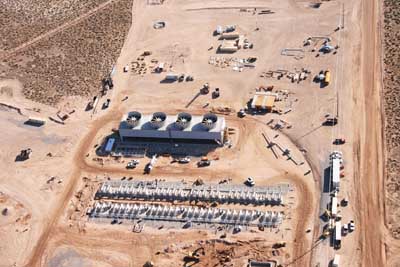 1. Some like it hot. This aerial view shows the completed geothermal plant. The power generation units were manufactured off-site and then transported to the Thermo Plant site, where they were connected to the wells and cooling towers. Courtesy: Raser Technologies

To develop electricity from geothermal resources, wells are drilled into the naturally hot fluids that are known as geothermal reservoirs, which are created by heat emanating from Earth’s interior (Figure 2). These reservoirs are composed of underground areas of cracked and porous hot rocks saturated with hot water, which sometimes can reach temperatures of 500F or higher. 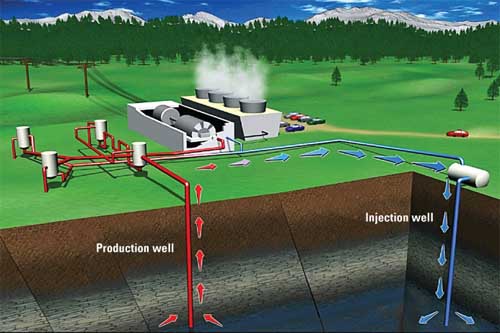 2. Subterranean sizzle. In a geothermal power plant, hot water from underground reservoirs shoots up a production well, provides heat or steam to power a turbine/generator, and then is returned to the reservoir through an injection well. Source: Geothermal Education Office

On Oct. 22, the U.S. Department of the Interior (DOI) announced that it plans to make more than 190 million acres of federal land in 12 western states available for geothermal energy development. The DOI’s Final Geothermal Programmatic Environmental Impact Statement identifies 118 million acres of public lands managed by the Bureau of Land Management and 79 million acres of National Forest System lands that could be opened to future geothermal leasing. The DOI speculates that this new development potentially could lead to 5,540 MW of additional geothermal power capacity by 2015.

Because some renewable energy sources can only operate under favorable weather conditions, they are often considered to be limited in their ability to meet the looming large-scale power needs of this century, according to the GEA. Geothermal plants, however, have the potential to provide reliable sources of electricity while offering significantly lower emissions levels than fossil fuel sources and avoiding problems of radioactive waste disposal. Unlike wind and solar energy, geothermal energy is a readily available, constant source of heat or steam for power generation and is therefore considered a baseload resource, as are coal, oil, natural gas, and nuclear.

In October, POWER interviewed Brent M. Cook, CEO of Raser Technologies, about both general trends in the U.S. geothermal industry and the company’s new geothermal plant in Utah.

"Wind and solar power are considered intermittent power — meaning that they produce power only when the wind is blowing or the sun is shining," he said. "Both only are available about 30% to 35% of the time. You have to build roughly three times the capacity in wind and solar as geothermal to produce the same amount of megawatt-hours. While wind is cheaper to build on a megawatt basis, it is much more costly on a megawatt-hour basis than geothermal. Coal and natural gas also are cheaper as far as the cost of construction goes compared to geothermal; however, if you take into account the cost of fuel and the cost of carbon emissions, geothermal is cheaper."

Cook told POWER that the Thermo Plant already had begun the commissioning process in October and was expected to complete it by late November or early December. The plant will generate electricity during commissioning. Once it is officially commissioned, it will start running 100% of the time.

Raser Technologies settled on the plant’s location in Beaver County, Utah, for a number of reasons:

Raser Technologies also has lined up a customer to purchase the electricity that will be produced once the geothermal plant become operational. "We signed a 20-year power purchase agreement with the city of Anaheim, California," Cook said. "They will pick up the power in Beaver County and take it to California. Because this is a renewable energy source, they get credit for meeting the required portfolio standard that the state of California has in place."

Unlike some renewable power generation facilities, the Thermo Plant does not have a problem with grid access. "We built about six miles of transmission lines to connect to the grid," Cook said. "We have not experienced any interconnectivity issues to date."

Raser Technologies sought permitting for the geothermal plant on both state and county levels. According to Cook, the plant will also be regulated by the utility industry to a certain extent. He said that the plant’s developers did not face any unusual regulatory hurdles.

"Construction costs will be approximately $35 million," Cook said. "Thermo will receive $26 million of debt financing and $25 million of tax equity capital. Both are funded by Merrill Lynch."

Utah has a small production tax credit (PTC) that will accrue with the power generation, according to Cook. The plant also will qualify for the federal PTC.

The Thermo Plant set a record for the speed of its construction, according to the Raser Technologies executive (Figure 3). "This is the first time that a commercial geothermal power plant has been built in less than six months," he said. "We broke ground in May 2008 and will have a ribbon-cutting ceremony later this month — October 2008." 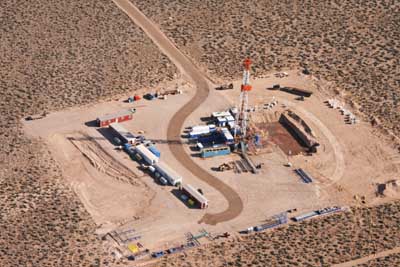 The company’s unique rapid deployment strategy, according to Cook, utilizes UTC power generating units that are manufactured off-site and shipped to the project ready to be hooked up and operated (Figure 4). The 10-MW facility combined 50 modular, low-temperature PureCycle power units from UTC Power, allowing power plant construction to be completed in just a few months. These turbine-generator modules function as small individual power plants. Thermo is the first commercial-scale project to use the UTC units and will act as a template for developing a number of cookie-cutter 10-MW projects in a rapid deployment fashion. 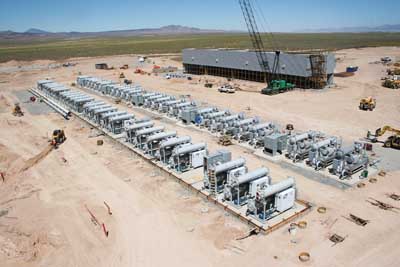 UTC Power’s geothermal power system was recognized in 2007 by R&D Magazine as one of the 100 most technologically significant products introduced during the prior year. This new breakthrough technology offers the following advantages:

Once the plant is on-line, a minimal staff will handle simple maintenance operations, according to Cook. Raser has a guarantee from UTC that the manufacturer will maintain the generation units on an ongoing basis.

Generating facilities powered by very hot geothermal reservoirs of about 350F or higher are called flash steam plants. But the water temperature in the geothermal reservoir at the Thermo Plant site is not high enough to produce steam with the pressure needed to efficiently turn a turbine-generator. Because of its lower water temperature, the Thermo Plant will utilize binary-cycle technology, Cook said.

In the binary-cycle process, geothermal water heats another liquid, such as isobutane, which boils at a lower temperature than water. The two liquids are kept completely separate through a heat exchanger that is used to transfer heat energy from the geothermal water to the "working fluid." The secondary fluid vaporizes into a gaseous vapor and, as with steam, the force of the expanding vapor turns the turbines that power the generators. According to Cook, the second liquid used at the Thermo Plant is "RU134 — UTC refrigerant."

With the binary-cycle process, water from the geothermal reservoir well remains in a closed loop and never comes in direct contact with the surface land, air, or turbines. It is returned to the well unchanged and uncontaminated. Because of this, binary plants operate with little or no emissions or greenhouse gases (Figure 5). According to the GEA, such recent advances in geothermal technology have made possible the economic production of electricity from lower-temperature geothermal resources, at 212F to 302F. 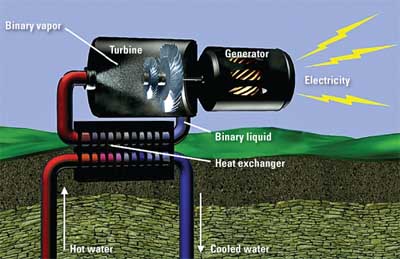 5. Playing a supporting role. In the binary-cycle process, geothermal water is used only for its heat, not to produce steam. In a heat exchanger, the water’s heat transfers to a second fluid, which flashes to vapor and drives the turbine. Source: Geothermal Education Office

The folks at Raser Technologies are optimistic about the outlook for geothermal energy in the U.S. "I would again refer you to the number of studies that have been done by USGS, the DOE and MIT," Cook said. "Because geothermal is baseload, it has the ability to become a significant portion of the nation’s overall energy plan. Their studies show that geothermal can be 10% to 20% of the nation’s overall energy production."

His upbeat attitude extends to his expectations about the future of the Thermo Plant. He pointed out that recent analysis of overall resources at the Thermo location indicates that it has potentially more than 230 MW of additional geothermal resources. Raser Technologies believes that there will continue to be a number of construction and drilling jobs on the site for several years to come as it further develops and builds additional geothermal plants.

When asked for his estimate of the long-term production potential of production wells at the Thermo Plant, Cook responded, "The UTC units are built to last 35-plus years. The geothermal fluids are engineered to last at least 10,000 years."