In June, the 2.3-MW Hywind facility, the world’s first large-scale floating wind turbine, was towed to a North Sea location with a water depth of about 220 meters (722 feet) and began operation. Over the next two years this turbine will be subjected to strong wind and waves in a harsh ocean environment in an effort to thoroughly test the innovative technology.

Located off the beautiful, yet severe Norwegian coastline, the Hywind Floating Wind Turbine is making history as the first large-scale wind turbine supported by an underwater floating structure similar to ones used by off-shore oil rigs (Figure 1). The turbine’s vital statistics include a height of about 65 meters (m) or 213 feet and a rotor diameter of 82 m. The facility is placed offshore about 12 km (7.5 miles) southeast of Karmøy, an island that was once a major headquarters for Viking chieftains around 1,000 A.D. 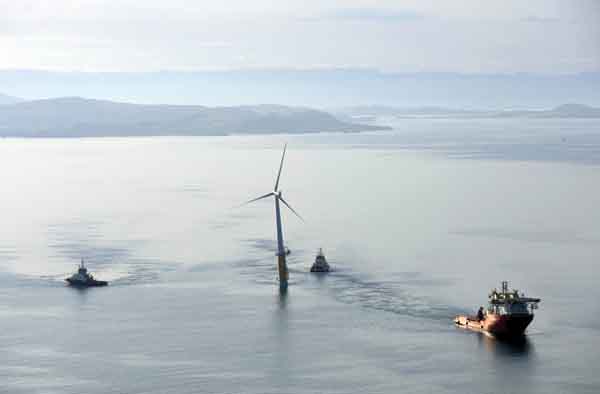 1.    Combining wind and waves. The Hywind Floating Wind Turbine is the first large-scale wind turbine that is supported by an underwater floating structure similar to ones used by off-shore oil rigs. Courtesy: StatoilHydro

Just like their Norse predecessors — famous explorers who conquered many new frontiers — Norwegian energy companies such as StatoilHydro are moving in new directions with breakthrough technologies. "We’re inaugurating the pilot facility which could help floating wind turbines to make an important contribution in the longer term to meeting the world’s big demand for energy," said Margareth Øvrum, executive vice president for StatoilHydro’s Technology & New Energy (TNE) Division in a statement released in June.

"Floating wind power remains an immature technology, and the road to commercialization and full-scale construction of wind farms will be long," she said. "Our goal with the Hywind pilot is to test how wind and waves affect the structure, learn how the operating concept can be optimized, and identify technology gaps."

Sjur E. Bratland, asset manager of StatoilHydro, discussed the Hywind project with POWER in October. "The total cost for the project was about 400 million Norwegian kroner (NOK) [approximately US$71 million]," Bratland said. "However, the Hywind demonstration project is a one-time prototype, and the cost of the prototype does not reflect the cost for commercial production of the Hywind Floating Windmill, which will be significantly lower."

StatoilHydro invested 341 million NOK in the project, and Enova provided approximately 59 million NOK. The latter is a state-owned company that promotes environment-friendly changes to energy production and use in Norway.

Siemens Wind Power in Denmark manufactured the turbine, while France’s Technip built the floater (see the online version of this article for a photo of this structure before it was submerged), and Nexans produced and laid the power cable to land. Following assembly in the Åmøy Fjord near Stavanger, the Hywind pilot was towed in June to its current location near Karmøy island for the two-year test period (Figure 2). In August it was connected to the local grid and started producing power. 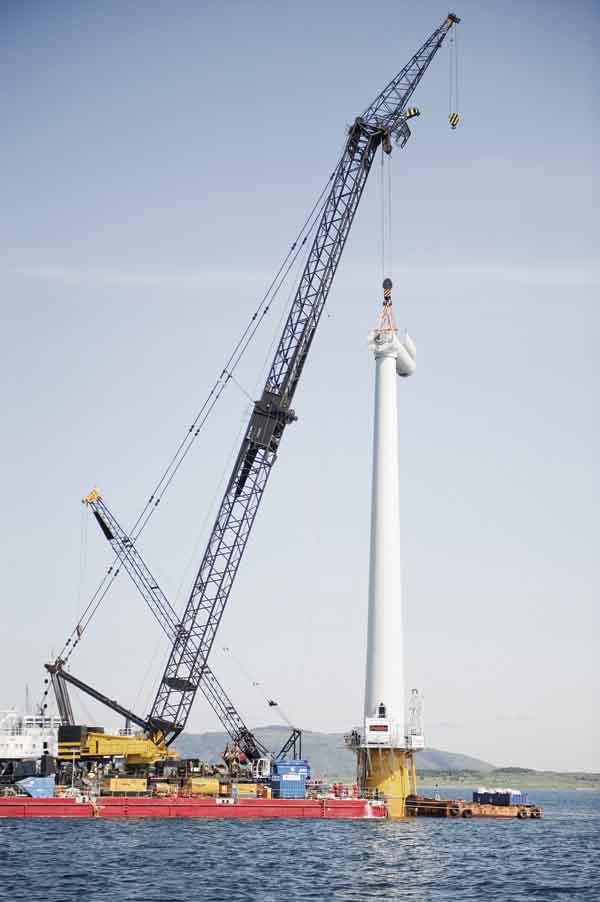 Hywind is a good example of the way StatoilHydro has used its extensive experience in the offshore oil and gas business and applied it to tackling renewable energy projects. The Hywind Floating Wind Turbine was delivered within budget and on schedule. Also on a positive note, no serious health, safety, or environmental incidents occurred during the project’s development.

Today power generation in Norway is based mainly on renewables, with over 99% coming from hydropower. During dry periods, Norway imports power mainly from coal-fired and nuclear power plants. Development of the hydropower infrastructure, however, has been almost fully exploited.

Norway also has substantial fossil resources and is the world’s second-largest oil exporter. Oil and natural gas production has been increasing steadily. And Norway still owns approximately half of the remaining reserves of oil and gas in Europe.

"Today Norway is more or less self-sufficient with hydro power," Bratland said. "It is, however, politically stated that there will be no more major hydro power developments in Norway. There are regional challenges when it comes to power supply, in addition to anticipated growth in consumption. We believe that wind power may become an important power source in Norway to cover for the expected growth in power consumption, to improve regularity in combination with hydro and help solving regional power supply issues. However, the main opportunity for wind power in Norway, especially offshore wind, is to become an exporter of power to the rest of Europe."

Norway is not yet a member of the European Union (EU). However, the Scandinavian country has a strong relationship with the EU and its member states that enables it to maintain a high level of economic integration and political cooperation with those nations. Norway is a signatory to the European Economic Area European Free Trade Association (EEA EFTA), which enlarges the EU market to include all nations that have entered into the agreement.

The whole structure of the Hywind prototype wind turbine weighs approximately 5,300 metric tons and is designed to be suitable for water depths between 120 m and 700 m.

"This is a site chosen for performing a verification over two years," Bratland said. "The short distance to land reduces the cost for cables and traveling time to the turbine. The site gives us excellent conditions to perform the test."

The long-term goal is for floating offshore turbines to eventually be installed at sites with greater water depths. The anchors, to which the turbine is eventually attached, are pulled approximately 10 m down into the seabed, rather than lying on the seabed as a ship’s anchor would. A block, which is a weight element, is attached to each of the mooring lines. For this location, the project team developed a site-specific foundation.

One of the expenses involved in this project was electric cables, the cost of which is more dependent upon the distance to the shoreline than on water depths.

The Hywind project relies on a slender cylinder that is somewhat similar to the "spar buoy" concept, which is a patented underwater floating structure of steel and concrete with ballast tanks — a method that has been used for offshore rigs in the oil and gas business for many years. The floating structure is a long steel pipe that measures approximately 117 m long, with a bottom at one end and a flange for the turbine at the other end. 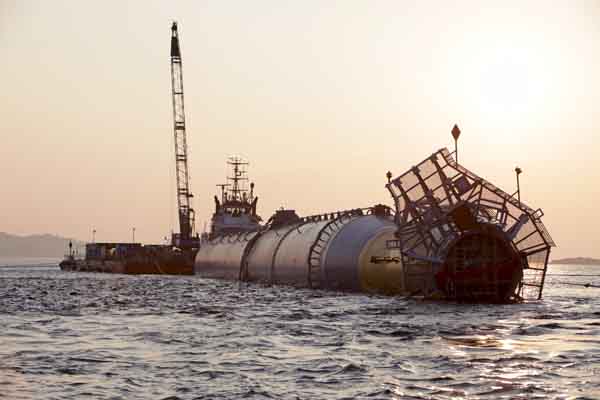 3.    In transit. The turbine’s floating structure is shown being towed horizontally to Norway, where it was upended in the North Sea and filled with olivine sand. Courtesy: StatoilHydro

The center point of gravity is below the surface of the seabed, which prevents the turbine from rocking backward and forward in rough seas.

"The Hywind turbine is serviced by local Siemens service technicians," Bratland said. "They are assigned to the job, but their main activity is service of onshore wind turbines."

The position of Hywind is constantly monitored by GPS, and the mooring system will be inspected in accordance with an established maintenance program. Further, the motion of the Hywind structure, all mooring loads, structural loads on the main tower, and ballast tank levels are monitored in real time, so any deviations from the calculated figure will call for further investigation and inspection by StatoilHydro.

The local community, including the mayor, has supported this project in a very constructive way, explained Bratland. The local effect of the Hywind project has been mainly positive publicity.

At this time, StatoilHydro does not have any serious concerns about environmental impacts of the project on birds and wildlife. "Hywind is only one turbine that will be tested for two years," Bratland said. "The authorities have therefore not required any detailed investigation in environmental issues for that particular site. Of course this will be an issue if we go for a larger park."

Sjur E. Bratland, asset manager of StatoilHydro, noted that other entities are also working on floating wind turbine projects. "For example," he said, "there is the Sway concept, in which StatoilHydro plays a part."

Sway is a Norwegian renewable technology company with leading competence related to floating wind turbines located in deep water. The company has applied for a test concession from the Norwegian Water Resources and Energy Directorate for constructing a test turbine in Naturgassparken in Øygarden, which is located on the west coast of Norway.

Construction of the Sway prototype will be conditional on financial support from Enova, a public enterprise owned by the Royal Norwegian Ministry of Petroleum and Energy. The 10-MW wind turbine will have a rotor diameter of 145 meters, which will make this test turbine among the world’s largest. Although it will be used offshore, initially, Sway wants to test it onshore for two to five years. The turbine will be removed when testing is completed.

"The attractive simplicity of the Hywind slender cylinder concept comes at a price," Stiesdal said. "It is moored and sits on a floating foundation, and the motion of the sea causes the tower to pitch. Such pitching movements add to the fatigue loading of the structure."

Creating solutions for a floating structure has been one of the core elements of the Hywind concept, Stiesdal explained. As a consequence, an advanced adaptive regulation has been developed, using the pitch system of the rotor blades to stabilize the movements. That development both improves power production and minimizes loads on the blades and the tower. The software that controls this process is able to measure the success of previous changes to the rotor angle and uses that information to fine-tune future attempts to dampen wave-induced movement.

The regulatory framework for offshore wind turbine projects in Norway is not yet in place. The consultation paperwork for legislation on offshore renewable energy production was set for public hearing in February 2009 but has not yet taken place.

"Lack of regulations for offshore wind has been a challenge for the Hywind Project," Bratland said. "Close cooperation with The Norwegian Coastal Administration and The Norwegian Water Resources and Energy Directorate has been necessary for solving several challenges linked to the installation of the Hywind demonstration project such as the location of cable and installation and highlighting of the floating wind turbine."

Because this is a two-year research and development project, only a short version of the standard application for onshore turbines was required, Bratland explained.

If this innovative project is successful, we may see Norway became famous not just for its Vikings but also for a new type of ocean-focused activity that increases the nation’s prosperity.