The Environmental Integrity Project, a Washington-based advocacy group, announced in March that CO 2 emissions from U.S. power plants increased 2.9% last year over 2006 levels. The group used 2006 and 2007 CO 2 emissions data from the U.S. EPA and the DOE’s Energy Information Administration.

It’s hard to normalize CO 2 numbers — and easy to politicize them — because emissions levels depend on various factors, including the economy and the weather. For example, the group’s report took pains to point out that U.S. electricity demand "only" grew 2.3% last year. But it neglected to mention that that figure represented twice the growth rate in 2006 and was the highest in the past several years. Last year, U.S. gross domestic product grew 3.4%. Even California’s CO 2 emissions grew more than 12% last year, compared with 2006.

Another example: Earlier this year, President Bush cited a 1.3% decline in overall U.S. CO 2 emissions in 2006, compared with the prior year. But much of the decline was attributed to a mild winter and a cool summer that lowered demand for electricity used for heating and cooling.

With all the competing data, it’s difficult to correlate numbers from one source with those from others, especially for power plants. Now, for the first time, the CO 2 emissions of 50,000 plants worldwide have been compiled into a comprehensive database called CARMA — Carbon Monitoring for Action. The downside of the database is that it considers CO 2 emissions only from power plants, which account for about 25% of total anthropogenic emissions.

The online database — compiled by the Center for Global Development (CGD), an independent policy and research organization — identifies the plants with the largest volumes of CO 2 emissions, and their emission levels. It also lists the plants’ owners.

The database and its web site (www.carma.org) rank individual power plants and plot their location by latitude and longitude. Also available are maps that compare the total power-related emissions of cities, states, provinces, and entire countries (see figure). For the U.S., CO 2 emissions data are also given for congressional districts, counties, and metropolitan areas, making it possible for the first time to compare generation-related emissions by locality. 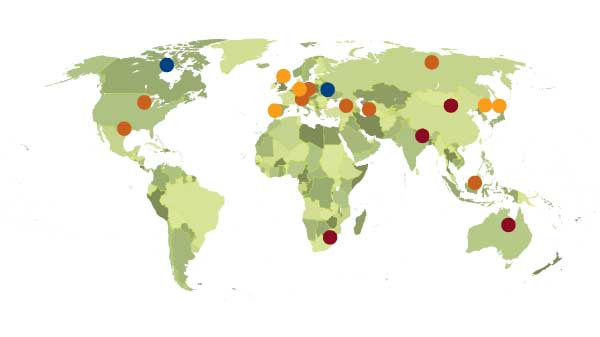 Finally, the database ranks the world’s more than 4,000 power companies on a global, national, and sub-national basis. Company-level data include total CO 2 emissions and generation in 2007, as well as estimates of changes expected to result from planned capacity expansions. The CGD says it will update the data regularly as existing plants change ownership, new plants come on-line, and old plants are retired.

The Good, the Bad, and the Ugly

On a per-capita basis, the Australian power sector is one of the biggest CO 2 emitters in the world, producing more than 11 tons of CO 2 emissions per person annually. The American system isn’t far behind, at more than 9 tons per capita. Populous developing nations have far lower per-capita emissions. For example, the average Chinese citizen’s electricity consumption causes the emission of 2 tons of CO 2 from power plants annually. Indians "emit" (by proxy) about one-half ton per person per year.

CARMA data come from government reports and often from individual plants. When CO 2 data aren’t directly reported, CARMA estimates them using a statistical model that takes into account the type and age of a plant, the fuel it uses, and its total generation. Although CARMA says the estimates have a 90% or greater confidence level, additional details of the calculation technique are not clearly stated. Accordingly, users of the database should confirm its figures by consulting other data sources.

Globally, power generation accounts for nearly 10 billion tons of CO 2 emissions per year. The U.S. — with more than 8,000 power plants of the more than 50,000 worldwide — accounts for roughly one-fourth of that total, or 2.8 billion tons (Table 1). 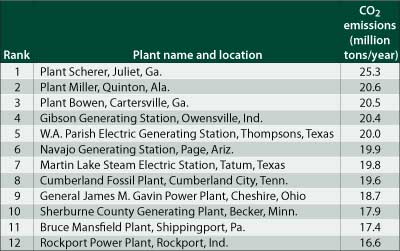 Table 1. The 12 U.S. power plants with the most CO2 emissions are, not surprisingly, all coal-fired plants. Source: Center for Global Development.

According to CARMA data, the Ohio River Valley, the southeastern U.S., and Texas are America’s "dirtiest" regions, in terms of CO 2 emissions. The region with the least impact on global warming is the West Coast, which gets most of its power from nuclear and hydro plants.

Browsing CARMA reveals how different approaches to power generation can make huge differences in emissions. For example, the CO 2 output of power plants in California, with 36 million people, is nearly the same as that of North Carolina, which has only one-fourth the population of the Golden State. Why? North Carolina gets about half of its power from coal, while California relies on a mix of natural gas – fired, hydro, nuclear, and renewable energy generation.

Digging deeper to the local level of the database produces singular insights. For instance, residents of Austin, Texas — including faculty and students on the main campus of the University of Texas — have the least-green power supply of any American college town; power plants supplying Austin emit a whopping 400,000 tons of CO 2 each year.

One surprise in the data is that most of the world’s biggest emitters of CO 2, in absolute terms, aren’t power producers in rich countries but, rather, those in rapidly growing economies with large coal plant construction programs (Table 2).

Table 2. The world’s least-green power producers are ranked by their volume of CO2 emissions. Source: Center for Global Development

Capturing and formatting data in nice graphics and neat tables begs the obvious question: What does this have to do with me and my job? The short answer is: Follow the data. The game plan for those who oppose new coal-fired generation is to develop a "neutral" repository of derived CO 2 emissions data and then reference that data source when proposing new carbon rules or opposing new plants. Don’t dismiss the data out of hand because it has many obvious errors. Its importance has nothing to do with its accuracy but, rather, with the number of times it will be quoted by the press or other organizations.