In recent years, Sargent & Lundy has evaluated many potential sites for new coal-fueled generation. Some of the sites studied were lands adjacent to existing power plants (brownfield sites); others were undeveloped greenfield sites. The numerous technical, environmental, economic, and regulatory issues that bear on power plant siting generally apply to both brownfield and greenfield sites.

From an environmental standpoint, the odds are now better than even that national legislation will be enacted to require future power plants to reduce or mitigate their emissions of CO 2, most likely by using carbon capture and sequestration (CCS) techniques (see sidebar, end of story). Some states have already introduced their own CO 2 legislation, and many utilities are now planning for future curbs on CO 2 emissions.

That said, the remainder of this article examines the current known constraints to finding the best site for a new coal plant.

One of the primary considerations in power plant siting is the fuel source. Any new coal-fueled power plant must be located close to a railroad line, a navigable waterway, or a working coal mine. Delivering mine-mouth coal to a power plant by conveyor or truck is usually the least expensive supply method, followed by barge and rail delivery (Figure 1). 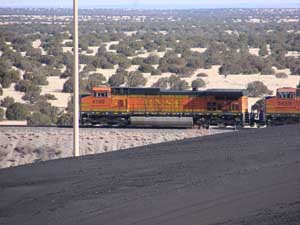 1. Railroads are the lowest-cost way to deliver coal to most parts of the U.S. A plant’s delivery costs can be reduced by siting the plant where there are competing rail carriers. Source: COAL POWER

When considering a mine-mouth plant, the availability and adequacy of the local coal must be fully evaluated and the quantity of the accessible coal must be sufficient for the planned life of the power plant. Even mine-mouth plants are vulnerable to fuel supply disruptions — from mining problems and labor disputes.

For barge delivery, the river or lake used by the barges must be at least 9 feet deep at the unloading dock to accommodate year-round delivery without frequent dredging; a dock location at a sharp bend in the river may be subject to natural silting. And the barge area must be sufficiently straight and long to allow a 12-barge shipment. Three barges require at least 2,000 feet of relatively straight shoreline.

When coal is delivered by rail, the plant site should have enough space to accommodate a unit train of up to 130 cars in a rail loop or ladder track formation. There should be enough track for the entire train to be unloaded without blocking the main line. When planning a new rail spur from the main line to the plant site, the slope of the grade should be no greater than 0.05%.

Any new rail facilities should be sited to minimize grade crossings, which could affect on-site and off-site traffic. Conflicts with ash trucks and other plant vehicles can be mitigated by ensuring that access roads are not blocked by an unloading train.

Characteristics of Coal and Other Materials

Coal characteristics play an important part in power plant siting. For PC and CFB plants, a coal’s heating value and moisture and sulfur content will be needed to determine the size of the boiler, pollution control equipment, and the plant’s coal pile. At the plant, the throughput of coal and reagents, such as limestone and activated carbon, will affect the quantity of combustion by-products that will require recycling or transportation to a landfill.

A new PC or CFB plant will require the bulk delivery of reagents for the pollution control equipment. They include:

Like coal, these materials can be delivered by barge, rail, or truck. The availability of multiple sources of these reagents and the ease of delivering them will significantly affect their cost.

In addition to coal, an IGCC plant requires particular feedstocks. Most IGCC plants will need access to enough natural gas for start-up and operation when the gasifier is out of service. Consequently, a nearby high-pressure gas pipeline would be very advantageous to the siting of an IGCC plant. Depending on the coal type and gasification technology used, an IGCC plant may also need to use limestone to control the coal ash fusion temperature. Finally, some IGCC plants may need an SCR system that requires regular deliveries of ammonia or urea.

Water for Cooling and Other Uses

Increasingly, the availability of water for power plant cooling, boiler makeup, and use by FGD and other systems is a major consideration in power plant siting. To comply with Clean Water Act Section 316(b) regulations, many new plants will have to use a closed-loop cooling system based on cooling towers or an air-cooled condenser. The quality of the water source will determine how much it needs to be treated.

Typically, plants in the Midwest use water from lakes or rivers. Coastal plants can use untreated seawater for cooling by installing an open-cycle cooling system. Water for other purposes would have to come from a desalination plant.

In most cases, a natural lake or man-made reservoir can meet all of a power plant’s water requirements. However, unless the plant owner also owns the lake or reservoir, it will need to obtain water rights from a governing body such as the U.S. Army Corps of Engineers, a state’s Department of Natural Resources or equivalent agency, or a local administrator.

If you’re proposing to use groundwater in a new plant, be aware that permitting requirements for withdrawing groundwater vary considerably from one state to another. Some states only require registering the well, but others may insist on extensive aquifer modeling and analysis in addition to acquiring water rights.

Another important consideration in plant siting is how the cooling system’s effluent will be discharged. Such discharges often contain the same minerals found in the source water, but at concentrations 5 to 10 times higher. In some locations, ambient water quality standards and anti-degradation requirements could make permitting of a concentrated discharge virtually impossible.

If a river or lake will receive effluent, the plant’s outflow should be located far enough from its intake to minimize recirculation of thermal plumes. Power plants proposed for arid regions may not be able to discharge wastewater to a river if its flow is low. In these cases, a zero liquid discharge system, employing evaporation ponds or brine concentrators, may be necessary. Some plants may be able to dispose of their wastewater by injecting it into deep underground geologic formations.

The typical 1,000-MW coal plant needs about 1,000 acres of space for the plant itself and for containing storm water runoff from coal piles and other bulk storage areas. Detention ponds should be sized using local precipitation data and to comply with local regulatory rules. If the plant is to be sited adjacent to a river, most of its facilities, including any landfills, should be built at elevations above the flood plain.

Ideally, the physical space to be occupied by the plant and its rail and coal storage facilities should be relatively flat. To allow for adequate drainage and to minimize pre-construction earthwork, the slope of the site should be between 1% and 5%. A solid waste landfill can be located in a hilly area, but doing so would require a full evaluation of the impacts on drainage and the groundwater table.

The properties of a proposed site’s soil also are very important because they will determine whether equipment can be placed on a shallow mat foundation or will require deep pile foundations. Calculations of the minimum allowable soil-bearing capacity should assume 1 inch of total settling and take into account the weight of the heaviest equipment. If these calculations find that the allowable soil-bearing pressure is less than the heaviest load, a deep pile foundation will be needed.

Even if a plant proposes to use an existing line, its increased loading will affect the stability of the grid that the line is part of. As a result, the interconnection of a new plant may require upgrades to the transmission network (Figure 3). 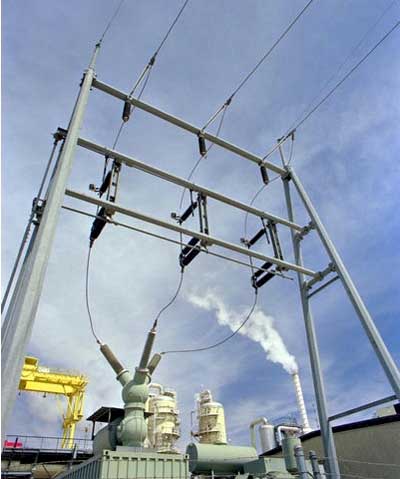 The impact on air quality of a new plant has become perhaps the most critical aspect of its environmental siting factors. Anticipated emissions in the surrounding area and downwind of the plant must be evaluated using models and lots of meteorological and ambient air quality data.

Several factors determine a new power plant’s impact on air quality. They include local atmospheric conditions and weather patterns, the site’s topography, and the plant’s design. During the site selection process, one of the first considerations is whether the proposed plant will comply with National Ambient Air Quality Standards. Siting a plant in a nonattainment area with stringent emission control limits would complicate obtaining an air permit.

A plant’s impact on air quality is not its only ecological impact. A new plant may:

The presence of wetlands or streams at a proposed site can trigger additional permitting requirements. A Section 404 permit from the U.S. Army Corps of Engineers is required to fill jurisdictional wetlands or streams beyond certain minimal quantities. An early assessment of potential wetland areas at proposed sites is possible by examining National Wetlands Inventory maps produced by the U.S. Fish & Wildlife Service. Once property access has been obtained for one or more sites, a more detailed on-site delineation of wetlands and streams by a trained ecologist still may be needed.

— This article is based on a paper by Timothy P. Krause and Daniel L. Marmer of Sargent & Lundy presented at the ELECTRIC POWER 2007 Conference & Exhibition.