An optimal coal pile design takes into account the site-specific (and often conflicting) needs of a new power plant early in its design — rather than using whatever land is available after the plant layout has been finalized. Determining site requirements necessitates a detailed analysis of all potential coal-fueling options. A coal pile designer should ask: Will fuel blending or fuel switching be used in the future to enable the plant to cut costs or to reduce its SO 2 emissions? How much land is available? How will coal be delivered?

The answers to these and other questions usually result in the choice of a conventional longitudinal or circular coal pile layout. Both types have pros and cons. Regardless of the type chosen, every coal pile design must have the flexibility to handle coals of various quality and makeup, as is clear from the following four case studies of coal pile or terminal design in Europe, Australia, and Asia. Each of the coal storage facilities was recently supplied and commissioned by Sandvik.

For several decades, Sandvik Mining and Construction has supplied bulk coal terminals to utilities and other customers worldwide. What these facilities share are the three primary functions they perform: to store coal, to blend different coals, and to homogenize the pile for reclaiming (see "What All Coal Piles Have in Common").

Each case study overviews the facility’s main selection criteria and explains how they are reflected in the choice of different coal pile management equipment. The case studies are intended to give coal pile designers everywhere insight into what their peers are doing.

The 192-MW Plomin Power Plant (Figure 1) on the Adriatic Sea is jointly owned by Germany’s RWE Power and Croatia’s state-owned utility. When the plant’s demand for coal could no longer be met by an adjacent mine, the owners began importing coal from overseas. This change required more than tripling the capacity of the plant’s coal yard from 32,000 to 114,000 tons and nearly quadrupling the stacking speed of the stacker/reclaimer serving the yard’s longitudinal coal pile from 350 to 1,200 tons per hour (tph). For this project, Sandvik supplied the new stacker/reclaimer and built a 6,000-foot-long conveyor to bring coal from the jetty to the yard. 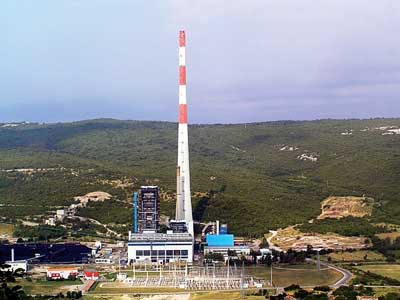 1. This power plant in Plomin, Croatia, recently got a much bigger coal pile and a new stacker/reclaimer that can replenish and deplete it more quickly. Courtesy: David Orlovic/Wikimedia

The new stockpile isn’t just bigger, it’s more versatile, too. Thanks to the new stacker (Figure 2), it can store coal of different grades separately or in layers. As a result, either separated or homogenized coal can be reclaimed and fed to the plant’s coal bunkers, depending on the day’s firing requirements. 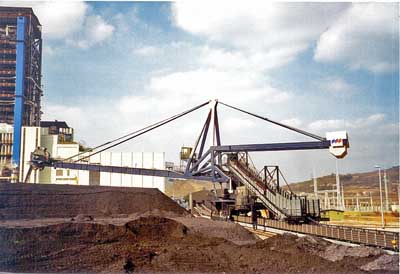 The high stacking throughput of the new Sandvik unit allows a coal vessel of 60,000 deadweight tons to be unloaded in only three days. During this process, which typically occurs once a month, a bypass conveyor takes over feeding the bunkers so the plant can continue producing power. Normally, reclaiming is done at intervals to keep the bunkers full. The speed of reclaiming is limited to 350 tph by the small size of the existing conveyor between the coal yard and the bunkers (Figure 3). 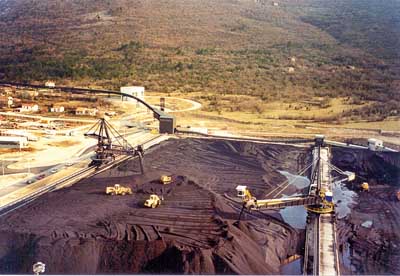 3. This bird’s-eye view of the stacker/reclaimer at Plomin Power Plant shows the boom, which is 135 feet long and can reclaim coal at the rate of 350 tons per hour. Courtesy: Sandvik

The Port of Koper in Slovenia decided to build a coal terminal to allow it to receive shipments from large vessels and break them down into barge-size amounts for delivery to local users. The project’s main requirements were high stacking and reclaiming throughput, the flexibility to handle different grades of coal, and low capital cost (reflecting the relatively few hours a year that the system would operate).

The key elements of the final design were a longitudinal stockpile and a rail-mounted, bucket-wheel machine (Figure 4) that can stack coal at 1,500 tph and reclaim it at 2,200 tph. The longitudinal pile layout and the mobility of the stacker/reclaimer make it possible to store various grades of coal at different locations in the pile. The bucket wheel design was chosen for its ability to handle coals with a range of physical characteristics. The final design requirement — low cost — was met by the choice of a combined stacking/reclaiming unit. 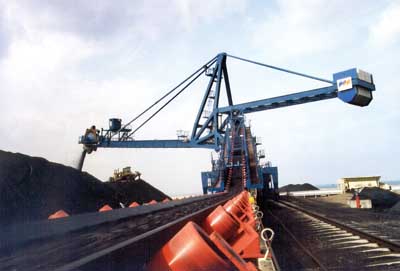 4. A bucket wheel-type combination stacker/reclaimer at work at the Port of Koper, Slovenia. Courtesy: Sandvik

Case #3: Coal Terminal for Australian Mine

The Callide Coal Mine in Queensland, Australia, owned and operated by Shell Coal, wanted to build a terminal to facilitate the storage, homogenization, and load-out of "run-of-mine" coal. As is typical for a mine load-out facility, the key requirements of the proposed terminal were a high storage capacity, the ability to stack and reclaim at the same time, and excellent homogenization of different coal types.

The terminal design chosen features a longitudinal stockpile and a traveling, luffing, and slewing stacker that can form and layer the pile at 2,100 tph in either a windrow or chevron formation (Figure 5). To maximize the efficiency of creating a blended pile, the stacker lays down each layer as it travels in one direction, using the same amount of coal per foot of pile length. 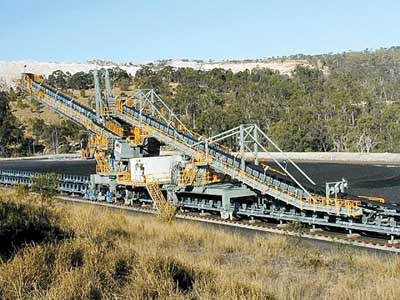 5. This traveling, luffing, and slewing stacker at the Callide Coal Mine in Australia has a maximum throughput of 2,100 tons per hour. Courtesy: Sandvik

Reclaiming of the stockpile is done at 1,800 tph by a portal scraper (Figure 6) that works down the full length of the pile, extracting coal from one side of it onto a conveyor belt on the same side. The design ensures homogenization, a constant reclaim/load-out rate, and the flexibility to reclaim from any stockpile in the coal yard. It also enables a fast modification of blending ratio if a coal customer changes the variability target limits of his or her deliveries. 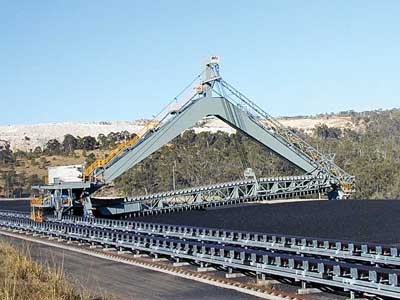 6. The portal scraper at Callide, shown during its erection. The boom is 135 feet long and can reclaim coal at the rate of 1,800 tons per hour. Courtesy: Sandvik

The system for storing, stacking, and reclaiming coal that Sandvik designed and supplied to the Ho-Ping Power Plant — just north of Hualien on the island of Taiwan — had to meet stringent requirements. Among them were the ability to simultaneously stack and reclaim the pile, plenty of storage capacity, and redundant feeding of the plant’s coal bunkers. The Ho-Ping plant is 60% owned by Taiwan Cement Co. and 40% owned by China Light & Power International. Its two 660-MW pulverized coal – fired units were commissioned in 2002.

For storage, the owners went with two circular stockpiles enclosed in domes (Figure 7). Each has a capacity of more than 270,000 tons, making them two of the largest circular coal piles ever built. Coal unloaded from ships is conveyed through the domes near their top to either of two radial stackers, each rated at 3,500 tph, centered inside. Stacking, by a boom roughly 105 feet long (Figure 8), is straightforward because the Ho-Ping units do not burn blended coal. 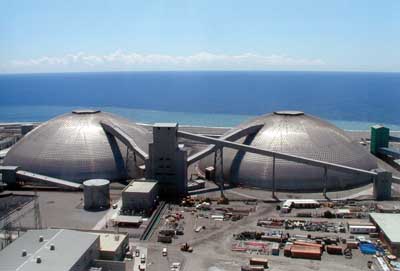 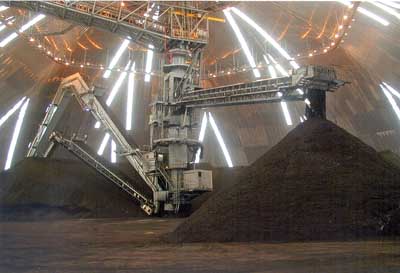 8. Under one of the domes shown in Figure 7, a radial stacker, rated at 3,500 tons per hour, is positioned over its coal pile. Courtesy: Sandvik

Reclaiming is done by a portal scraper, rated at 1,000 tph, that feeds coal onto vibratory feeders located underneath its center column. Separate feeders positioned below each pile keep the outgoing conveyor supplied during reclaimer outages.

Circular coal storage facilities do have several operational disadvantages, beyond the occasional difficulty of retrofitting them to an existing plant layout. For example, pre-homogenization capacity can be increased only by establishing a second stockpile. That leaves no room for error in the initial choice of the pre-homogenizer’s blending capacity. Other potential problems include sticky materials or materials with a high clay content choking the chutes in the central column of the reclaimer, and groundwater making it impossible to build and operate the unit’s discharge tunnel.