The better you can successfully predict what might happen in the future, the better your decisions today. That’s why with this article we begin a periodic series of features on the future of coal power. In this issue we look at one approach to predicting the success of sequestering CO 2 underground, where the coal that released that greenhouse gas came from.

How can anyone make data-driven decisions about the future when we don’t have access to future data? Computer modeling is our best-available option. And that’s what scientists at Los Alamos National Laboratory (LANL) are working on.

LANL may be most famous for its work on the first atomic bomb and subsequent weapons programs, but its scientists are also engaged in a variety of other research projects that require technical expertise, interdisciplinary collaboration, and serious computing power. One of their current projects that affects the power generation industry is a computer model called CO 2 -PENS (PENS stands for "predicting engineered natural systems"). The aim of this interdisciplinary project, which involves a team of scientists led by Rajesh Pawar (Figure 1), is to develop a comprehensive risk assessment framework and computer model to evaluate potential problems associated with the geologic sequestration of CO 2. 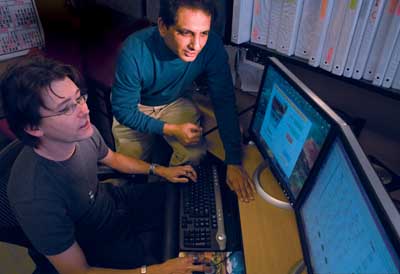 Their modeling draws upon a variety of real-world data, including more than three decades’ worth of information from enhanced oil recovery (EOR) fields near the west Texas town of Snyder operated by SACROC. Researchers are also studying an area in Canada where hundreds of thousands of storage wells have been exposed to acid gas (CO 2 and hydrogen sulfide). Data from so many wells hold a wealth of information relevant to CO 2 sequestration and should generate statistics invaluable to CO 2 -PENS.

Los Alamos scientists learned to predict the movement of fluids in the subsurface during nuclear testing and while planning for nuclear waste repositories. To contain the effects of underground nuclear tests or store radioactive waste beneath the earth for 10,000 years, they had to understand and predict how materials move and react in complex geological systems. Though CO 2 sequestration is far safer than these activities, it still poses potential safety and economic risks.

You can’t be sure CO 2 will stay where you put it because the subsurface is home to a staggering number of chemical reactions, physical processes, and potential escape pathways. But with the proper scientific understanding, you can predict how the CO 2 will behave, quantify the uncertainties in those predictions, and identify the experiments and field observations needed to reduce that uncertainty.

"There’s uncertainty in how fast CO 2 can be injected into a given hole," says LANL hydrogeologist Phil Stauffer, "how fast it will move through porous rock, how fast it will mineralize, and how fast it might leak up through different pathways. We’re trying to reduce those uncertainties so decision-makers can act on a known level of risk."

Scientists can already make fairly good predictions for individual subsurface processes because data and computer models already exist for them. What’s been missing is a way to pull them together into an accurate picture of the whole complex system. That’s the gap CO 2 -PENS fills. It is an overarching program that taps a shared cyber library in which separate process models are dynamically linked. It goes beyond the individual results of each model to reveal how all the many processes affect each other.

For example, if a porous-rock model shows a plume of CO 2 and brine moving toward old cement-plugged oil wells, CO 2 -PENS could pass those results to another model that would calculate the likelihood that the plume will remain contained. If a leak seemed likely to occur near a freshwater aquifer, CO 2 -PENS would update a groundwater-impact model to determine the possible effects on water chemistry. If an atmospheric leak were possible, CO 2 -PENS would access data from an atmospheric-circulation model to show how CO 2 would locally concentrate or dissipate.

CO 2 -PENS also quantifies the uncertainty in its predictions and indicates if it needs more information — from more experiments or more sensors at the site — to decrease that uncertainty. The program will initially be used to select the best sequestration sites, but once a sequestration operation is under way, it will learn from site-generated data and sharpen its predictive accuracy.

It can also help analyze economic risks. For one site, CO 2 -PENS unexpectedly predicted that drilling wells 1 kilometer deep would be less economical than drilling them 3 kilometers deep.

"At 1 kilometer, you needed 80 wells to handle the CO 2 volume from a power plant," Stauffer explains. "At 3 kilometers, you needed only 10 wells because the increased temperature lowered the viscosity of the CO 2, and the higher injection pressure allowed it to slide more easily into the reservoir."

The geologic formations that would store CO 2 have many porous and nonporous layers (Figure 2). The sponge-like porous ones would hold the CO 2. Most of these porous layers already have fluid in them, usually saline water and, in some cases, oil. These fluids will have to move to make space for the CO 2, which is how residual oil is mobilized in EOR operations.

For sequestration, the CO 2 captured from a fossil fuel plant is first compressed until the combined heat and pressure make it "supercritical" — a state in which it displays both gas and fluid properties. When injected, this supercritical fluid diffuses like a gas into the porous rock but takes up less space than a gas because of its fluid-like density. The reservoir layers must be deep enough (under high-enough pressure) to maintain the supercritical state.

Supercritical CO 2 is buoyant and will rise above the other fluids. If it rises high enough (above a depth of 2,600 feet), it will return to a gaseous state, expand, and slip through any available escape route, as indicated in Figure 2 by question marks. To keep this from happening, a sequestration site must have an impermeable cap rock, past which the CO 2 cannot rise. For eons, such trapping mechanisms have worked efficiently to contain natural gas, oil, water, and volcanic CO 2, but even impermeable cap rocks are typically cracked, and the CO 2 could seep up faults or fractures in that ceiling. 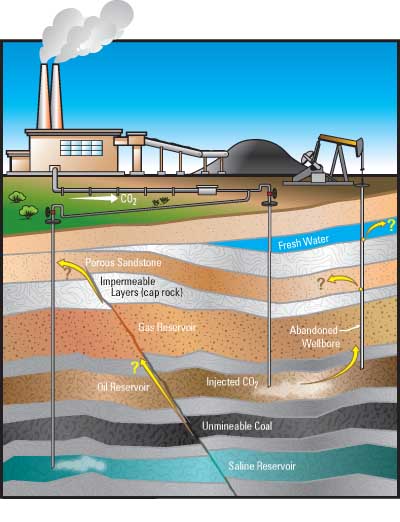 "We’ll need to sequester amounts of CO 2 that are orders of magnitude larger than anything attempted in EOR," explains Stauffer.

Increasing the time and volume of sequestration multiplies the potential risks, which is why modeling information is so valuable.

"Sequestration will be a balancing act between risks and benefits," says LANL chemical engineer Hari Viswanathan. The goal is for CO 2 -PENS to help manage that balancing act. "An existing oil field might seem an economical choice for a site because existing wells would lower drilling costs," says Viswanathan, "but there’s some question about the containment properties of old wells. It may be cheaper in the long term to drill new wells into a saline reservoir where old wells are not piercing the cap rock."

Oil companies typically plug abandoned wells with cement, and since a combination of CO 2 and brine is acidic, there is a risk that the CO 2 -brine solution would eventually eat its way through the plug. Initially, not enough was known to quantify the risk.

To study that issue, Los Alamos researchers recovered cement samples from a SACROC well where cement had been exposed to CO 2 and brine for decades. Laboratory analysis showed that the cement was still an effective barrier after 30 years. CO 2 did migrate along the well hole’s casing and along the nonporous rock above the oil reservoir (the cap rock), but minerals had filled the gaps over time. The results give cause for optimism but also indicate that further attention is needed, given the long timescales involved.

The CO 2 can cause trouble even without reaching the surface. It needs only to escape beyond the cap rock to find pathways through porous layers above. If that happens, it could affect freshwater resources by introducing brine or mobilizing inorganic contaminants, such as metals. It could also seep into nearby hydrocarbon resources, such as natural gas deposits, owned by other companies, resulting in legal and financial penalties.

So there are risks, but tools like CO 2 -PENS, and the accumulated insights from research conducted by many other entities (see sidebar, previous page), promise to make those risks manageable.

The Future Is Now

George Guthrie, program director for LANL’s Fossil Energy and Environment Program Office, says, "Geologic sequestration is being implemented today, and it will take off. The momentum in the last two or three years is just amazing, and there’s a lot of optimism that it will be able to make a dent. Internationally, you see large-scale field efforts proposed and deployed. So far these operations involve natural gas production instead of coal plants because the ability to separate CO 2 already exists as part of the gas-purification process. There is still a lot of economic uncertainty for the electric power industry’s coal-fired plants, but that’s why we’re doing all these pilot studies and experiments."

— Portions of this article derive from a story written by Anthony Mancino for the January 2008 issue of 1663: Los Alamos Science and Technology Magazine.