In its November 2019–issued World Energy Outlook, the International Energy Agency (IEA) suggests that if countries pursue currently stated policies, the combined generation share of wind and solar photovoltaic could surge from 7% today to 24% in 2040. This very steep ramp-up of variable renewables will undoubtedly require an emphatic focus on flexibility—the ability of power systems to respond in a timely way to changes in electricity supply and demand. So far, flexibility has mostly been maintained by conventional sources, including thermal and hydropower plants. Retrofitted coal plants, new gas turbine plants, and hydropower plants will continue to provide the bulk of the world’s flexibility through 2040, but batteries, demand response, and sector coupling are also poised to play pivotal roles in future systems. Several regions will also rely on interconnections to alleviate network congestion, the IEA says.

This infographic compares how generation profiles in the U.S., European Union, China, and India could shift under the IEA‘s “Stated Energy Policies” (STEPS) scenario, which factors in current and already announced policies, and the “Sustainable Development” scenario (SDS), which is fully aligned with the Paris Agreement and has an objective of “holding the increase in the global average temperature to well below 2°C above pre-industrial levels and pursuing efforts to limit the temperature increase to 1.5°C above pre-industrial levels.” Also shown is how the IEA expects these regions’ sources of flexibility will change over the same period through 2040 under the stated policies scenario. Source: IEA, World Energy Outlook, 2019 edition. 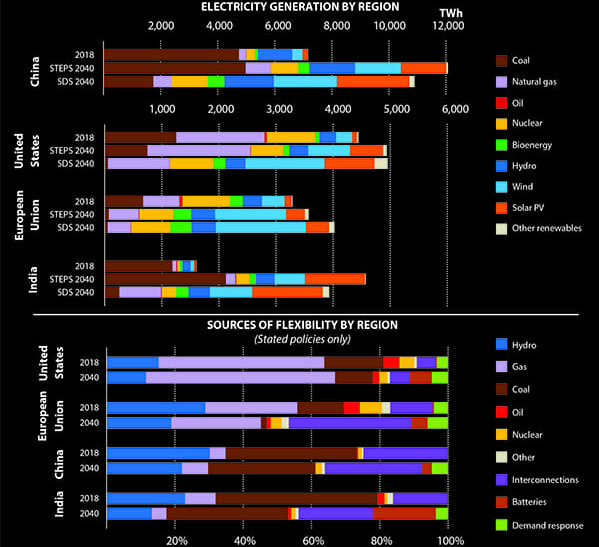