If wind and solar photovoltaic (PV) penetrations in the Eastern Interconnection were amped up to 30%, they would decrease coal, combined cycle, and combustion turbine capacity factors by 30% to 50%, a new study from the National Renewable Energy Laboratory (NREL) suggests.

The study, NREL’s Eastern Renewable Generation Integration Study (ERGIS), was released on August 30. It analyzed a year of operations in the power grid of the eastern U.S. at five-minute intervals—the same real-time intervals used by grid operators for scheduling resources. The study noted that previous studies have investigated operations in one-hour intervals.

ERGIS was commissioned by the Department of Energy, which asked the laboratory to determine what conditions system operators might face if the Eastern Interconnection, which relies on generation fueled by coal, natural gas, nuclear, and hydropower, was transformed into one that relied on wind and PV to meet 30% of annual electricity demand.

Using four power system scenarios, NREL explored how variable and uncertain conditions, caused by wind and solar forecast errors, seasonal and diurnal patterns, weather, and system operating constraints, could affect certain aspects of reliability and economic efficiency. “Specifically, we model how the system could meet electricity demand at a 5-minute time interval by scheduling resources for known ramping events, while maintaining adequate reserves to meet random variation in supply and demand, and contingency events,” it said. 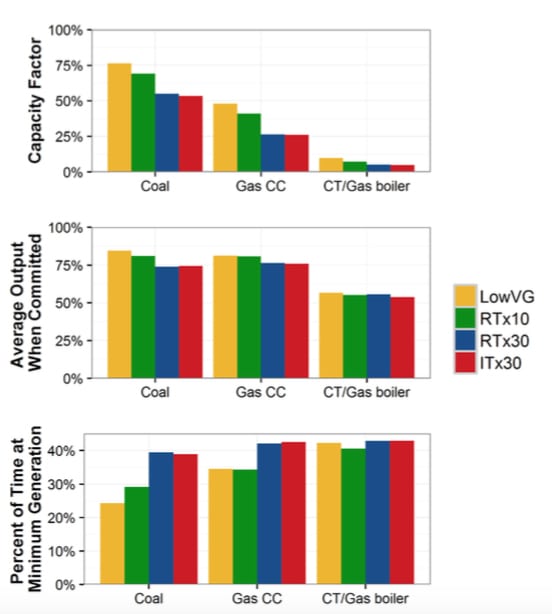 How the Eastern Interconnection’s total fleet of thermal units would perform if wind and solar penetration were ramped up. Source: NREL

Increased wind and solar penetrations would mean more changes in operations in the hours surrounding dawn and dusk. “The morning and evening load ramps have always been a challenging time for system operators and require expensive fast-starting, flexible resources before the addition of wind and PV to the system,” NREL said. “Around high wind and PV time periods, thermal and hydro plants tend to ramp faster and operate for shorter periods of time.”

As more variable generation is added to the system, the study suggests that average daily power flows between regions will change substantially. “Some of the increased flows are due to the increased transmission build out in the [Eastern Interconnection] in our four scenarios, but changes due to the high penetration of [variable generation] are also evident,” NREL said.

ERGIS does not investigate whether transmission and generation operators will have enough incentives to provide necessary ramping, energy, and capacity services to support high variable generation penetration, NREL admits. “While ERGIS shows it is technically possible to balance periods of instantaneous [variable generation] penetrations that exceed 50% for the [Eastern Interconnection], the ability of the real system to realize these futures may depend more on regulatory policy and market design to incentivize the needed operating procedures.”

NREL said it is committed to open energy research and has published the production cost model, underlying data, and visualization tools along with the final report. Those materials can be found here: http://www.nrel.gov/grid/ergis.html.