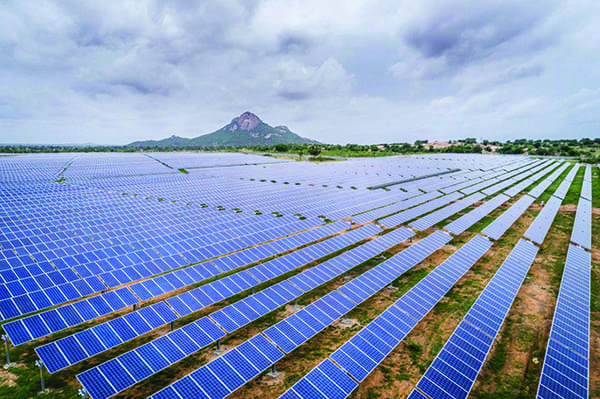 The Veltoor facility in India has been honored for its cutting-edge technology, which helps maximize its energy production. The project also is notable for the developer’s commitment to communities near the plant.

India’s transition toward greater development of renewable energy resources has moved rapidly in recent years, helped by the world’s lowest prices for solar power, according to the International Renewable Energy Agency (IRENA). A 2018 IRENA report said half of the 10 largest solar parks under construction globally were in India.

CLP India Pvt. Ltd., which has operated in India since 2002, has embraced wind and solar power technologies as part of its strategy of greater investment in renewables and low-carbon energy. CLP India is a subsidiary of Hong Kong-based CLP Group, one of the largest investor-owned power businesses in Asia, and Caisse de dépôt et placement du Québec (CDPQ), one of Canada’s leading institutional fund managers. The group is considered one of the largest foreign investors in the Indian power sector.

The 100-MW Veltoor facility is “aimed at becoming a benchmark of excellence in India,” CLP said in an email to POWER. “The plant implemented cutting-edge technology and systems. It was awarded the world’s first-ever solar project quality certificate for a photovoltaic [PV] plant by DNV GL [Det Norske Veritas, a Norwegian global quality assurance and risk management company]. Equipped with the latest tracker technology, the solar panels turn in sync with the sun’s path through the day, maximizing the energy captured from the sun by ~20%. The plant automation system monitors the performance of each string of solar panels helping to maximize their yield.”

CLP said the single-axis sun-tracking system (Figure 1) at Veltoor is the most advanced of its kind being used by the CLP Group. The Veltoor plant’s performance across its first several months of operation, and its place as a model for India’s burgeoning solar power industry, is among the reasons it is the recipient of a POWER Top Plant award for renewable energy.

A recent report from energy consultancy Wood Mackenzie (WoodMac) noted that India’s renewable energy cost is the lowest in the Asia Pacific region. WoodMac said India’s levelized cost of electricity (LCOE) using solar PV has fallen to $38 per megawatt-hour (MWh) this year, 14% cheaper than coal-fired power, which has traditionally been the cheapest source of power generation in the region. LCOE comprises the cost of generating a MWh of electricity, the upfront capital and development cost, the cost of equity and debt finance, and operating and maintenance fees. 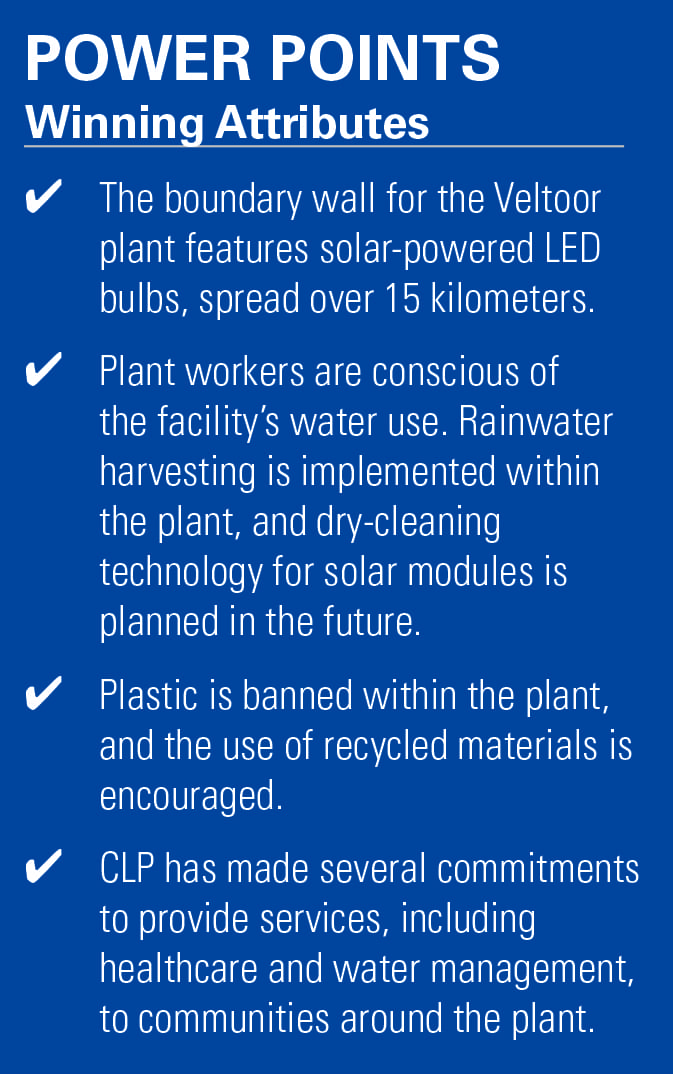 The falling costs have made solar power and other renewables popular investments in India. A study from the International Energy Agency (IEA) and the Council on Energy, Environment and Water (CEEW) said investments in renewable energy in India reached about $20 billion in 2018, doubling over the past five years, and surpassing capital outlays for the thermal power sector. The study highlighted the “reduced risk perception of financiers funding renewable energy projects in India.”

Government officials have set a target of 175 GW of installed clean-energy generation capacity by 2022, with 100 GW of the total expected to come from solar projects. The IEA/CEEW report says those targets will require additional investment of about $80 billion over the next three years, and then $250 billion from 2023–2030.

“Ambitious targets, supportive policies, and falling technology costs have improved the attractiveness of financing utility-scale solar PV and wind projects,” the report says. “By May 2019, utility-scale installed capacity of solar PV [in India] was over 27 GW, and wind was more than 36 GW.”

The Veltoor plant is emblematic of India’s growing solar production. Rajiv Mishra, managing director of CLP India, in a news release mentioned the DNV GL certification—which recognizes high standards for project management and technical compliance—for Veltoor as proof his company’s solar projects are moving in a positive direction with regard to quality and standards.

“The comprehensive requirements of DNV GL’s Project certification provided a clear roadmap for us to ensure the highest quality as we designed and built Veltoor,” said Mishra. “Operational excellence is part of our DNA and CLP maintains the highest-quality standards across all facets of our work. As the only certification body that provided complete guidelines for PV projects, DNV GL has worked hand-in-hand with us to help the Veltoor project meet our quality objectives.”

CLP in its email to POWER said Veltoor “was commissioned progressively,” with the first commercial power production beginning in August 2017. “In this project, the land acquisition and the construction progressed simultaneously. There were some delays caused due to the land acquisition process… CLP wanted to ensure that the land acquisitions were done with due consideration of the stakeholders to respect their sensitivities.

“Safety was given topmost priority with involvement of senior management and a senior officer in charge of safety throughout the project phase,” CLP said. “We recorded zero lost-time incidents (LTI) during the construction of the project, despite the workforce investing more than 1 million man-hours. In addition, several programs, like ‘Sunset Safety meetings,’ ‘Safety Partnership plan,’ and safety walks inculcated a safety culture and maintained the highest standards… [through July 2019] there hasn’t been any lost-time incident during the construction phase and since the plant became operational last year.”

CLP said the plant has digitized its operations and maintenance records, which “optimizes monitoring and resolution. These measures taken have ensured a highly efficient plant with generation exceeding its targets.”

PETE – Hammond Power Solutions supplied the inverter transformer. Vidyut Electricals and Schneider Electric provided the ring main units, and Siemens was in charge of switchgear. Voltamp handled the power transformer, CGL the equipment in the switchyard (substation), and ABB and GE were responsible for the supervisory control and data acquisition (SCADA) system.

CLP, as with many companies that operate in India, is working with communities near Veltoor to “be able to assist with pressing needs.” CLP told POWER: “We are committed to socially responsible growth and to the development of communities around [our] plants. The company’s contributions made through community investment initiatives are mainly focused on enhancing health and sanitation facilities; education and skill building; infrastructure development; and special attention to youth and women empowerment.” The company said some of the initiatives linked to Veltoor are under the “Suryodayam” umbrella.

Water resources are of particular importance, as Veltoor is located in a low-rain area. CLP India has built storage tanks capable of holding 2,000 liters of water in three nearby villages. As CLP told POWER: “Under this, the company has been working on a structured development plan. Due to this region being water deficient, initiatives have been undertaken to ensure water security such as the provision of clean drinking water for catchment villages around the plant by installing three RO [reverse osmosis] plants, around 30 borewells have been installed with recharge through rainwater harvesting, and two aquifer recharge arrangements implemented. Further, a mobile van catering to the healthcare needs of the populace has been deployed.

“In addition, we partnered with the Akshaya Patra Foundation to set up a modern centralized kitchen in Nawabpet close to our Veltoor project, with a capacity to provide mid-day meals to 26,000 children on [a] daily basis. This facility is fully funded by CLP India. Moreover, we are also funding 10,000 meals per day for three years. The program is aimed to enhance enrollment and retention of students in government schools and Anganwadis [child care centers] with an underlying objective to improve nutrition levels among children. We also run a CLP India Scholarship Scheme providing partial financial support to students near the Veltoor plant (and near other CLP assets across India) to complete their school and college education,” the company said.