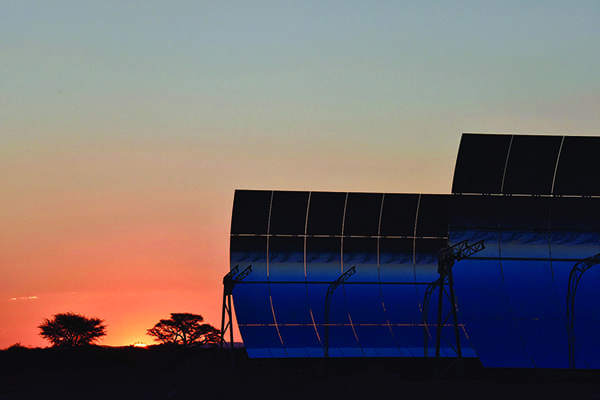 A greenfield concentrated solar power (CSP) project with innovative parabolic trough technology and a molten storage system has revitalized a remote region. But the project is also laudable for its social, economic, and environmental commitment to the unique region.

The sun is characteristic of everything in Kathu, a dusty hamlet at the heart of the Kalahari Desert in South Africa’s Northern Cape Province. The town sprung up in the remote, sunbaked region in the 1970s around a massive open-cast iron ore mine—now one of the largest in the world. Today, it is better known as “the town under the trees,” a moniker that salutes a nearby forest—only two of its kind that exist in the world—of camel thorn trees that jut out from scrub on its rusty-hued sand. The region is also known for its waterholes, stunning sunsets, starry nights, and spectacular thunderstorms.

In January 2019, the region further embraced the power and intensity of the sun and began operating a 100-MW concentrated solar power (CSP) project. The Kathu Solar Park stretches over 4.5 square kilometers (km 2) of a 10 km 2 site, absorbing the sun’s rays through 384,000 mirrors that are part of a state-of-the-art parabolic trough technology system. More notable is that the project is also outfitted with a 1,550-MWth molten salt system capable of storing 4.5 hours of thermal energy.

It means the project can provide “reliable electricity in the absence of solar radiation and during peak demand” to the local community of the John Taolo Gaetsewe District Municipality, the Northern Cape, and South Africa as a whole, say its owners and operators, a consortium led by French multinational firm ENGIE (which owns 48.5%). The consortium also includes a group of South African investors comprising SIOC Community Development Trust, Investec Bank, Lereko Metier Sustainable Capital Fund, and its co-investors FMO, a Dutch development bank; DEG, the German investment and development company; and South Africa’s Public Investment Corp. 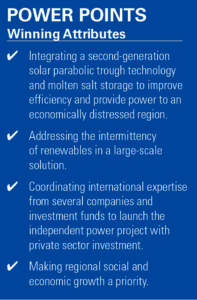 Born in the Shadow of a Crisis

The solar project got its start in 2010 as South Africa was emerging from a debilitating power capacity shortfall, exacerbated in part by underinvestment in power infrastructure by Eskom, the state-owned company that then held a formidable monopoly of the country’s generation, transmission, and distribution assets. It was originally envisioned as a photovoltaic project that would be built in two phases between 2012 and 2014, but it never started, owing to funding setbacks.

In 2011, bracing for another critical power shortage, the government pubished new generation regulations that called for nearly 7 GW of new renewable power capacity. (The country’s latest integrated resource plan adopted in 2018 calls for 11.5 GW of onshore wind, 8 GW of solar PV, and 600 MW of CSP by 2030.) It also established an independent power producer (IPP) procurement program to help new market entrants in the coal-rich nation overcome political and financial barriers, and uncertainties associated with project development. The government ultimately held several bidding rounds under the Renewable Energy Independent Power Procurement Programme (REIPPP), and after its fourth bid window (BW 3.5), it selected the ENGIE-led consortium to build the 100-MW greenfield CSP project in December 2014.

Among the consortium’s first actions were to choose an engineering, construction, and procurement (EPC) contractor. In July 2015, it ultimately awarded the €500 million contract to Liciastar, a joint venture comprising SENER, a private Spanish engineering and technology business group and a notable player in the solar thermal power market, and ACCIONA, another Spanish firm, which has stakes in the entire renewable energy value chain, from design and construction through operation and maintenance. One reason the joint venture was chosen for the turnkey project was it had just wrapped up another solar thermal project in South Africa—the 55-MW Bokpoort plant in the Northern Cape Province, a project that incorporated parabolic troughs with a 1,300-MWth molten salt energy storage facility.

Shining the Light on New Technology

According to ENGIE and its partners, Kathu Solar Park achieved financial close in May 2016, and construction kicked off almost immediately. As SENER told POWER, a key focus during construction was to ensure that the project achieved “a positive and enduring difference through innovation and technology, with high efficiency and performance to deliver energy to the South African grid, particularly during the evening peak.” That’s why developers chose to install SENER’s second-generation parabolic trough technology, SENERtrough-2, in the project’s 250 loops, not the first-generation design installed at Bokpoort.

“The technology of SENERtrough cylindrical-parabolic collectors allows the concentration of the solar radiation in a central absorber tube through which thermal oil is continuously running,” SENER explained. “A high-precision driving system follows the sun during the day from east to west using adequate software and different sensors (thermal, optical, flow, etc.). The hot oil, with 100 degrees of temperature increase, is used to vaporize water which, by means of expansion in a steam turbine, finally drives an electrical generator that injects the energy into the [Eskom] grid.”

But compared to its first-generation trough, SENERtrough-2, which was validated at the Valle 1 and 2 CSP plants in Cadiz, Spain, is larger. It has a carbon-steel structure that is similar to SENER’s original collector technology, comprising a central body (the torque tube), arms that connect the torque tube to the mirrors, and elements to connect the heat collector elements to the torque tube. However, it measures nearly 13 meters (m) long and has an opening of 6.87 m—nearly 25% larger than the original design. This allows projects to use fewer troughs to collect the same amount of energy.

“A reduction in the total number of collectors gives rise to a global reduction in the solar field total cost, as size has been optimized from the perspective of features and manufacture,” SENER noted. The technology also uses stamping technology to provide high precision and repeatability, which also slashes costs, it said.

The molten salt storage facility, also chosen as “an efficient and cost-effective alternative” to other large-scale heat storage systems, is designed to extend the operational capacity of the plant after sunset. SENER, which has developed and proven the concept at several CSP plants, said the Kathu facility essentially absorbs surplus heat from the trough system using two tanks (Figure 1) containing molten nitrate salts. Key to the system is a heat exchanger, where some of the heated heat transfer fluid is pumped, and where it comes into contact with cold salt that has been pumped from the cold-salt tank. The heated salt is then stored in the hot-salt tank. During discharge, the stored hot salt is pumped to the same heat exchanger to heat the heat transfer fluid to continue generating power for up to 4.5 hours. The companies marked a major project milestone in October 2018 with the completion of the salt-melting process of about 45,000 tons of salt, it noted.

The Sun Is Shared by Everyone

The plant was synchronized to the grid on Nov. 18, 2018. As the companies celebrated that milestone, Francisco García Bueno, project director at ACCIONA Industrial, noted that it was achieved “with success and the greatest guarantees.” But echoing ENGIE and its consortium partners, he pointed out that the project’s technical achievements were only part of the project. “The principle that governs the entire project is that of sustainability in all areas: economic, social, and environmental. That is why all activities are planned with the rigor and detail that both Kathu Solar Park and the John Taole District Municipality community demand of us,” he said.

One of the project’s priorities was to “bring somewhat of an economic revival to the region, where communities are presently plunged in depression due to the enormous slump in mining activities in the area,” Kathu Solar Park Ltd. noted in a statement. Construction at peak created 1,200 jobs, and about 81 workers run the plant today, it said. SENER, ACCIONA, and Kathu Solar Park also dedicated a global investment in social initiatives, efforts “which have borne fruit over the past three years in the communities surrounding Kathu, improving education levels in the community and boosting small and medium-sized businesses in the region,” the SENER-ACCIONA joint venture said in a statement. “The results of these initiatives include the creation of more than 5,000 direct, indirect and induced jobs during the construction phase of Kathu.”

As laudably, Kathu Solar Park has pledged to share 1% of operating revenues (in the form of dividends) with disadvantaged communities, funds that will go to education, healthcare, and social welfare projects in the John Taolo Gaetsewe district, with the aim to further foster more local and rural progress. As part of the economic commitment, developers also sourced more than 42% from local suppliers.

Operator efforts to continually improve the environment are also notable. “The Kalahari is a vast 360,000 square mile desert but it is far from a wasteland. To those who are familiar with the stark beauty of the landscape it is full-to-bursting with plants and animals wholly adapted to this harsh environment,” Kathu Solar Park noted. One effort, for example, included a “rescue operation” that involved walking over nearly 7 km 2 of the site, searching for plant species that could be carefully removed, preserved in tubs, and relocated to the eastern portion of the site, which ENGIE has designated as a natural preserve in collaboration with the community.

Today, the plant is run by Kathu Operations, selling its power to Eskom under a 20-year power purchase agreement. According to CEO Julian Nair, the new team will continue to prioritize benefits to the local community. “We are turning the potential of this province to create opportunities while growing the economy,” he said. ■