Engineers at Purdue University and Sandia National Laboratories have developed a technique that uses sensors and computational software to constantly monitor forces exerted on wind turbine blades. Their achievement could one day improve the efficiency of wind turbines by providing the blades’ "smart" structure with necessary data to adjust to rapidly changing wind conditions.

"The ultimate goal is to feed information from sensors into an active control system that precisely adjusts components to optimize efficiency," said Purdue doctoral student Jonathan White, who is leading the research with Douglas Adams, a professor of mechanical engineering and director of Purdue’s Center for Systems Integrity. The system also could help improve wind turbine reliability by providing critical real-time information to the control system to prevent catastrophic turbine damage from high winds.

The engineers embedded sensors called uniaxial and triaxial accelerometers inside a wind turbine blade as the blade was being built. Their findings show that using a trio of sensors and "estimator model" software developed by White accurately reveals how much force is being exerted on the blades. Purdue and Sandia have applied for a provisional patent on the technique. The blade is now being tested on a research wind turbine at the U.S. Department of Agriculture’s (USDA’s) Agriculture Research Service laboratory in Bushland, Texas. Personnel from Sandia and the USDA operate the research wind turbines at the Texas site.

Such sensors could be instrumental in future turbine blades that have "control surfaces" and simple flaps like those on an airplane’s wings to change the aerodynamic characteristics of the blades for better control, the researchers said. Because these flaps would be changed in real time to respond to changing winds, constant sensor data would be critical.

"The aim is to operate the generator and the turbine in the most efficient way, but this is difficult because wind speeds fluctuate," Adams said. "You want to be able to control the generator or the pitch of the blades to optimize energy capture by reducing forces on the components in the wind turbine during excessively high winds and increase the loads during low winds. In addition to improving efficiency, this should help improve reliability. The wind turbine towers can be 200 feet tall or more, so it is very expensive to service and repair damaged components."

Sensor data in a smart system might also be used to better control the turbine speed by automatically adjusting the blade pitch while also commanding the generator to take corrective steps, he said. Or, it could be used to design more resilient blades because they are capable of measuring acceleration occurring in various directions, which is necessary to accurately characterize the blade’s bending and twisting and small vibrations near the tip that eventually cause fatigue and possible failure.

The sensors also measure two types of acceleration. One type, dynamic acceleration, results from gusting winds, while the other, called static acceleration, results from gravity and steady background winds. It is essential to accurately measure both forms of acceleration to estimate forces exerted on the blades. Research is ongoing, and the engineers are now pursuing the application of their system to advanced, next-generation turbine blades that are more curved than conventional blades (Figure 5). This more complex shape makes it more challenging to apply the technique. 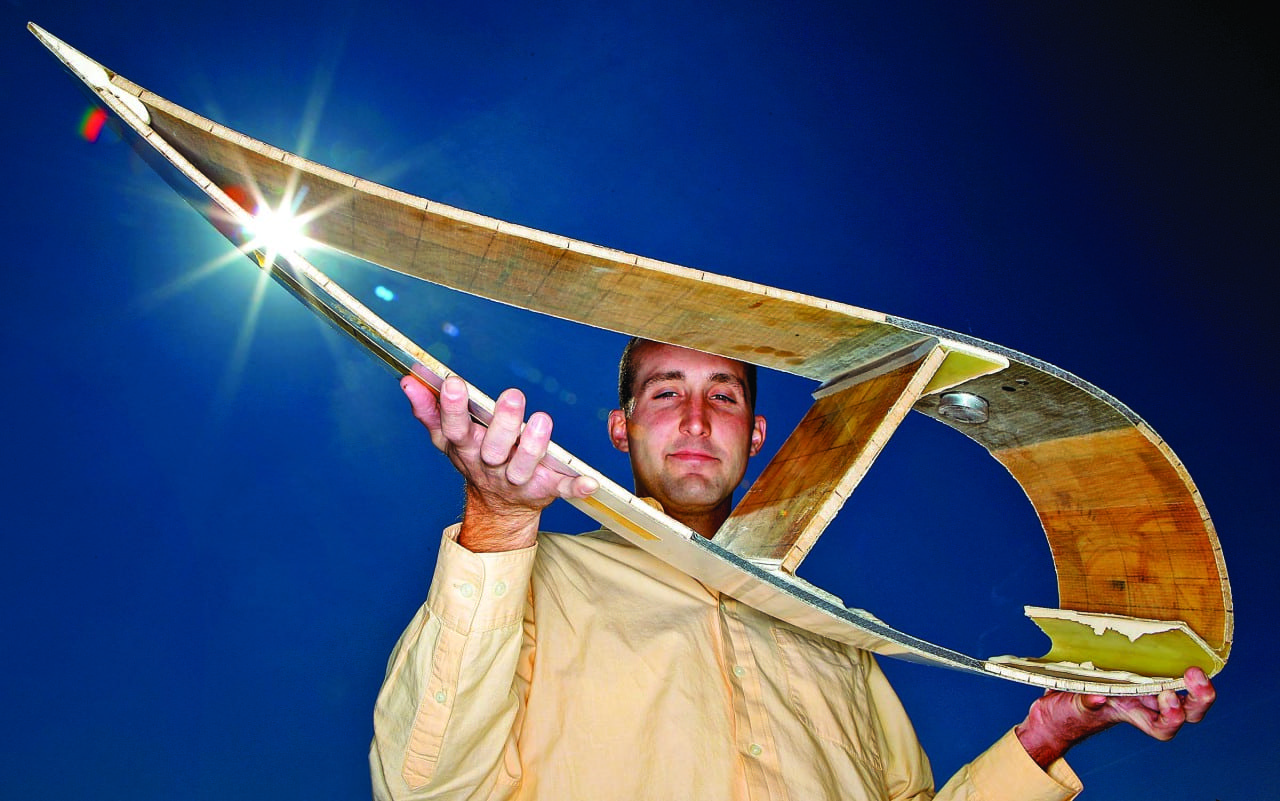 5.     A smart curve. Purdue doctoral student Jonathan White holds a cross section of a wind turbine blade like the one used in research to improve the efficiency of turbines and prevent damage to blades from high winds. An engineering team has developed a technique that uses sensors and computational software to constantly monitor forces exerted on wind turbine blades. Such sensors could be instrumental in future turbine blades that have control surfaces and flaps like those on an airplane’s wings to change the aerodynamic characteristics of the blades for better control. Courtesy: Purdue University/Andrew Hancock