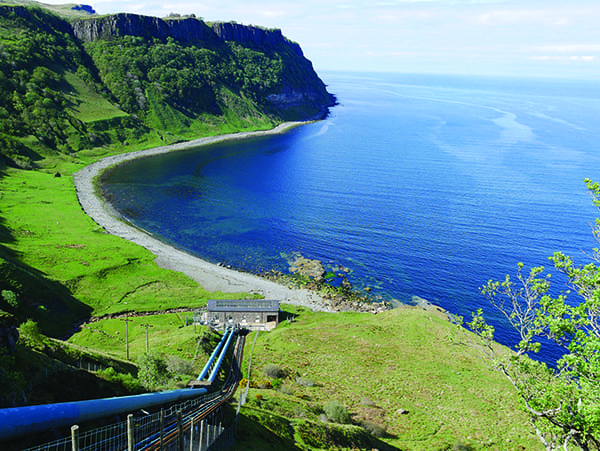 The refurbishment of Storr Lochs, a small hydropower plant built nearly 70 years ago at an isolated location in Scotland’s mountainous Isle of Skye, has given the project new life and purpose.

The reason that the North of Scotland Hydro-Electric Board in 1949 sought permission to build a dam and a power station at Storr Lochs, in a highly remote peninsula on the Isle of Skye, was simple: to improve electric reliability. The facility was built a mere six years after the company—which became Scottish Southern Energy after privatization, and today is known as SSE—was established. As lawmakers at the time argued, development of hydropower projects in the Scottish Highlands would attract industry and transform the lives of the isle’s residents.

Before the 2.4-MW Storr Lochs small hydro plant was commissioned in May 1952, its closest town (today, Skye’s biggest town), Portree, relied on a single diesel generator. The sparse houses in Broadford, a meandering village that lies southeast in the shadow of the undulating Red Cuillin mountains, sourced their power from an underwater cable that ran 10 miles from Kyle of Lochalsh, from a power plant on the Scottish mainland. Considering the project’s complexity, how quickly it was completed is a marvel of its own. 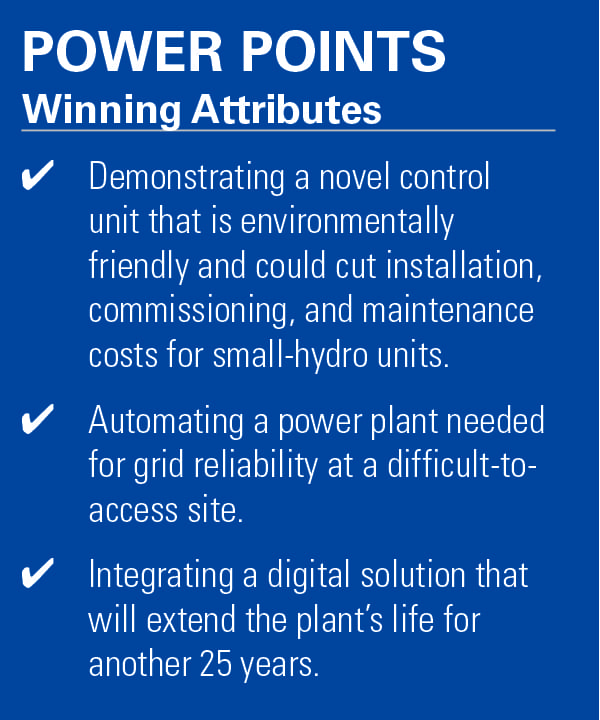 The generating station, today equipped with two Francis turbines, is built at the base of a steep 107-meter (m, 350-foot) cliff on the shores of Bearreraig Bay. To get to the power plant, its developers built a flight of 647 steps—as well as an electrically operated funicular. As SSE explained, the project essentially makes use of a gross head of water of 136 m (446 feet), which cascades over sharp cliffs, from Storr Lochs, a reservoir on the eastern coast of the Trotternish peninsula, and which combines waters from the nearby Lochs Fada and Leathan (Figure 1).

For decades, the facility produced an average of 8 GWh per year, making it an integral part of the national electricity supply network. More recently, however, SSE determined that the 70-year-old original plant equipment did not meet current standards, and owing to its remote location, it was becoming difficult and expensive to maintain. One issue it faced was that it lacked automation, which meant that start and stop, or load changes, had to be made manually. The balance-of-plant systems were also becoming unreliable with limited alarm monitoring in place. Because new technology was widely available on the market that could solve these problems, SSE moved to overhaul and completely modernize the plant.

As part of the upgrade, which was completed at the end of 2017, the plant received two new turbines, provided by global technology firm Voith Group. Notably, as Voith told POWER, each turbine is equipped with a novel control unit that regulates water flow by automatically adjusting the guide vanes (Figure 2). The technology is enabled by a self-contained autonomous compact drive that requires no oil pipe-works in the powerhouse or an additional accumulator, and it works with a very low volume of hydraulic fluid.

Voith said it developed the technology based on its tried-and-tested servo-hydraulic linear drive closed loop differential pump (CLDP), which its subsidiary Voith Turbo has offered for some years now in a wide range of plants in sectors such as the food industry, test rigs, and laboratory machines. It has never been used at a small hydropower facility, it said.

For use at Storr Lochs, Voith adapted the CLDP to SSE’s requirements. It was a smooth undertaking, “thanks to the extensive flexibility of the CLDP,” it said. “This development based on a proven design is especially compact and can be easily installed and serviced,” Voith noted. “In addition, the hydraulic regulation is environmentally friendly and energy efficient.”

While the self-contained technology is ideal for the remote site, it also fulfills SSE’s desire to reduce costs “because it allows almost all pre-commissioning to be done and witnessed in the workshop environment thus avoiding a complex task being done on the construction site,” the company explained. Because it requires a low volume of hydraulic fluid, it ensures “particularly safe operation without fluid losses.” That also means “that the regular checks and inspections necessary in conventional systems can be dispensed with.” And because it was pre-assembled at the turbine manufacturer’s facility—already filled with oil and pre-charged with nitrogen, requiring only electrical connections—installation and commissioning efforts were “kept to a minimum.” It has also offered “enormous cost savings in conjunction with service,” Voith said. The system has been functioning at maximum reliability since the end of 2017, it confirmed.

Along with the new turbines, SSE’s refurbishment project also included a full upgrade and replacement of the low-voltage distribution, protection, and control equipment, efforts that have provided the plant with a “modern robust platform to support the station’s operation into the foreseeable future.” The plant was essentially equipped with an automated station control, based on reservoir level; visual indication from a human-machine interface; improved alarm, event monitoring, and data logging; and remote links to SSE’s central control room in Perth—200 miles away.

UK-based automation firm Servelec Controls undertook all of the design, installation, and commissioning for all panels, cabling, and software required to upgrade the systems. The units require identical control, power, protection, main inlet valve, and automatic voltage regulator panels. Each unit has its own programmable logic controller (PLC), and a third PLC controls the station ancillary services, Servelec noted. “Further panels operate these ancillary services, which include the station battery system, remote telemetry, building ventilation and extraction, winch house, station service change-over, and communications connections between the station, winch house and valve house. Servelec then supplied all spares, cabling, junction boxes and software to complete the installation,” it said. The various hardware and software from a variety of different manufacturers—including Allen Bradley, Rockwell, SEL, and Voith—is integrated into a single architecture.

The new control system now provides a reliable, fully automated and user-friendly system to support Storr Lochs’ operations for the next 25 years, Servelec said. “Designed to standards consistent with other facility upgrade projects across the SSE fleet, it will provide improved control, a commonality of spares and reduce the amount of operator training required.” ■