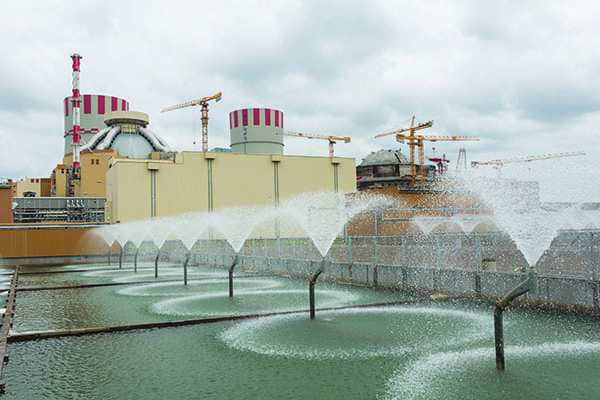 Rosenergoatom regards its Novovoronezh Nuclear Power Plant (NPP) as a living history of nuclear power, featuring six units (with more under construction) each an improvement over the last. The plant has been the first facility to launch and operate all new VVER unit types for the last 50 years. “The Novovoronezh NPP is a kind of an open-air museum which allows tracing the whole life cycle of VVER reactors including, operation, modernization, life extension, and decommissioning,” a spokesperson for Rosenergoatom told POWER.

The plant is home to the first VVER-440 reactors to have their operational life extended via an annealing of the reactor vessel. The plant’s VVER-1000 reactor was modernized and upgraded to meet post-Fukushima safety requirements, while decommissioning of Units 1, 2, and 3 is currently underway. “Novovoronezh NPP is a genuine training center for the world nuclear industry,” Rosenergoatom said (Figure 1).

With the completion of Unit 6, Novovoronezh has continued its legacy of innovation. The latest operational iteration of Russia’s VVER technology entered into commercial operation on February 27, 2017. The unit—also referred to as Unit 1 of Novovoronezh NPP-2—is seen by Rosenergoatom as a significant step up from its predecessors.

“The new VVER-1200 power unit is based on the latest advancements and developments which all comply with all post-Fukushima safety requirements (this is why the unit is considered to be Generation III+ advanced reactor). At present this is the most powerful nuclear power unit in Russia which enjoys three key advantages: high productivity, durability, and safety,” according to Rosenergoatom. 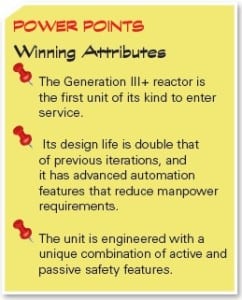 Novovoronezh NPP-2 is the first nuclear power plant of the new generation AES-2006 design with VVER-1200 reactors. “The AES-2006 design is the standardized nuclear power plant design that embodied the latest achievements of the Russian engineering. It is based on technical solutions of the AES-92 design,” according to Atomenergoproekt, the general design and construction contractor for Novovoronezh NPP-2.

In addition to increased capacity, the unit also improves the operational efficiency of earlier generations. The number of personnel has been decreased by 30% to 40% (on a per MW basis) due to automation, and the centralization of functions and processes, Rosenergoatom reported.

Further, the design life of the main equipment has been doubled, from 30 to 60 years, and other innovative design aspects have been employed to cut costs. “For example, the project [employs] only one cooling tower instead of two,” Rosenergoatom said.

Unit 6 is the first of the VVER-1200 generation of reactor to be completed. “The experience of the construction and commissioning of the unique VVER-1200 power unit at the Novovoronezh NPP has demonstrated that Rosatom State corporation and Rosenergoatom Concern have once again implemented an innovative, unique power unit project which shapes to the full extent the agenda of the development of the nuclear industry of tomorrow,” touted Rosenergoatom.

Three additional units equipped with VVER-1200 serial reactors are being constructed in Russia. Unit 7 of the Novovorenezh NPP and two units at the Leningrad NPP are expected to reach commercial operation before 2020.

One of the most important aspects of the plant is its “unique combination of active and passive safety systems, which make the power plant more resistant to external and internal impacts,” Rosenergoartom explained.

For example, Rosenergoatom said that the unit is the first in Russia to deploy an innovative new passive heat removal system. The system ensures enduring heat removal from the core of the reactor in the absence of any electrical power supplies and operates with no external operator action under any natural conditions.

In addition, a melt localization device, called the “trap,” is installed at the bottom of the containment building of the plant. “This device is used for localization and cooling of the melt of active zone allows excluding any possibility of the release of radioactive products into the environment even in the case of hypothetical critical accident,” according to Rosenergoatom.

Rosatom, Russia’s state atomic energy corporation, said in a 2016 brochure, “The safety philosophy embodied in the VVER-1200 (AES-2006) is unique among reactors on the market in deploying a full range of both active and passive systems to provide fundamental safety functions. Its safety systems can thus handle complicated situations that go beyond the traditional design basis accidents.”

Three fundamental safety functions have been built into the VVER-1200 design: control of reactivity, removal of decay heat to the ultimate heat sink, and containment of radioactive materials.

To help control reactivity, all VVER-1200 reactors are designed with a unique safety feature, the brochure explains. “If the control rods are inserted into the core the reactor will stay in shutdown state even at low temperature over the long term. This means that reactor can be cooled down to safe shutdown condition without any concern that it might become critical again and without a mandatory requirement to inject boron into the reactor coolant system,” according to Rosatom.

The brochure explains that decay heat can be removed from the VVER-1200 in three ways:

■ By active systems to atmosphere (feed and bleed from steam generators)

■ By passive systems to atmosphere

The VVER-1200 is also equipped to handle a number of external threats such as seismic hazards, a small airplane crash, hurricanes and tornados, significant snow and ice accumulation, and external explosions.

Rosenergoatom hopes that the successful operation of the VVER-1200 at Novovoronezh Unit 6 will open the door for increased export of the technology. “VVER power units make up the Rosatom’s export offer to build safe and environmentally friendly nuclear power plants in countries ready to develop their economies and to comply with international requirements in the field of environmental safety and zero-emission energy policy,” the Rosenergoatom representative told POWER. ■