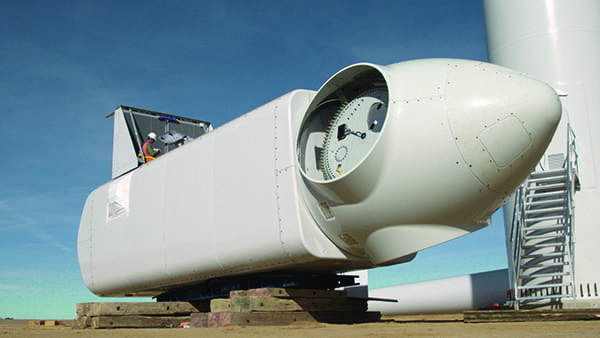 The first wind farm in the U.S. came online in late 1980, at Crotched Mountain in southern New Hampshire. The farm was developed by U.S. Windpower, a group that included graduates of the wind energy program at the University of Massachusetts. That first foray into wind generation included 20 turbines, rated at 30 kW each, putting Crotched Mountain’s output at 600 kW, or 0.6 MW.

A lot has changed in 40 years. Wind power today provides more than 20% of the nation’s renewable energy, far outpacing solar power, and in some areas—most notably Texas, which leads the U.S. in wind generation—wind provides more electricity than coal-fired generation. Utilities in many areas have made wind power a key component of their generation portfolios as they work to meet state and federal targets for renewable energy production.

Colorado, like Texas, is another state with abundant energy resources. It provides oil, natural gas, and coal, and its geography is well-suited to solar arrays and wind farms. The U.S. Energy Information Administration reports that renewable energy accounts for about one-quarter of Colorado’s electricity production, and of that, wind power accounts for about 75% of renewable power output. 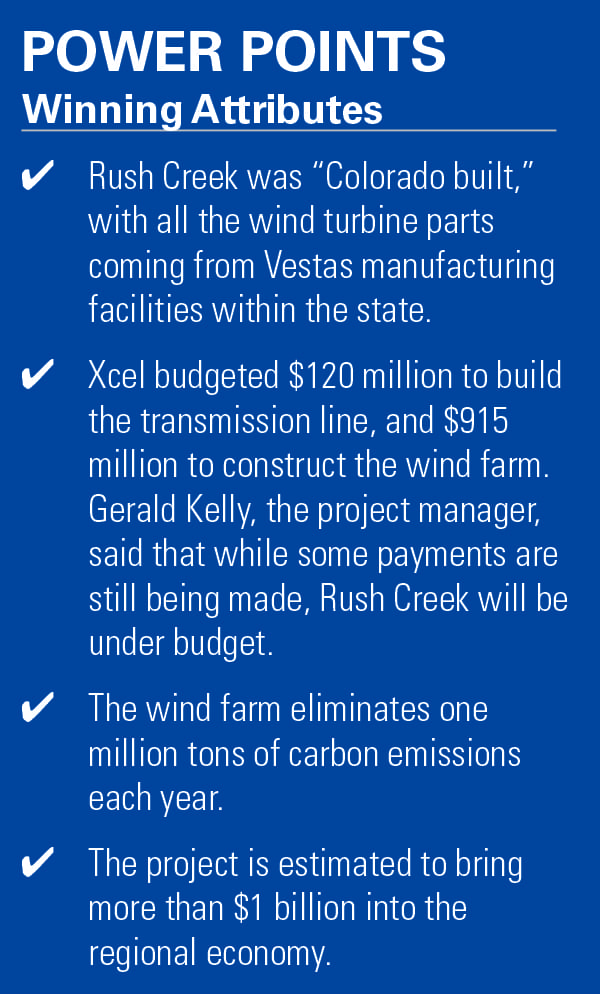 Xcel Energy is Colorado’s largest utility, and it is taking advantage of wind’s potential. Xcel’s Rush Creek Wind Project, which came online in December 2018, added 600 MW of generation capacity to the state’s portfolio, increasing the state’s wind generation by about 20%. Rush Creek is a $1 billion project critical to Xcel’s “Colorado Energy Plan,” a strategy approved by the state’s Public Utilities Commission last year that has a goal of 55% renewable energy on Xcel’s grid by 2026, while reducing carbon emissions by about 60% from 2005 levels.

Xcel submitted a planning application for construction of Rush Creek to the Colorado Public Utilities Commission in May 2016 and received approval in September 2016. Construction began in March 2017.

Gerald Kelly, Xcel’s project manager at Rush Creek—Kelly spoke with POWER from the utility’s new Cheyenne Ridge wind farm, another large-scale project under construction in eastern Colorado—said, “Myself and many of the people on the Rush Creek team worked together on other projects for Xcel in the eight years or so before [Rush Creek] started. We worked on the Comanche coal plant,” on a project that added a third coal-fired unit to the plant in 2010, and “we built the Cherokee plant,” a new gas-fired combined cycle plant that came online in 2015.

“We had the [project development] expertise and we demonstrated this expertise on the [Rush Creek] project,” Kelly said.

Kelly said the turbines’ components were all manufactured and assembled in Colorado. The tower sections, in three pieces, were fabricated at a Vestas plant in Pueblo. Other parts were manufactured by Vestas at facilities in Brighton and Windsor. Kelly said Vestas delivered all the turbines to the Rush Creek sites by truck.

The wind farm’s two sites are near the towns of Limon and Hugo. Construction took place simultaneously at both locations. There are 190 wind turbines at a site south of Limon, and 110 turbines are sited northeast of Hugo.

Foundation work for the project’s wind turbines began in May 2017. Each turbine foundation requires about 300 yards of concrete, reinforced with steel. Once the foundations were in place, turbines were installed. That work included setting three tower sections for each turbine, attaching a hub to a nacelle (shown in the photo at the beginning of this article) that houses all the generating components, and then setting the nacelle on top of the tower and attaching the blades (Figure 2).

Each turbine blade is about 180 feet (54 meters) long; each turbine hub is about 260 feet tall. Cable from the wind turbines to the substations is buried.

An Xcel fact sheet breaks down the project by the numbers:

Kelly said Invenergy was the original developer of the project. “Pre-construction, Invenergy was the site developer,” Kelly said. “We approached them in early 2016. They had been developing the two sites for years, looking at the wind data, to determine the capacity factor for the project. In March 2017, they sold the project to us, providing all the paperwork, leases, bird studies, [and] environmental studies.”

Vaisala, an environmental consultancy, provided due diligence reports for Xcel, which included detailed analysis of meteorological observations at the project sites, weather simulation, expected energy production, and uncertainties surrounding generation predictions for the project. “Vaisala worked fast,” said Kelly, allowing Xcel to keep to its project schedule. “They were flexible and met our deadline. This allowed us to continue with our plans.”

Mortensen was the main contractor for the project. “It was a three-legged stool,” Kelly said. “Mortensen, Xcel, Vestas.” Mortensen said Rush Creek was the single-largest wind contract it had executed. The company’s work at the two sites included building access roads, foundations, the collection system installation, operations and maintenance building, and erection and wiring of the 300 turbines. Other companies with roles in the project included PAR Electric, Hooper Corp., Great Southwestern Construction, and Redeker Excavating.

Kelly said the sites began producing power in August 2018, when the final section of the transmission line was energized, “and we finished our generator interconnections on Dec. 7, 2018.”

“We spent a lot of time meeting with all the contractors on safety issues,” Kelly said. “At the end of every day, we talked about what we had seen that day. If we had any concerns, that data was communicated to workers each morning.” Kelly said anywhere from 100 to 300 workers were at the sites each workday.

Kelly said “there are three or four full-time Xcel employees” who now work at the wind farm. “We have hired Vestas under a 10-year service and maintenance contract, and there are about 30 Vestas employees that are out there.”

Mortensen estimated that the project could “potentially generate $180 million in landowner lease payments and property tax revenue.” The Leeds School of Business at the University of Colorado said Rush Creek ultimately is expected to create more than 7,000 jobs in Colorado, based on a 25-year analysis.

Kelly noted the economic impact of the project beyond the power it provides to Xcel’s customers. “The landowners get royalty payments,” he said, referring to those on whose land Rush Creek resides. “Depending on the power that’s produced for the next 25 years, all the landowners get a cut of that. And of course, the counties get their [tax revenue].”