Solar panel prices have taken a 10% tumble since October last year, and they are expected to drop another 15% to 20% this year, owning to an oversupply from the mass of new factories and draining demand in Germany and Spain, where solar incentives were recently cut. In the U.S., the low prices — pushed even lower by the renewed solar tax credits that took effect on Jan. 1 and other incentives — have heightened demand, both on the distributed generation level and at utility scale.

In late January, the California Public Utilities Commission (CPUC) said that Californians — who account for nearly 70% of the U.S. solar market — installed twice as many megawatts of solar power than the year before. A Staff Progress Report on the California Solar Initiative, the ratepayer-funded program that provides incentives for solar system installations, shows that homeowners, businesses, and local governments in California’s investor-owned utility (IOU) territories installed 158 MW of distributed solar photovoltaics (PV) in 2008. That figure is double the 78 MW installed in IOU territories in 2007. The state now boasts a cumulative total of 441 MW of distributed solar PV systems. And the trend is expected to strengthen in 2009: The CPUC reports that the program has received applications for roughly 322 MW of grid-tied, distributed solar PV projects.

Only a month before the release of that report, California’s largest utility, Southern California Edison (SCE), unveiled the first of its proposed 150 solar photovoltaic installations on Southern California commercial rooftops — and announced the location of the second. Capital costs for the entire project are estimated at $875 million. At the first installation, on a 600,000-square-foot distribution warehouse in Fontana, Calif., SCE fitted 33,700 advanced thin-film solar panels, making it the largest single rooftop solar PV array in California (Figure 4). 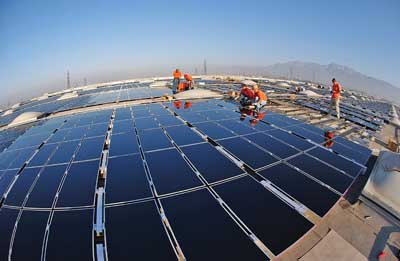 4.    Raising the roof. Southern California Edison (SCE) in December last year completed the installation of 33,700 thin-film solar photovoltaic panels on the 600,000-square-foot rooftop of a Fontana, Calif., warehouse. The panels will feed electricity back into the grid. This is the first of approximately 150 commercial rooftops that eventually will make up SCE’s 2-square-mile solar generation project—the largest solar panel installation in the world. Courtesy: SCE

The second solar installation will soon begin atop a 458,000-square-foot industrial building in Chino, Calif., SCE said. The entire rooftop solar project, dubbed the "Solar Power Game Changer," could eventually cover 2 square miles of existing commercial roofs with 250 MW of peak generating capacity. The utility said it was prompted by advances in solar technology that reduce the cost of installed PV generation to approximately half that of current similar installations. Additionally, the utility said it hopes to fill a gap it has observed in current rooftop solar projects in the state.

But it hasn’t been all smooth sailing for SCE. The utility wants consumers to pick up the cost of the rooftop solar installations, and the CPUC only granted SCE permission to proceed with the first three installations in September 2008 — four months behind schedule; it will issue its decision on the entire project in March 2009. The CPUC’s approval of the first three projects has piqued the interest of Pacific Gas & Electric, whose CEO, Peter Darbee, according to CNET News, in January reportedly said at a CleanTech conference that the company would also soon invest in a large-scale solar rooftop project.

PG&E has typically purchased power from young start-up companies, such as Ausra and OptiSolar; the latter has been planning a 550-MW solar PV plant (TopazSolar Farms) in San Luis Obispo County, Calif. Earlier in January, however, both companies said they were hard hit by the recession. OptiSolar said it would lay off almost half of its staff, and the company has delayed construction of some projects. Ausra said it would cut 10% of its staff (12 people) and is refocusing on using its technology for steam generation and smaller plants in the near term.

Meanwhile, the proposer of a $50 million rooftop solar program in North Carolina, Duke Energy Carolinas, is battling that state’s regulators, telling them it cannot build the 10-MW project unless they remove restrictions on how the utility will recover costs from customers. At the end of 2008, the commission approved the solar program but set limits on how much of the program’s costs Duke would be able to recover under legislation adopted in North Carolina in 2007. Duke said that the restrictions could cause the company to violate federal tax credit accounting standards, and this posed a dilemma: If Duke violated federal rules, it would forfeit investment tax credits of up to $250 million, including $125 million for the company’s 825-MW Cliffside coal-fired power plant. But if it did not proceed with the rooftop program, it could not meet new state requirements for solar energy production in 2010.