The motor, rated at 49,000 horsepower, was tested for a large U.S. Navy combatant ship at the Navy’s integrated power system land-based test site in Philadelphia. Incorporating coils of HTS wire that are able to carry 150 times the current of similar-sized copper wire makes the motor less than half the size of conventional motors used on the first two DDG-1000 hulls and will reduce ship weight by nearly 200 metric tons (Figure 5). This will make new ships more fuel-efficient — saving close to $1 million annually, depending of the cost of oil — and free up space for additional war-fighting capability, AMSC said. 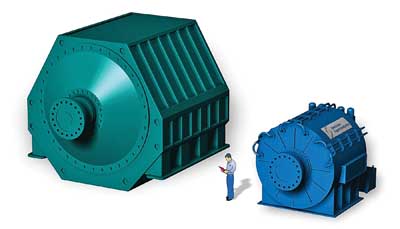 5.    Sweating the small stuff. A 36.5-MW ship propulsion motor that uses high-temperature superconductor (HTS) technology has been successfully tested for a large U.S. Navy combatant vessels by American Superconductor Corp. and Northrop Grumman Corp. at the Navy’s integrated power system land-based test site in Philadelphia. The HTS wire in the motor is able to carry 150 times the power of similar-sized copper wire, making this motor less than half the size of conventional motors. The test’s success raises the possibility of integrating HTS rotating machine technology in several other uses, including wind generator systems—particularly those for offshore farms. Courtesy: American Superconductor Corp.

The HTS rotating machine system was designed and built under a contract from the Office of Naval Research to demonstrate the value of HTS motors as the primary propulsion technology for future Navy all-electric ships and submarines. (See POWER, Jan./Feb. 2005, "Roadmap for the All-Electric Warship.") AMSC and Northrop Grumman shared the work under a formal business agreement, with AMSC serving as the prime contractor for the research and development phase.

Earlier in 2008, the Navy successfully installed another HTS system — an HTS degaussing coil — onboard the USS Higgins (DDG 76). Powered by AMSC’s HTS wire and magnet cable technology, the coil system will undergo sea trials over the next two years onboard the Higgins. As with the motor technology, degaussing coils utilizing HTS wire will significantly reduce system weight for DDG 1000-class ships, landing platform dock ships, and for the Littoral Combat Ships.

"The successful load test of our HTS motor marks the beginning of a new era in ship propulsion technology," said Dan McGahn, senior vice president and general manager of AMSC Superconductors. "This motor provides the U.S. Navy with a truly transformational capability relative to size, stealth, endurance and survivability, providing our Navy with a clear performance advantage for years to come."

The Navy has invested more than $100 million in the development of HTS technology. HTS technology could also be used in commercial vessels such as cruise liners, and liquefied natural gas tankers.

Meanwhile, HTS rotating machine technology is also being applied to the renewable energy industry. Wind generator systems utilizing HTS wire instead of copper wire are expected to be much smaller, lighter, and more efficient than current systems. "This will lower the cost of wind-generated electricity — particularly for offshore wind farms," according to AMSC, which is analyzing the economics of HTS wind generators.

HTS technology is also currently being demonstrated in power cables belonging to the Long Island Power Authority’s grid network. The project is the first installation of a superconductor cable in a live grid and at transmission voltages (see POWER, Feb. 2009, "HTS Cables Speed Up the Electric Superhighway"). The 2,000-foot-long, cryogenically cooled 138,000-V cable system used in the project conducts up to five times more power than traditional copper-based cables with virtually no electrical losses. Development of commercially viable underground HTS transmission cable could potentially lead to the creation of an efficient "electricity superhighway," much like the advent of fiber optic cable has aided development of the "information highway," says the Energy Department’s Office of Electricity Delivery and Energy Reliability.