If measures aren’t taken immediately to replenish the rapidly shrinking Dead Sea, the very salty body of water in the Middle East will shrivel up within 50 years — and that could pose an environmental calamity, experts have warned. Of the most seriously discussed solutions proposed to remedy this dilemma is an ambitious project that would involve the construction of a 110-mile-long canal to pump about 2.5 billion cubic yards of water annually from Aqaba on the Red Sea to a desalination unit near the Dead Sea. Half that water would be desalinated, supplying the main urban centers in Jordan, Israel, and the Palestinian Authority, while the rest would be channeled into the Dead Sea, raising the water levels from 446 yards below sea level to 344 yards below sea level.

The idea has frequently been revisited, mainly because the Red Sea waters would have to plunge 437 yards to meet the Dead Sea — making it ideal for hydropower projects (Figure 6). The prospects of a new source of freshwater (via a desalination unit that would use the process of hydrostatically supported reverse osmosis and run with electricity produced by proposed hydropower facilities) are also attractive — particularly because the Dead Sea’s slow demise has been attributed to diversion of water from the Jordan River for agricultural and industrial uses. 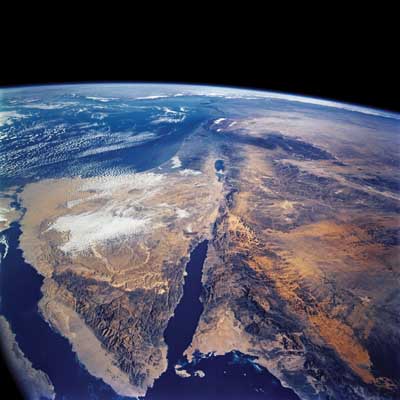 6.    Of biblical proportions. In an effort to save the rapidly shrinking Dead Sea, the World Bank is studying how feasible and environmentally sound a proposal to build a 110-mile canal from Aqaba on the Red Sea to the Dead Sea would be. Because water from the Red Sea would plunge 437 yards to the Dead Sea, the project—dubbed “Red to Dead”—is being hailed as a potential hydropower bonanza. It could also potentially energize a desalination plant to the benefit of adjacent nations. This image of the Sinai Peninsula and the Dead Sea Rift was taken by astronauts on board the Space Shuttle Columbia in 2002. Source: NASA

The magnitude of the conveyance concept is not unprecedented: Similar projects (like the San Francisco River Water Transfer in Brazil, the Central Arizona Project, and the Wanjiazhai Water Transfer Project in China) exist.

But among the so-called "Red to Dead" project’s setbacks — beside the obvious environmental challenges that involve changes to the Dead Sea’s unique mineral composition — is its price tag of about $4.3 billion. The two-part feasibility study and environmental and social assessment alone would cost about $15.5 million. Until some resolution could be reached on funding and terms of reference could be established for the project, it had been on hiatus since 2001, when the first tender was floated.

This January, however, the World Bank announced that Sweden and South Korea had contributed the last of the funds needed to launch the feasibility study, and that British specialist firm Environmental Resources Management would conduct it. At the same time, the government of Jordan said it was considering embarking on the Red to Dead canal, even before the World Bank – sponsored study would be completed by 2010, to address the chronic water deficit in the kingdom. Nevertheless, the consensus is that completion of the project is in the far-distant future. Even the next step — which requires that a final decision on the feasibility study be signed by Jordanian, Israeli, and Palestinian leaders — will take some time.