New wireless technologies for power plant instrumentation offer significant cost savings when compared to traditional wired networks. The value of this cost savings is especially relevant in the highly competitive power industry, where aging facilities are common and upgrades are an expensive necessity. Modern wireless networks offer a reliable upgrade path that even provides some unexpected benefits when compared to traditional copper networks.

Industrial wireless networks have matured since the early days of point-to-point systems. The WirelessHART (highway addressable remote transducer) protocol has emerged as the de facto standard for wireless communication in a plant environment. This digital protocol allows operators to benefit from all the control and diagnostic features currently available to wired HART transmitters. Because it is an open standard, early adopters need not worry about being locked in to a single supplier by a proprietary communications protocol. This means that wireless devices from a variety of manufacturers can happily coexist on the same network, provided each manufacturer has conformed to the WirelessHART standard.

In WirelessHART self-organizing networks, each device needs only to maintain radio line-of-sight to one other device on the network and does not need to have direct line-of-sight to the gateway (Figure 3). Because each device is typically in communication with several of its peers, it will have redundant transmission paths available to it. If an obstruction blocks one transmission path, the blocked device will automatically revert to a redundant link to pass traffic to the next-nearest neighbor. That neighbor then forwards this traffic on to the gateway. 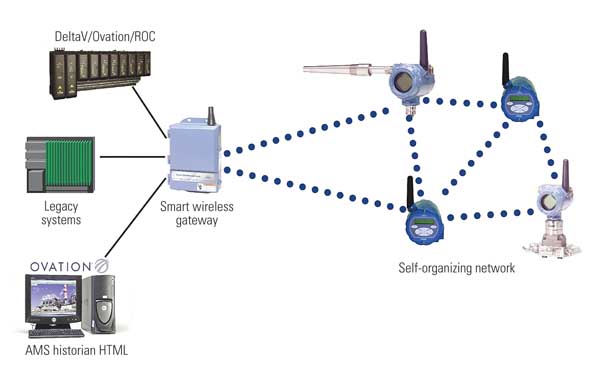 3. Disciplined organization. WirelessHART field networks utilize a self-organizing topology in which each device serves as a router for the traffic of other devices within radio range. This enables a self-organizing network to be far more reliable and fault-tolerant than older point-to-point systems. Source: Emerson Process Management

Perhaps the most attractive attribute of a wireless network is that installation cost is significantly reduced when compared with that of an equivalent wired system. A significant portion of the cost of a measurement loop is for the cable, conduit, and multiplexing hardware required to connect the sensor to the plant’s distributed control system (DCS). A wireless network requires none of these infrastructure improvements, and the resulting savings are significant.

For example, engineers at a Midwestern power plant sought additional temperature data for a feedwater heating system. Discouraged by the cost of installing traditional 4-20 mA wired sensors, engineers looked to a wireless alternative. A wireless self-organizing topology network offered reliability similar to that of a wired system, but at an estimated savings of 60%.

Consider also the case of pH control in a closed cooling system. Scaling of piping and tower fill material by calcium carbonate is a significant problem. It is desirable to convert relatively insoluble calcium carbonate to soluble bicarbonate by lowering the cooling water pH, typically by treating it with sulfuric acid. However, depressing pH too far may lead to corrosion of steel surfaces. It is often beneficial to measure pH at several points in the tower basin to ensure accuracy, and wireless transmitters allow these auxiliary measurements to be installed at a fraction of the cost of a wired setup.

A self-organizing network becomes more robust as it grows. It is usually not necessary to conduct an additional site survey when adding new measurement loops. The new devices automatically form links among themselves and with the existing network without requiring any manual reconfiguration. The new radio links strengthen the network by providing redundant paths for network traffic.

Most expansions will not require new infrastructure, because the number of client devices that a gateway or access point can serve is quite large. Most gateways accommodate between 50 and 100 client devices, depending on the desired measurement frequency.

An example of a process that benefits from redundant instrumentation is flue gas desulfurization in a coal-fired power plant. Wet limestone scrubbers are the most common method of removing sulfur from the flue gas because reagent costs are low and the final product is salable gypsum. The scrubber passes flue gas containing sulfur dioxide through a spray of calcium carbonate slurry. As limestone reacts with dissolved sulfur to form calcium sulfate, the pH of the slurry drops, signaling the need for more limestone. If the scrubber is allowed to operate at a low pH, unreacted sulfur may escape the system and calcium sulfate deposits will form hard scale on nozzles and demisters. Conversely, feeding excessive limestone wastes reagent and elevates pH, causing calcium sulfite to precipitate. Calcium sulfite forms soft deposits that require an acid wash for removal.

Plant operators must strike a delicate balance between numerous process parameters, carefully coordinating limestone feed rate with plant load in order to keep the desulfurization system operating at maximum efficiency and extend the time between planned shutdowns. The ideal pH and temperature are difficult to calculate theoretically, and target values must be determined by experience.

PH measurements taken in recirculation lines and oxygenation tanks provide an indication of the performance of the desulfurization system. The process environment is quite harsh due to the high temperature of the slurry and the scouring action of suspended limestone particles. Even the most durable pH sensors have a limited service life in such an environment, so redundancy is important. Wireless transmitters reduce the incremental cost of installing new measurement loops, making it feasible to employ a redundant suite of process analytical measurements.

A wireless field network employing the open-standard WirelessHART protocol enables two-way digital communication of diagnostic and configuration information between analyzers and the plant control room. The benefits are similar to those provided by wired devices using the familiar HART protocol. Device status and health are continually transmitted along with process variables to the DCS. This means that fewer manual checks need to be conducted and preventative maintenance may often be performed less frequently. Plant operators may retain tight process control while minimizing overtime and staff training requirements.

The wireless network itself requires minimal maintenance. Today’s advanced transmitters utilize Time Synchronized Mesh Protocol (TSMP) to carefully control the timing of each transmission. This enables each transmitter to keep its radio and processor powered down until it is time to send or receive a transmission. Battery life will vary according to the application, but it is typically several years.

The result is increased efficiency and reduced workload for technical staff. For example, the Environmental Protection Agency requires that most plants monitor the pH of final effluent streams and typically mandates that grab samples be taken at least weekly for laboratory analysis. The pH of the effluent must be controlled between 6 and 9, typically by caustic treatment in surge tanks or settling ponds prior to final discharge to surface water bodies. An online pH sensor with wireless transmitters can provide feedback on the efficacy of the treatment program without the expense of running cables or the additional workload of collecting grab samples. The transmitter may be set to take measurements only when required to maintain regulatory compliance, which greatly extends battery life. This is especially beneficial to coal-fired plants, as rainwater leachate from exposed coal piles can be quite acidic.

Under Lock and Key

Security is a significant concern in any network, and wireless networks present unique challenges. Because wireless transmissions can travel for a considerable distance, it is important that the network be adequately secured against monitoring and intrusion.

The WirelessHART standard mandates that networks employ a multilayered approach to network security. Both transmitter and receiver must authenticate with the network control system. Transmissions are encrypted using a 128-bit NIST-certified algorithm and are verified for completeness and accuracy upon reception. Keys are managed by the gateway and rotated automatically. This combination of authentication, encryption, verification, and key management makes a wireless network at least as secure as a wired system.

Interference from other wireless devices or from unshielded equipment and motors is not typically a concern for a modern field network. Industrial networks in the United States are confined to operate in the 2.4 GHz industrial band. The IEEE 802.15.4 protocol specified by WirelessHART utilizes automatic channel selection and direct sequence spread spectrum (DSSS) coding to resist interference. The network controller continually monitors all 16 available radio channels and rejects any that are too noisy. Network traffic is then distributed among the remaining channels. Transmissions are spread across a band of frequencies surrounding the channel center frequency by the DSSS algorithm. Interference present in one portion of the band does not interrupt transmissions elsewhere in the band, and the network continues to function. All of these functions are automatically handled by the network control system without requiring any manual configuration by operators.

The possible applications for a wireless network go beyond process measurement. Most power plants will find use for two wireless networks running simultaneously. The field network discussed above consists of self-organizing process measurement instruments such as temperature, pressure, and pH transmitters utilizing 802.15.4 radios. The plant network however, utilizes familiar 802.11 Wi-Fi or 802.5 WiMAX. These higher-bandwidth protocols do not enjoy the reliability benefits of a mesh topology, but their enhanced data throughput allows for interesting applications.

For example, state transmitters installed on safety showers or eyewash stations can sound an alarm in the control room upon activation. Operators can then dispatch emergency personnel before even receiving a distress call. The wireless network can also support a personnel locator service that reads radio frequency tags embedded in plant workers’ identification badges and reports their positions to the plant control room. This provides control room staff with increased situational awareness and may help them avoid potentially dangerous situations.

A wireless plant network can also support voice communications over mobile devices similar to cell phones. Such a device can even be used to call up documents such as work orders and wiring diagrams. Plant security and work monitoring may be further enhanced via a surveillance system utilizing wireless cameras.

An example is the experience of Lower Colorado River Authority engineers at the Sim Gideon power plant in Texas, as reported in the March 2008 issue of POWER. Faced with the requirement for a new public address system, engineers calculated that it was 40% less expensive to establish a wireless network than to install a conventional wired one. Once the public address system was up and running, plant engineers were able to expand the network to include a personnel locator service without adding new gateways or other infrastructure.

Wireless instruments are changing the scope of what is possible in process analytical measurement. Their low cost and ease of implementation make it practical to measure points that are prohibitively expensive to wire. The improvements in process awareness and redundant measurement allow plant operators to tighten process control, increase performance, and extend the time between maintenance shutdowns. New advanced wireless systems provide comprehensive solutions for implementing a modern self-organizing network.