Ever since Prometheus stole fire from Zeus and gave it to the mortals on Earth, man has had a love-hate relationship with combustion. Fire can be used for light, heat, and cooking, and it is essential to most electricity generation. But fire also can be very destructive. Arson alone destroys more than 100,000 buildings each year at a total cost of more than $1.5 billion, and the toll from accidental fires is much greater.

For power engineers and technicians, close control of fire—whether in the firebox of a Powder River Basin coal-burning boiler or at high pressure in a gas turbine combustor—is central to efficient plant operations. However, the accidental fires that occur outside of these combustion compartments are what keep safety supervisors awake at night.

The philosophy of FM Global— the world’s leading provider of property and business insurance to industries including power generation and utility companies—is that most losses from fire are preventable. Accordingly, the company and its engineering and research experts spend a lot of time solving very challenging property-loss-prevention problems. An example is preventing fires caused by flowing lubricating oil, either as a spray or a spill.

According to FM Global’s Power Generation Industry leader, Terry Cooper, the average cost per square foot of an open floor power generation plant is a whopping $2,200. Given the high price of their “real estate,” it behooves power engineers and technicians to understand the fire hazards present in their plants and to have access to solutions designed to cope with those hazards.

In the summer of 2004, FM Global conducted a series of large-scale tests to examine how effective various sprinkler configurations are at mitigating hazards found in the turbine halls of power plants without operating floors. The tests examined three different kinds of hazards—spray fires, three-dimensional spill fires, and pool fires—using mineral oil as a fuel source. The study had two objectives: provide detailed visual documentation of potential fire scenarios in turbine halls and inform the comparison of new and existing schemes for mitigating losses due to fires.

To conduct the study, FM Global engineers built a large-scale mockup of a turbine hall (Figure 1) and placed it on a pedestal under a movable ceiling inside the Large Burn Laboratory at FM Global’s Research Campus (see “The University of Loss Prevention” sidebar). The pedestal, which cost $80,000, was made of steel rather than concrete because it had to be somewhat “portable” to accommodate various tests. Measuring 15 feet wide by 20 feet long by 18 feet high, the pedestal was equipped with a 7.5-ft grated walkway extending along one edge, to simulate an open-floor design. To prevent fire from deforming the pedestal during testing, water was pumped through pipes in its legs. 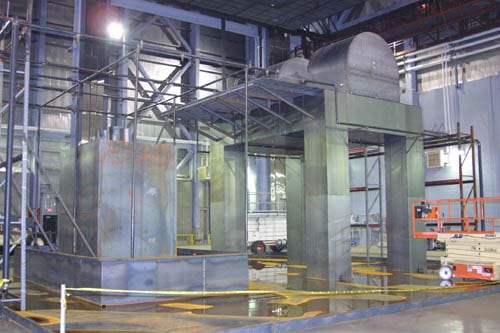 1. To physically simulate turbine lube-oil fires for analysis, FM Global built this power generation hall mockup in the Large Burn Laboratory on the company’s Research Campus in Rhode Island. At left is a lubrication-oil tank surrounded by a containment dike. At right is the pedestal, with high- and intermediate-pressure turbine housings on top and the grated floor/walkway extending out from the platform. Courtesy: FM Global

Once the pedestal was built, a lube-oil tank and pumping unit and high- and intermediate-pressure turbine housings were placed on it. Finally, after a dike was built around the lube-oil tank to contain spills, testing was ready to begin.

The University of Loss Prevention

Besides its nearly two centuries of experience, what differentiates FM Global from other insurance companies is its engineering expertise: in exposure analysis, risk identification, and quantification; and in mechanical and electrical integrity. The firm’s research division has a long record of making advances in the fields of fire prevention, material reactivity, risk assessment, and construction technology.

Perhaps nothing better exemplifies the company’s world-class status than the FM Global Research Campus, a $78 million scientific research and product testing complex located on 1,600 acres in West Glocester, R.I. The facility was built specifically to study all aspects of property loss prevention.

The cornerstone of the campus, which opened its doors in September 2003, is its fire technology laboratory, where full-scale fire-related “accidents” are simulated and studied. The lab is large enough to simulate a fire that might occur in one of the world’s largest warehouses and measure the impact of flame spread and fire growth. It also houses intermediate- and small-scale labs for research and testing of new fire protection technology and for simulating unique industrial facilities requiring custom property loss prevention solutions.

Discoveries made at the Research Campus have been instrumental in helping FM Global’s clients reduce the risk of fire, explosion, and natural hazards to their property. The results of research projects also help to establish new industry methods and standards that advance loss prevention practices and new product development.

For example, one project examined the collapse of steel frames in large fires. Computer models simulated the deformation and collapse of the frames in fires as hot as 1,832F and lasting up to four hours. The programs were able to accurately predict the collapse sequence and summarize the maximum foreseeable loss (MFL) from such fires by taking into account the temperature-dependent elastic, plastic, thermal, and creep properties of steel. The results of the analysis were used to assess potential damage to MFL firewalls as their steel deforms and collapses.

Also working on the FM Global Research Campus are structural engineers seeking to predict the extent of property damage from earthquakes. Of particular interest to power plant engineers are the results of recent tests that correlated sprinkler system performance and seismic loading. A variety of dynamic tests provided the data for complex computer simulations that analyzed the loads and deflections of various components of a building sprinkler system in response to seismic loading. The complexity of the simulation is clear when you consider that earthquakes produce both horizontal and vertical motion, and that the resulting forces can be amplified by the flexibility of sprinkler pipes. The results of this project are currently being used to develop sprinkler components and systems that are far more earthquake-resistant.

The fuel source was a standard mineral oil with a flash point of 285F and a heating value of 20,000 Btu/lb. Once ignited, this oil burns like gasoline.

During the 10 spray fires, ceiling temperatures reached nearly 1,500F without the sprinklers turned on and only slightly less than that with ceiling sprinklers alone. It’s worth noting here that temperatures above 1,000F can lead to steel deformation and, ultimately, roof failure.

The overall study produced both good and bad news from a property protection point of view. The good news was that floor-level sprinklers with a K-factor of at least 8.0 gpm/psi? and a discharge pressure of at least 50 psi were able to control all fire scenarios if positioned correctly. During the tests, the sprinklers, which were located on a 5 x 5-ft grid, also reduced gas temperatures at the ceiling from 1,500F to well below 400F.

As for the bad news, one of the biggest surprises of the study was that using an insufficient amount of water to douse a fairly routine pool fire actually made the fire worse. The fire erupted, engulfing the entire turbine platform in a fireball (Figure 2). 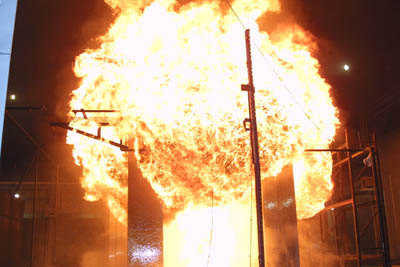 2. During one of the 10 spray fires set during the study, a huge fireball engulfed the mockup. Courtesy: FM Global

Among the study’s other noteworthy conclusions are the following:

Perhaps the most surprising conclusion of the study is that even a tiny release of oil can cause a huge fire. In very large gas turbines, oil often is pumped at a rate of up to 800 gpm. But although FM Global pumped the mineral oil at a mere 20 gpm during the tests, the fires that resulted were eye-popping. Figures 3 and 4, which were captured by an FM Global photographer during the study, show how large and dangerous the three kinds of oil fires can be. 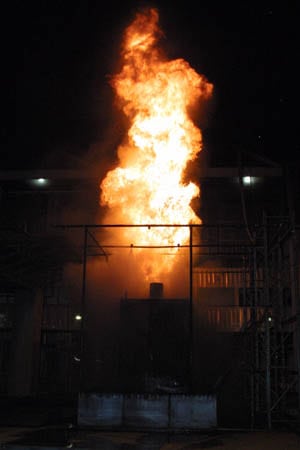 3. Spray fires can occur when there is a break in a lubrication system fitting or seal. The largest spray fires produced during FM Global’s test program had a thermal rating of 20 to 40 MW, equivalent to that of a fully burning small to midsize house. Courtesy: FM Global 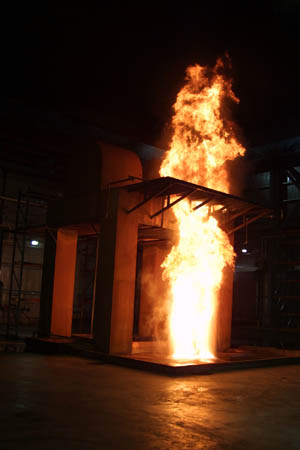 4. In three-dimensional spill fires, rising and falling flames give the appearance that the fire is moving up and down simultaneously. This can happen when oil leaks at a fitting or flange between a lube oil pipe and a bearing on the turbine’s upper level. Burning oil then spills to the surface below, creating a pool fire on the lower level. Courtesy: FM Global

Seeing the devastation caused in seconds by a lube oil leak in a mockup of what looks a lot like your plant should lead you to wonder whether your sprinkler system is up to par—as well as whether you have enough insurance. But the photos of real-life tests by FM Global’s research engineers, while dramatic, should also drive home the point that simulation followed by testing is the only way to identify ways to prevent and mitigate property losses in power plants.

As a service to the generation industry, FM Global has summarized four steps plant managers, operators, and technicians can take to prevent and/or mitigate the damage from turbine lube-oil fires (see sidebar). Naturally, the first recommendation is stopping the flow of the oil as quickly as possible. But if doing so also stops the flow of lube oil to the steam turbine, its bearing could be damaged or even seize, necessitating a very costly repair.

The fire protection professionals at FM Global can condense their experience with lube oil fires at clients’ steam and gas turbine power plants into four key prevention/mitigation recommendations. Cross-check them against the fire and safety system designs and standards at your plant.

Shut Oil Off Safely. Terminate the flow of oil as quickly as possible (but not immediately) to stop feeding the fire. Immediately stopping the flow can result in very costly damage to equipment. Shutdown procedures, which should take into account site-specific conditions, should take anywhere from 20 to 45 minutes.

Contain and Drain. To contain an oil leak, apply shields at potential oil spray leak points in the lube system and install curbing where necessary to stop the spread of leaking oil. This can effectively mitigate the potential for a spray fire in your facility. Meanwhile, draining leaking oil to a safe containment area minimizes fire risk by removing a potentially volatile fuel source.

Have an Emergency Response Plan in Place. Make sure all employees are trained in your company’s emergency response procedures. These measures should adequately address all three major turbine-generator types of fires (spray, pool, and three-dimensional spills).

For this reason, FM Global advises power plants to have in place a multi-level procedure for shutting down key equipment in the vicinity of a fire over a 20- to 45-minute period. During this time, other steps also can be taken to minimize the impact of the fire on the plant as a whole. The importance of having such a procedure in the plant operating manual should be clear because worrying about the steam turbine seizing during a fire is probably low on your to-do list at that moment.

Who would have thought that the insurance business could be so interesting?