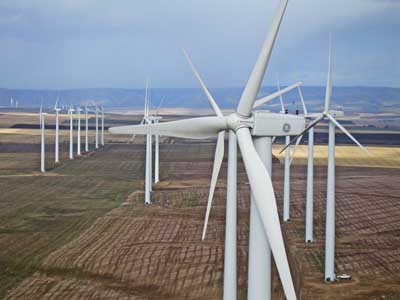 The third bearing failure came another 11 months later, in September 2007. This time, in addition to replacing yet another set of insulated (ceramic-coated) bearings and slip rings on both ends of the generator, the owner decided to install a conductive-microfiber bearing protection ring (Figure 2) manufactured by Electro Static Technology and a shaft collar with its specially enhanced highly conductive surface on the drive end. All components were installed by the regional distributor on September 12. The generator’s two standard carbon block, spring-loaded brushes, which rub on the slip ring at the non-drive end, were also replaced at that time. 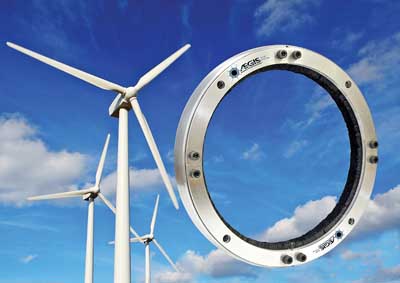 2. Get the collar. The owner elected to install a conductive-microfiber protection ring and a new shaft collar with a highly conductive surface to reduce shaft currents. Courtesy: Electro Static Technology

Nearly three months later, on December 4, 2007, a probe and oscilloscope were used to measure shaft voltage on the generator with and without the bearing protection ring and collar engaged. All measurements were taken on the same circuit for an accurate performance comparison (Figure 3). Wind speed ranged from 10.2 to 13.4 mph. Real-time data from these field tests show that the conductive-microfiber bearing protection ring and collar were reducing shaft voltage by an average of 84.5%. 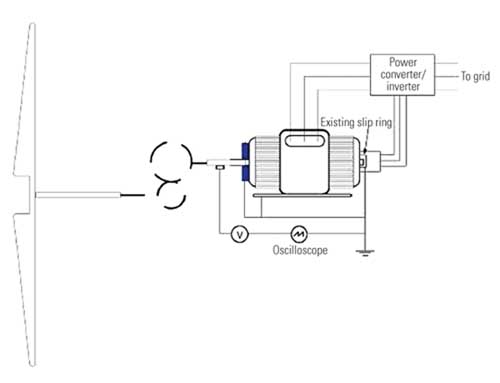 3. Performance tests conducted. After three months of operation, a series of tests were conducted to confirm that shaft voltages were reduced by the protection ring and collar. Source: Electro Static Technology

The first measurement, taken during full-power operation with a wind speed of 12.1 mph, established a baseline voltage (the system’s ground noise level) of 2.60 volts (peak-to-peak) from the 5.824-inch shaft of the tower’s doubly fed, asynchronous generator.

The crew then conducted eight more measurements in two series. The first series of readings measured the shaft voltage with all components engaged. The bearing protection ring and collar were on the drive end of the shaft, and the standard carbon block brushes were on the non-drive end (Figure 4a). For the second series of readings, the bearing protection ring was disengaged and the shaft collar was removed, leaving the non-drive-end carbon block brushes as the only shaft-current mitigation (Figure 4b). 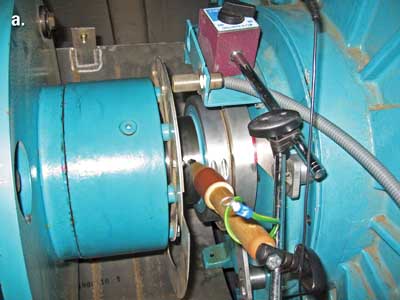 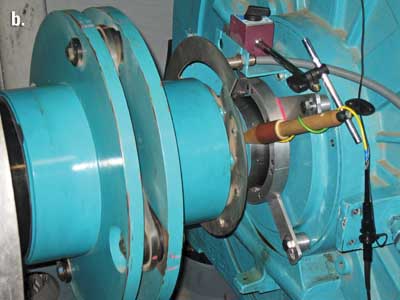 4. Probe locations. Shaft voltages were measured on the drive end (top), where the protection ring and collar were located, with the original equipment manufacturer’s (OEM’s) shaft brushes on the non-drive end for a series of tests. For comparison, the protection ring and collar were removed (bottom), leaving only the OEM carbon block brushes to control drive shaft currents. Courtesy: Electro Static Technology

High-frequency currents induced on the shafts of wind turbine generators through parasitic capacitive coupling can reach levels of 60 amps and 1,200 volts or greater. If not diverted, these currents discharge through the generator’s bearings, causing pitting and fluting that result in premature bearing failure and catastrophic turbine failure.

More specifically, the wind turbine bearing protection ring is engineered to safely divert up to 120 amps of continuous shaft current at frequencies as high as 13.5 MHz and discharges of up to 3,000 volts (peak). The conductive-microfiber bearing protection ring technology effectively steers these harmful currents away from the bearings and channels them safely to ground. (See "Controlling shaft voltages" in the May 2007 issue of POWER for more detailed information on the cause and effects of shaft voltages on turbomachinery.)

For this installation, the ring surrounds the generator shaft with millions of conductive microfibers of a very small diameter (less than 10 microns). Strong and stiff, yet flexible, these fibers provide a high density of contact points — parallel paths of least resistance from the motor shaft to ground. Capable of conducting currents of many tens of amperes and discharging from tens to thousands of volts with frequencies in the MHz range, the fibers significantly reduce voltage build-up on the generator shaft. The ring is especially suitable for use at high frequencies because its fibers tend to compensate for variations in the roughness of the shaft surface and/or microscopic misalignment of the ring and shaft.

When the microfibers lose mechanical contact with the rotating shaft, electric contact is quickly reestablished somewhere along the ring, due to local field emission. When the gap between the shaft and the fibers is relatively large (greater than 5 microns), this is accomplished through the phenomenon known as a gaseous or electric "breakdown," a cascading effect of secondary electrons obtained by collisions and impact ionization of the gas ions accelerating across the gap.

With a smaller gap (5 nanometers to 5 microns), field emission is a form of quantum tunneling known as Fowler-Nordheim tunneling, a process in which electrons "tunnel" through a barrier in the presence of an electrical field. Thus the ring fulfills all the functions of conventional spring-loaded carbon brushes with neither the direct frictional wear nor the hot-spotting/thermal wear common to such brushes.

And because multiple microfibers dissipate heat better than single-conductor devices, the ring can tolerate higher current densities. Furthermore, the microfibers are not adversely affected by oil, grease, dust, moisture, or other contaminants.

Results of the first series of tests of the turbine with the bearing protection ring installed show an average shaft voltage of 6.41 volts (peak-to-peak). Results of the second series of tests, in which only the spring-loaded carbon block brushes were used, showed an average shaft voltage of 41.35 volts (peak-to-peak). The difference between these figures, 34.94 volts, indicates that the bearing protection ring and collar successfully divert approximately 84.5% of the damaging current that remains on the tower’s generator shaft when the only bearing protection is from the carbon block brushes at the non-drive end (Figure 5).

Furthermore, the voltage wave form with the new ring and collar engaged was smooth, with no detectable discharge to the bearings, while the wave form without the ring and collar showed a bearing-current-discharge pattern with voltage peaks an average of 6.5 times higher. Also, conventional carbon block brushes apparently provide minimal protection, continue to allow current discharges in the generator’s bearings, and require frequent maintenance and replacement.

Damaged bearings can cause generator failures, which lead to costly repairs and unplanned downtime. In fact, a failed 1.5-MW generator can account for over $48,000 of lost revenue per month, and repair costs can add up to as much as $50,000. Consequently, the return on investment for preventing such failure is significant. A properly selected bearing protection ring should be included in every purchase contract and be installed at the factory, or be installed in the field as part of a comprehensive preventive maintenance program.