No doubt some power plant engineers feel that tackling environmental problems is a lot like dealing with the Hydra, the ancient mythological serpent monster with multiple heads. When an attacker would cut off one of the Hydra’s numerous heads, two new ones would grow back in place of the head that was removed. All too often engineers and technical staff at power plants struggle to overcome one environmental regulatory challenge only to turn around and find a whole new batch of environmental rules have sprung up that they have to deal with immediately or risk significant enforcement consequences.

Utilities currently are being hit by the double whammy of trying to comply with stricter environmental standards and dealing with the uncertainties pertaining to the potential for future carbon constraint regulation that might drastically impact their operations. Environmental decisions made today will have long-term implications for the future value of utilities’ assets.

Reflecting the growing impact that the Clean Air Act and other environmental mandates are having on the electric utility sector, this year ELECTRIC POWER offered two simultaneous tracks on environmental regulatory issues, compliance strategies, and new and near-commercial technologies. What follows are just a few examples of the wide-ranging presentations given by the speakers in these sessions.

In general, the New Source Review (NSR)/Prevention of Significant Deterioration (PSD) process under the Clean Air Act mandates that any major source (such as a coal-fired power plant), or major modification to an existing source that exceeds certain specified emission thresholds defined in the regulations, obtain permits and undertake other obligations prior to construction. The NSR rule allows exceptions for routine maintenance, repair, and replacement (RMRR) and increases in hours of operation or production rate.

Speaker Eric Hiser, an attorney with Jorden, Bischoff & Hiser, PC, highlighted several recent cases (New York v. EPA, United States v. Cinergy Corp., and Environmental Defense v. Duke Energy) that have dealt with the issue of what types of increases in emissions by utilities constitute a “modification” that triggers an NSR/PSD review. In the wake of these recent judicial decisions, reliance on traditional exemption-based strategies is perilous if there is a greater than de minimis increase in actual emissions, Hiser commented.

“The impact of these recent cases can be modified by strategic permitting and operation. Plant engineers need to permit broadly for a range of fuels and operating conditions. They also need to embrace alternate operating scenarios in Title V operating permits. Additionally, they need to stagger operations to maintain capacity flexibility,” Hiser said.

According to Hiser, the recent judicial decisions place a premium on contemporaneous documentation. He advised plant engineers to document what the company’s view of RMRR is and put the utility’s position “on the record” where appropriate, such as during permit proceedings. He also recommended documenting projects either generically (for routine operational changes) or on a case-by-case basis (for other changes).

Under the Clean Air Mercury Rule (CAMR), many coal-fired power plants in the U.S. would have been mandated to cut their mercury emissions below current levels by 2010, and additional reductions were scheduled to take place by 2018. In February 2008, however, the U.S. District of Columbia Circuit Court of Appeals dismissed CAMR and reinstated a more stringent regime as set out under the Clean Air Act Section 112. Currently, the EPA is regrouping and evaluating the impact from that decision. This regulatory rollercoaster underscores the need for utilities to develop more effective mercury capture systems as soon as feasible. (See “Future of national mercury rule now uncertain” in POWER, May 2008 for an in-depth review of the status and prospects of new mercury rules.) 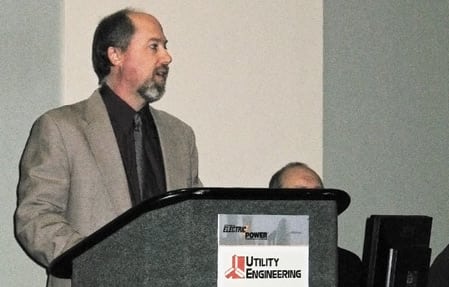 In the session that focused on mercury control technologies, Lawrence Bool, III, senior development associate at Praxair, discussed the production of powdered activated carbon (PAC), which is used for mercury capture from coal-fired power plants. He talked about the use of the new patented hot oxygen burner developed by his company. PAC is an often-used sorbent that can be effective for both elemental and oxidized mercury capture (Figure 1).

Bool explained how a patented burner is used as the basis of the multistage PAC production process. First, the hot, oxygen-rich gas mixes with pulverized coal feedstock and reacts in an entrained flow reactor. The oxidizing gas reacts with the carbon to open pores. Then a quench is introduced to cool the gas and solids. Cooled carbon particles and syngas are separated in a cyclone. Next, the syngas is returned to the utility boiler as fuel and the PAC is further cooled and sent to a storage silo. According to Bool, the process yields PAC with good mercury capture characteristics with a number of different coals.

Another session dealt with the looming impact of the Clean Air Interstate Rule (CAIR) on the utility industry. Speaker Joseph Skipper, project manager with SCR-Tech, pointed out that CAIR will soon take effect and promises to have a dramatic effect on the selective catalytic reduction (SCR) systems that are used to reduce nitrogen oxides (NOx) emissions. The annual NOx emissions cap will be reduced by 52% and the ozone season cap will be cut by 45%, both from 2003 levels.

“In addition to reducing the emissions cap, CAIR also makes year-round SCR operation mandatory beginning in 2009,” Skipper said. “Currently, SCRs only have to be operated during the ozone season in most states. Year-round operation will drastically increase the burden placed on the catalyst and the overall SCR system.”

According to Skipper, each utility needs to develop a customized SCR management strategy. Year-round SCR operations could trigger a number of challenges, such as increased exposure to flyash and large particle ash. Another challenge is that the increased consumption of ammonia by the ammonia system due to year-round operation will mean additional site deliveries, the addition of storage capacity, and increased maintenance of the ammonia system. An additional concern is that the lead time for catalyst regeneration will increase, so prudent plant managers should have spare catalysts on hand. Skipper encourages utilities to plan now to ensure a smooth transition to year-round operation.

“There is a growing consensus that CO2 from power plant flue gas is a large source of CO2 emissions that must be reduced to slow and eventually reverse the trend of climate change,” said speaker Harvey Wen, the manager of advanced technologies at Bechtel Power Corp.

According to Wen, in the past, amine-based CO2 capture plants were built to produce a small quantity of clean CO2 for industrial uses. A number of optimized processes, based on existing amine technology, are being developed for implementation in large-scale utility applications.

Wen focused on the next improvement areas that will come to light in the search for novel CO2 capture solvents. Chilled ammonia is one example, and if demonstrated with good economics, it will have broad applications. Other technologies, including oxyfuel combustion and chemical looping combustion (CLC), are still in development. Oxyfuel combustion is in the advanced development stage and, if successfully demonstrated, can be another option for both new plants and retrofit applications. CLC is a new concept to generate CO2-rich flue gas and does not require the use of an oxygen plant. However, CLC technology cannot be retrofitted. According to Wen, CLC is in the early stages of development and will not be ready for commercial use in the foreseeable future.

A closer look at carbon capture and sequestration

In his presentation about carbon capture and sequestration (CCS), speaker Steven M. Carpenter, director F&C business at Marshall Miller & Associates, provided a candid assessment of many of the pros and cons related to this new approach to dealing with CO2.

He also pointed out the challenges associated with different types of carbon transport. Pipeline transport from the source to the sink can involve legal and regulatory issues and energy consumption to compress CO2. In contrast, rail transport of carbon from source to sink is more expensive, requires liquefying and regasifying the CO2, and adds the expense of energy consumed to liquefy CO2 and move it by rail. Truck transport of carbon is the most expensive and least energy efficient.

Other CCS hurdles are related to legal and regulatory issues. According to Carpenter, these include:

Fortunately, however, according to Higgins, there is a growing body of data on the characteristics of FGD wastewaters taken from different points in the systems. His company contacted the Electric Power Research Institute, FGD wastewater treatment vendors, and scrubber manufacturers for typical FGD wastewater composition. (“Benefits of evaporating FGD purge water” offered an alternative for treating FGD purge water in the March 2008 issue of POWER.)

Because of the highly complex nature of FGD wastewater, several stages are required to treat the blowdown from the FGD scrubber so that wastewater meets NPDES requirements for surface water discharge. Treatment typically consists of the following steps: