It is rare indeed to witness, at an otherwise staid industry forum, the public rebuke of the country’s most prominent supplier to the electric power industry. But at the Keynote session and Power Industry CEO Roundtable of the 2008 ELECTRIC POWER Conference & Exhibition in Baltimore this May, Milton Lee, general manager and CEO of CPS Energy (City Public Service of San Antonio), apparently wanted to make sure representatives from General Electric Corp. heard what he had to say (Figure 1). At one point he asked for a show of hands of attendees from GE. Then he proceeded to describe how GE added risk to the nuclear energy business by backing out of South Texas Project’s (STP) new construction program. 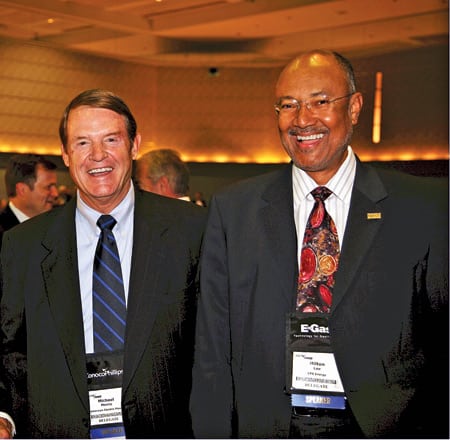 1. Too slow to market. Michael Morris, chairman and CEO of American Electric Power Corp. (left), and Milton Lee, general manager and CEO of CPS Energy (City Public Service of San Antonio) (right), spoke on the challenges and opportunities of developing new nuclear plants in an era of political and regulatory uncertainty. Source: POWER

Details of the flare-up were revealed in a follow-up article published in POWER’s sister publication, Energy Daily. Lee clarified his remarks in an interview, saying that GE refused to work with STP on building the advanced boiling water reactor (ABWR), which is commercially proven and operating at several sites in Japan, and instead pushed its newer economic simplified boiling water reactor (ESBWR) on STP. The global behemoth denied this, immediately issuing a statement that GE had pulled out because STP had switched prime contractors.

While the public drama was rare, the dilemma is anything but, and it points to the central challenge facing these CEOs, the industry, and the rate-paying public: What to build next for baseload supply, and how to pay for new supply and/or conservation (with ratepayer and regulator blessing) when cost pressures are virtually everywhere?

A game you can’t win

The situation reminds me of that old street game, once popular in cities like New York, called Three-card Monty. You guess which hat the card is under after the scammer has moved the hats around the table at a dizzying pace. A plant in the audience makes sure you never win your bet. Power generators are essentially being asked to pick an option to meet electricity demand while the cards are constantly in motion. It’s no wonder Pat Wood III, former chairman of the Federal Energy Regulatory Commission and principal, Wood Resources, began his “State of the Industry” keynote address by saying, “The state of the industry is cautious.”

Thomas Brooks, VP energy for Constellation Energy, noted that electricity suppliers must meet three competing objectives: Supply abundant, cheap energy; deliver flawless reliability; and reduce environmental impact. CEOs must determine what option will meet these objectives for the next unit they build. The problem is that no option is likely to meet all three objectives well at all.

Which fuel would you pick?

Although it wasn’t the knockout punch that Lee threw at GE, Morris jabbed at nuclear throughout the session. At one point, he asked how a utility with a $10 billion market cap could build a $17 billion nuclear unit. He’s got a valid point, when you start thinking through the financial issues.

But other fuels have their problems, too. There wasn’t much support for natural gas with this crowd. Morris said he was “not bullish” on the fuel. And Brooks added that electric power should not follow the same regulatory policy as the natural gas sector. Jim Rogers, CEO of Duke Energy, which recently merged with Cinergy Corp, warned that greater demand for gas and liquefied natural gas imports could tie the price of electricity in this country to world oil prices.

Though new coal units are popular with these CEOs, coal’s difficulties were acknowledged. Wood called coal a “pariah today,” although he identified some quiet successes where units have been built. Morris insisted that clean coal is more timely than nuclear. Fred Fletcher, assistant general manager of Burbank (Calif.) Water & Power, acknowledged that half of his company’s electricity comes from coal, except that’s it’s all located out of the state. Rogers has gotten approval to build a new unit in North Carolina but has to shut down an equivalent amount of old coal. “We’re not adding to the fleet,” he said.

Though the need for new baseload capacity is clear to these CEOs, it represents kilowatt-hours available within the next five to 15 years, so they’re also necessarily looking at what they can do now. All addressed the current darlings of ratepayers and regulators: renewable energy and demand-side management.

Morris pointed out that although renewables are economically inefficient, they are environmentally required. He indicated that AEP is working on battery-based storage technology “to make them 24/7.”

It was also refreshing to hear Wood mention that “storage issues are in the forefront.” Integration of wind energy with the grid is the issue, he said (Figure 2). The system is good at handling variable load, but not variable supply. The impetus for solving grid issues is clear, Wood implied, when you consider President Bush’s recent statement that 20% of the nation’s electricity should come from wind. 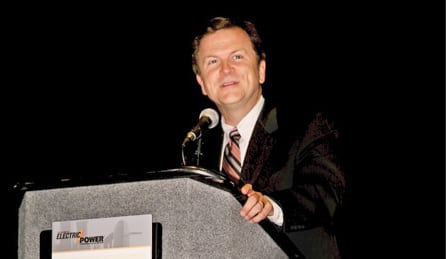 Lee’s CPS Energy is making a $100 million “initial investment” in conservation and hopes to delay or avoid a baseload power unit by doing so. But, since the utility expects to double its generating capacity over the next 10 years to meet load growth, a huge capital program is still necessary that will likely raise rates 5% per year over the next decade.

Lest anyone think that they, unlike Lee’s ratepayers, will escape punishing rate increases around the country, regardless of how the next unit is fueled, know that virtually every panelist addressed this issue in different ways. Wood set the stage for this discussion when he reminded the audience that while retail electricity prices have increased by one-third, the national average is 9 cents/kWh. “That’s small compared to gasoline,” he pointed out.

Rogers noted that the real price of electricity came down for 15 years but now is going up, because input costs (for coal and gas) are rising, new baseload units are necessary for the first time in 30 years (in his service territory), carbon legislation is likely in 2010, and the industry needs to convert from analog to a digital, smart grid (Figure 3). He added that the weak dollar is driving up the costs for everything. 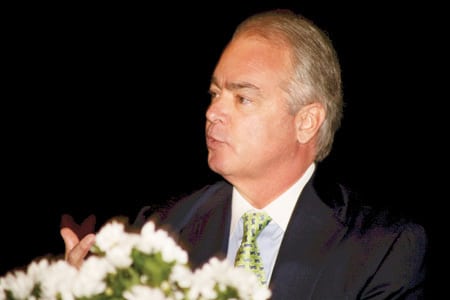 Morris noted that Americans are not about to become good at energy conservation and that price signals are the only way to check growth in demand.

Fletcher distinguished between “the two hundred commercial and industrial customers that represent half of his load,” and the rest of the ratepayers. He said he needs a “robust digital grid” to serve these customers.

Rogers seconded the importance of a digital system, estimating that “50% of electricity use will be digital in 2020.” We need to optimize networks for our customers but we have to figure out how to get paid, he said.

Fletcher said that “the rate impacts will be the largest in the memory of the voters.” That is an ominous observation for politicians in a state that effectively threw out former Governor Gray Davis over skyrocketing electricity rates in 2001.

Brooks observed that when electricity prices are low, no one cares, but when prices rise, you are “public enemy number one.”

Electricity prices may even be one factor hurting the generation industry’s rep among its potential labor market. Kids don’t want to work in the power industry, lamented Lee. He called for getting our education system to cultivate the brightest minds to work in our industry; Wood had earlier called for a post-Sputnik type of program to develop new people resources.

Government relations took up much of the panel’s air time. Lee said he’s spending his time in Austin and Washington, D.C., making sure regulatory risk is properly managed.

Lest the feds get all the attention, Morris (Figure 4) reminded the audience that “the in-state financial regulator is the ultimate permit holder” for a nuclear unit, not the Nuclear Regulatory Commission.

Rogers noted that so-called “stroke of the pen” risk (passage of legislation for which the consequences are not adequately foreseen) is greater when prices are rising. He insinuated that corn-based ethanol was an example and noted, “look how wrong D.C. got that!”

Obviously, the stroke-of-the-pen risk that keeps everyone up at night is climate change legislation, which is tied, like a ball and chain, to the future of coal. Ultimately, said Brooks, the CO2 program has to deal with its regressive nature. “It is a tax on the ratepayer,” he said, whether it’s a bona-fide tax or a cap and trade program.

Morris estimated that paying for the Lieberman-Warner bill (which has since died in the Senate) “will double our costs” and insisted that “inadvertent legislation on global warming could devastate the bottom 20% of the population.” He warned that the situation could become like the one faced by South Africa, where a lack of electricity is now devastating that country’s economy. Rogers claimed that the Lieberman-Warner bill “bastardizes cap and trade” from the SO2 model and has now become a way for the federal government to raise money and spend it. Lee and Rogers, like Wood, prefer a carbon tax to cap and trade, though Lee would like to see the money spent for industry R&D and economic development. (See Rogers’ commentary)

Several agreed that it would be folly to try to mitigate global climate change without a global framework.

Here is the most interesting paradox of the session. Many panelists had harsh, though carefully couched, words for government’s role in the energy business. Yet all of them are asking the government for something.

One, deriding the government for raising $20 billion from nuclear utilities for waste management but never delivering on the service, said he thinks we need a broader electric grid with federal control, kind of like the interstate highways. Another said we should rely on the profit motive instead of the government, but then insisted that federal loan guarantees were necessary to kick-start new nuclear units. Someone from the audience asked about the now-cancelled FutureGen project, and one of the CEOs who decried government’s role in corn-based ethanol said that “DOE made a mistake” in pulling out of that project.

It just shows that when the government spends money on things you like, government is good. When it doesn’t, it’s bad. Managing this paradox is certainly what Rogers was referring to when he said “political engineering” will be the key to success.

Perhaps an old saying comes to mind when thinking about the government and electricity: Can’t live with them; can’t live without them. The electricity industry should try to figure out how to live with a government that’s not only in a populist frame of mind (worried about the impact of high energy prices) but also willing to consider global climate change legislation that adds tremendous cost to the system—at a time when the federal government is deep in debt from overseas military adventures and unrestrained domestic spending, in hock to Asian governments who buy our treasury bills, and desperate for revenue.

What we will all pay for climate change legislation through electricity rates ultimately may be what pays for government mismanagement elsewhere in the budget. That’s the legal form of Three-card Monty.