Corrosion of steel water pipes in the safety-related piping systems of aging U.S. nuclear power plants is fast becoming a safety concern and a significant operational cost, not to mention an indication of potential future liability for nuclear utilities currently constructing new plants or retrofitting existing sites. According to the Electric Power Research Institute, the physical maintenance of degraded steel water pipe systems, combined with the operational costs of shutting a plant down during repairs, is already costing some nuclear utilities up to $25 million per year.

The problem is particularly sensitive when the water pipe systems in question are safety-related, such as the essential service water (ESW) systems that stand ready to cool a reactor when needed. In these systems, water-cooled secondary heat exchangers are used to maintain public safety and power generation continuity. Lost revenue from a system shutdown, which is likely when an ESW system fails, can be more than $1 million per day for a utility due to the expense of purchasing electricity on the open market to replace what was being generated by the plant.

Carbon steel pipe is the incumbent medium for transporting water to heat exchangers in ESW systems, but alternatives are being explored and, in the case of Ameren’s Callaway Nuclear Power Plant in Fulton, Mo., alternatives are now in operation.

An Alternative to Carbon Steel

AmerenUE, a subsidiary of Ameren Corp., has pioneered the use of polyethylene (PE) as a new alternative to steel pipe ESW systems at its 1,200-MW Callaway plant. Polyethylene material does not corrode, rust, rot, pit, tuberculate, or support biological growth. It also has an outstanding field performance record for more than half a century in water piping systems. Taking advantage of material science advances in bimodal polyethylene resins and a collaborative effort with a resin supplier, a pipe manufacturer, a pipe fittings manufacturer, an engineering contractor, and a primary construction contractor, AmerenUE engineers and construction teams have successfully replaced the carbon steel ESW pipe system at Callaway with a new class of bimodal high-density polyethylene (HDPE) pipe (Figure 2). 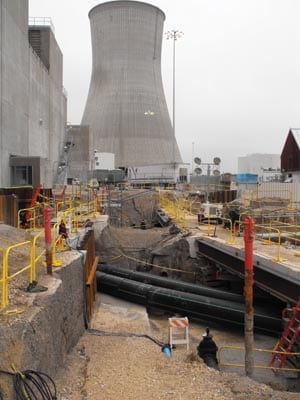 Prior to the installation at Callaway, PE pipe had not been used for a safety-related ASME Class 3 water pipe application at a nuclear power plant in the U.S. AmerenUE’s use of bimodal HDPE met all design requirements, was validated with extensive test data, and has also received approval from the Nuclear Regulatory Commission (NRC). This use of HDPE in a safety-related water pipe system is a first for the U.S. nuclear power industry and could be instructive for other nuclear utilities grappling with steel water pipe corrosion issues.

The ESW pipe systems at Callaway hold and transport service water drawn from the reservoir pond inside the plant. Since the plant started operations in 1984, the original buried carbon steel water pipe systems have been continually susceptible to corrosion, fouling, rusting, and microbiologically induced corrosion, leading to pipe integrity issues such as pinhole leaks, pitting, and other localized forms of degradation. The detection of even a single pinhole leak meant taking down the offending ESW system for up to 72 hours for repair and sometimes resulted in the plant being shut down entirely. It takes several days to restart a nuclear plant, and problems literally the size of a pinhole were sometimes costing AmerenUE up to $1 million per shutdown.

The tipping point at Callaway was a combination of test results and an internal visual inspection of an ESW pipe in early 2007. Though it had only been in service for 24 years, the unlined water pipe system once again showed signs of significant degradation, including four pinhole leaks and pits. Frustrated at the prospect of yet more disruption and spiraling maintenance costs, the Major Modification Group and mechanical design engineers at Callaway determined that they would start to evaluate alternatives to carbon steel pipe. One immediate option was HDPE, which had already been used at Callaway in non-safety-related water pipe systems such as fire protection piping. The installation of this system gave Callaway engineers valuable experience with HDPE and pipe fusion methods.

HDPE pipe was attractive to AmerenUE at Callaway for several reasons:

As this was to be the first ever use of HDPE in a safety-related water pipe system at a nuclear plant in North America, the team at Callaway had to create a material specification and related procedures from scratch. In the process, they underwent a change in mindset from focusing on what was available to specifying what was really needed. Most importantly, Callaway engineers began to work closely with members of the HDPE pipe value chain. These players included The Dow Chemical Co. (Dow) as the HDPE supplier, WL Plastics Corp. as the pipe manufacturer, and Independent Pipe Products Inc. for the manufacture of special pipe fittings. The consultant, Frank Schaaf, Jr. of Sterling Refrigeration Corp., was also instrumental in the work necessary to gain approvals from the NRC (Figure 3). 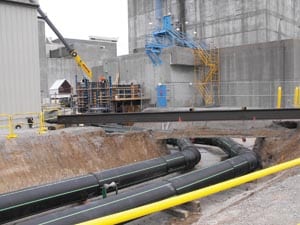 3.    Plastic replaces steel. HPDE pipe and joint fittings were required to be tested to confirm that they met the quality and safety specifications of ASME Class 3 nuclear service piping systems. AmerenUE submitted a special Relief Request to the NRC in 2008 demonstrating that HPDE pipe could be used instead of carbon steel pipe. Courtesy: Dow Chemical Co.

After an evaluation of available options, and based on the service condition and stringent requirements for HDPE pipe performance, the Callaway team selected CONTINUUM DGDA-2492 Bimodal Polyethylene Resin from Dow as the raw material for its new ESW secondary water pipe system. Given the groundbreaking nature of the application for HDPE pipe, no American Society of Mechanical Engineers (ASME) code and standard is available. Callaway needed to obtain approval from the NRC through a Relief Request. In order to be approved for use by the NRC, water pipes manufactured from HDPE had to demonstrate that they could match the quality and safety specifications of ASME Class 3 nuclear service piping systems. AmerenUE submitted a special Relief Request to the NRC in 2008 with documentary evidence proving that the specified HDPE pipe could be used in lieu of carbon steel Class 3 pipe.

The Relief Request asked for NRC approval for using HDPE pipe based on the specified CONTINUUM DGDA-2492 resin. Callaway engineers knew that the HDPE pipe would need to meet water pressures of 161 psig at 95F and 45 psig at 176F. CONTINUUM DGDA-2492 has a 2.5-year pressure listing by the Plastic Pipe Institute, exceeding the application of a three-month requirement, at 176F.

Initially, the NRC had a concern regarding the effect of increased stress intensity on the slow crack growth (SCG) resistance of the proposed 36-inch pipe. This concern was mitigated because CONTINUUM DGDA-2492 resin has >10,000h PENT, more than 20 times better than the most stringent ASTM SCG requirement for PE4710 (a higher performance standard for HDPE pipe); it meets and exceeds the requirement at the adjusted higher stress intensity. In addition, the NRC requested that Callaway conduct extensive testing on the joint to ensure the integrity of the pipeline. As a result, a total of 168 pieces of fusion joint samples were tested using NRC-recommended test methods. All joints passed the test without a single failure. The request was officially approved by the NRC on October 31, 2008.

AmerenUE anticipated such a result, and its engineering firm, Sargent & Lundy LLC, together with its primary construction contractor, Corrigan Mechanical, moved quickly to make the piping replacement at Callaway.

Installation of the HDPE ESW pipe project was completed by December 9, 2008. Approximately 1,800 feet of 36-inch HDPE pipe (with 4-inch wall thickness) was installed underground at the site. A number of special HDPE joint fittings at 45-degree and 22.5-degree angles were also successfully fused to the main pipe components.

The new HDPE ESW system was started up on December 10, 2008, and immediately demonstrated its value. Callaway engineers noted no vibrations in the HDPE sections of the system, though some steel pipe sections in the pump house did vibrate due to a static issue. In addition, due to the lower friction, the new HDPE pipe was found to allow about 150 gallons more water flow-through per minute than the previous steel pipe it replaced, even with a smaller inside diameter.

According to the team at Callaway, this installation is a first important step toward HDPE becoming a preferred material for safety-related water pipe systems at nuclear power stations. AmerenUE is already planning to replace other buried piping with HDPE in other systems in 2009.