The conventional wisdom that natural gas is a reasonable, but temporary, power-generating bridge fuel to a future of a nuclear and renewables generation may be dead wrong, according to recent developments in finding and exploiting gas. A whole lot more natural gas may be available in the U.S., and at lower prices than recent market spikes and the conventional wisdom suppose.

The first cause for a reappraisal of gas supply is the emerging understanding of the amount of natural gas locked within shale deposits across the country. This is called “unconventional” gas, because it doesn’t typically respond to normal “field of dreams” gas production: If you drill it, it will come.

The first “ah-ha” moment about unconventional gas came, in a practical matter, from the Barnett Shale “tight gas” play around Fort Worth, Texas, a decade or so ago. At geology.com, Marc Airhart of the Jackson School of Geosciences, the University of Texas at Austin, wrote, “In less than a decade, the Barnett Shale play has become the largest natural gas play in the state of Texas and, as new wells sprout like bluebonnets across the Fort Worth region, it might soon become the largest in the nation.”

The key to shale resources is new technology for drilling for gas and for getting it released from densely layered rock strata: horizontal drilling and hydro-fracturing (using water, sand, and chemicals at extremely high pressures to crack open the stratified shale so it releases natural gas). The seams in the rock formation are largely vertical, so horizontal drilling breaks them apart. Then the water at high pressure further blows the seams away from each other, releasing much more gas than conventional drilling.

Lately, a lot of interest has switched to the Marcellus Shale formation that spans much of Appalachia. Using horizontal drilling and hydro-frac technology, developers foresee a vast potential for new, unconventional gas reserves. According to geology.com, a website created and run by geologist Hobart King, developers and the U.S. Geologic Survey in 2002 began to scope out the Marcellus resource.

By last year, says the website, “Terry Englander, a geosciences professor at Pennsylvania State University, and Gary Lash, a geology professor at the State University of New York at Fredonia, surprised everyone with estimates that the Marcellus might contain more than 500 trillion cubic feet of natural gas. Using some of the same horizontal drilling and hydraulic fracturing methods that had previously been applied in the Barnett Shale of Texas, perhaps 10% of that gas (50 trillion cubic feet) might be recoverable. That volume of natural gas would be enough to supply the entire United States for about two years and have a wellhead value of about one trillion dollars!”

The online article adds: “The presence of an enormous volume of potentially recoverable gas in the eastern United States has a great economic significance. This will be some of the closest natural gas to the high population areas of New Jersey, New York and New England. This transportation advantage will give Marcellus gas a distinct advantage in the marketplace.”

The latest “big thing” to hit the calculations of unconventional gas reserves came in May this year from the U.S. Department of Energy and relates to methane hydrates. These chemicals, also known as “clathrates,” are basically ice structures containing pure methane frozen in water crystals.

In a mid-May news release, the DOE’s National Energy Technology Laboratory, based in Pittsburgh, said it had found commercial quantities of gas hydrates in the Gulf of Mexico (see photo). The DOE said, “Gas hydrate is thought to exist in great abundance in nature and has the potential to be a significant new energy source to meet future energy needs. However, prior to this expedition, there was little documentation that gas hydrate occurred in resource-quality accumulations in the marine environment.” (See also this story on gas hydrates in the May 2009 issue of POWER.) 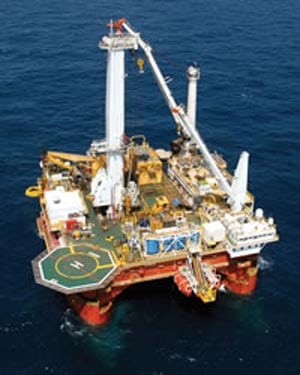 For decades, methane hydrates have intrigued geologists and energy analysts. In the 1980s, the late Cornell University astrophysicist Thomas Gold posited that the hydrates were evidence that natural gas was not just a result of rotting hydrocarbons—dead dinosaurs and the like—but part of the primordial chemical makeup of the universe, going back to the “big bang.” Methane, CH4, one of the simplest chemicals in the universe, Gold argued, was part of the original chemical mix of the universe and was part of the creation of Earth.

Gold predicted that large methane hydrates deposits eventually would be discovered (he targeted the Gulf of Mexico as the most logical place for initial discoveries), making natural gas an essentially endless energy supply. Conventional petroleum geologists scoffed at Gold’s ideas, portraying him as a fuzzy physical theoretician who didn’t understand real geology.

That’s changed. Now, says the DOE, its joint venture project with the Interior Department and Chevron has found methane hydrates “at saturations ranging from 50% to more than 90% in high-quality sands.” That means the discovery is very desirable commercially. The DOE press release also said the project had located the hydrates in line with its pre-drilling predictions, “providing increased confidence in the gas hydrate exploration and appraisal technologies.” In other words, this is probably the real deal.

Gold’s vision isn’t completely ratified. The ubiquity of gas hydrates that he predicted isn’t yet confirmed, nor is it debunked, according to geologists. Conventional petroleum geologists still remain skeptical, although the empirical evidence is eroding their position.

What’s next for gas hydrate formations? More R&D, says the DOE. But expect to see some major private sector investment in hydrates in the near future, according to natural gas industry sources. Gas may turn out to be far more than a bridge fuel to newer, low-emissions technologies. It may be the future of electric power and transportation fuels.