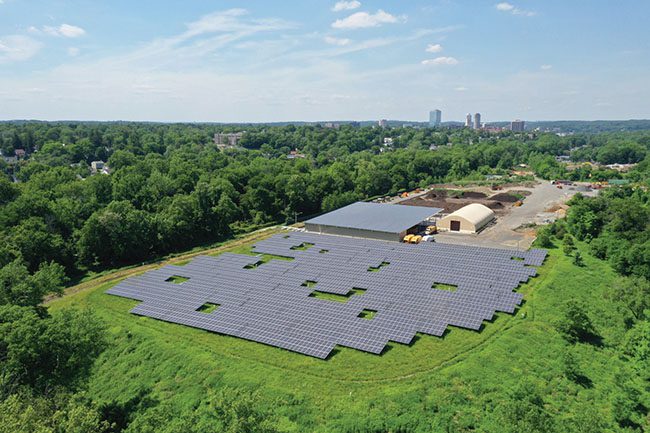 The City of White Plains in Westchester County, New York, a densely populated outer suburb of New York City that serves as the county seat and commercial hub of Westchester, had fostered a vision for nearly a decade. It has, since 2014, actively explored integrating large-scale solar into the fabric of the municipality, using a city-owned portfolio of sites, promoting its commitment to clean energy initiatives. Led by Mayor Thomas Roach, this effort also sought to deliver a forward-looking sustainable solution that would streamline solar’s adoption and provide direct financial value to White Plains’ industry and residential households.

The city was determined to achieve its vision through incremental steps, but it had already purchased power from New York Power Authority (NYPA, whose administrative offices are in White Plains) at a low price, making such a project difficult to justify economically. However, in 2019, Mayor Roach launched a bold proposal that “made economic sense.” It called for installing solar panels—about 6 MW combined—on eight municipal properties under an emerging business model that allows a developer to own and maintain the system on a city-hosted property over an agreed term. The proposed solution allowed the city to sidestep the large capital outlay required for a project of that size and to sidestep challenges associated with the system’s surplus power.

At the mayor’s request and aided by NYPA, which served as the project’s energy consultant, the New York Department of Public Works prepared a request for proposals (RFP) that solicited more than 100 qualified developers. White Plains received eight competitive proposals. After a thorough evaluation and interview process, the city ultimately chose to partner with Schenectady-based Distributed Solar Development LLC (DSD Renewables) under a multi-year agreement with a key aim: to establish a community solar program in conjunction with distributed system operator Con Edison.

The opportunity was attractive all around, David Eisenbud, senior director of Business Development for DSD’s Origination group, told POWER. When the RFP was issued, DSD Renewables was in the midst of rapidly broadening its core solar-as-a-service business model, which it had fostered since its launch in 2013 as a GE-incubated firm. In 2019, it spun off of GE, with backing from investment giant BlackRock Real Assets, as a commercial and industrial (C&I) solar, energy storage, and electric vehicle (EV) charging infrastructure project developer, financier, asset owner, and operator.

“We have the capital in the backing from BlackRock to go further into the market, as well as the robust DNA [fostered at GE] of having very deep engineering and technical services to support early-stage project development on behalf of our clients. We are able to deliver heavily designed, well-thought-through, high-value solutions,” said Eisenbud. The company today has developed and deployed more than 370 MW of C&I solar and energy storage projects in the marketplace, including hundreds of projects that its in-house asset management group owns, operates, and manages.

Under the original February 2020–finalized agreement with the City of White Plains, DSD built, owns, and manages power from solar assets installed at eight city-owned sites. These include five rooftop canopies ranging from 325 kW to 1.5 MW at four parking garages (Longview Garage, Lyon Place Garage, Chester-Maple Garage, and Shapham Place Garage), and a lot at the city’s Gillie Park. The portfolio also includes two flush-mounted rooftop installations on the roofs of the city’s Sanitation Complex and Ebersole Ice Rink, as well as a unique 2.3-MW ground-mount installation at its Gedney Way Recycling Center. The systems at the Gedney Way recycling facility and Shapham Place parking garage include Tesla Megapacks as part of their installations.

DSD later expanded the portfolio to include another custom-built canopy at a Gedney Way site for the city’s Water Department. Combined, these projects represent a 6.8-MW community solar and 1.76-MW/8-MWh energy storage portfolio. Eight of the sites were completed by July 2021 (the additional Gedney Way site will be completed by the end of summer 2022). In total, the portfolio will generate an estimated 8,100 MWh annually—tripling the amount of solar energy produced in Westchester County.

DSD Took on the Initiative, Bore the Risks

The agreement called for DSD to “take the initiative and fund all the development work to secure incentives, as well as security entitlement around interconnection, working with Con Edison, and structure the project so that we can maximize capacity,” said Eisenbud. DSD partnered with Perch Energy, a firm that pioneered a model of acquiring community solar “subscribers” online, essentially to deliver an aggregated offtake to renewable asset owners and developers. When the solar power is delivered to the Con Edison grid as metered energy, these subscribers receive utility bill credits that are based on the amount of energy delivered by the community solar portfolio, allowing them to accrue savings on their energy bills, Eisenbud explained. “DSD has the incentive to operate these projects efficiently to deliver as much energy to the grid as possible.”

As the “anchor tenant,” the City of White Plains also gets discounts on its energy usage. However, a “significant portion” of DSD’s revenue generated by the portfolio is paid back to the city as host site lease payments. The city anticipates it will receive more than $20 million in lease revenue across the 25-year agreement’s term. The city has said it will reutilize a substantial amount to “advance additional sustainability initiatives, facilities, and infrastructure in the city.”

The White Plains portfolio arrangement’s base structure as a community solar project is typical, Eisenbud noted. What makes it unique, however, is that the large-scale solar and energy storage capacity is distributed within an urban environment. Community solar, which is more commonly installed at greenfield rural sites, often involves a private landlord, posing real estate ownership challenges, title challenges, and potential landlord-versus-tenant issues. “What we’ve done at 6.8 MW within a dense urban space is rare,” he noted.

A Solution Tailored for Urban Densification

DSD navigated road closure restrictions and unique equipment for each of the nine different sites, including installing a canopy atop a nine-story parking garage that serves the White Plains hospital. All garage-top canopies are outfitted with a proprietary DSD W-shape design and a patented integrated water management system that prevents icicle formation and directs the rain and snow melt from dripping through the surface.

It also relied on engineering innovation to resolve challenges. To install the ground-mount installation at the recycling facility, for example, DSD came up with a customized solution to avoid penetrating the thick asphalt surface that paves a landfill onsite managed by the New York Department of Environmental Conservation (DEC). DSD’s design called for a large canopy of nearly 700 kW.

“When you build a solar canopy on a surface lot, the ground clearance must be high enough to allow snowplows, emergency vehicles, buses, and trucks to pass underneath,” said Eisenbud. Drilled pier foundations are typically about 3 feet in diameter and about 20 feet deep, depending on soil conditions. “For garage-top canopies, steel canopy columns connect to existing concrete columns, which are typically spaced further apart requiring more steel—especially when the canopy is about 100 feet above ground level,” he said.

On the landfill site, DSD was able to engineer a unique ballasted canopy that sits on top of the asphalt area of the landfill cap. Three big slabs of concrete uniformly distribute the weight and forces from the canopy, and one portion is walled to provide a protected space that the city uses to store facility equipment. DSD’s efforts to preserve the site’s functionality notably prompted the city to add another 324-kW canopy to the landfill site designed to store equipment for the Water Department.

The second installation features 28 spread foundations, gravel fill, and a full perimeter enclosure. “The city now has covered storage. They were contemplating having to bring in an engineer and build a separate building, which was going to cost them hundreds of thousands of dollars,” noted Eisenbud.

All Degrees of Collaboration and Engagement

DSD has gleaned lessons from the White Plains project and applied them to several large-scale projects. These include the seven sites it repurposed in Schenectady County, New York, with solar and storage, a continuous canopy structure at an MGM Springfield complex in Massachusetts, and a suite of canopies still under development at casinos in Atlantic City. A key takeaway, according to Eisenbud, is that complexity requires good management. Portfolios must be designed and built simultaneously, at multiple locations, and within a tight timeline, all while taking into account multiple users and stakeholders, he noted. “We really needed to work around user experience and take extra care not to disrupt operations,” he said. “It takes more engagement and coordination to orchestrate project delivery.”

Building solar community projects and C&I projects as portfolios, however, is a worthy feat, given their myriad benefits for developers, customers, and energy consumers. “We can take a holistic view of the different applications, design needs, and sites. And from a procurement perspective, these will move as a block together even though we set each one up individually because you never know the timing behind entitlements, interconnection, and incentives,” he said. For the White Plains portfolio, at least, developing the projects simultaneously was efficient given collective engineering work and from a resource perspective. “We’re also able to contain our costs better,” Eisenbud said. In the end, the efficiency is part of the company’s service to its municipal partner.

“It’s never easy to disrupt operations that directly serve the public, and I have a deep appreciation for the city personnel who embraced this initiative, quickly learned how a solar project is constructed without compromising those public expectations. There were real pressures on our municipal customer in this case,” he said, “and I think it was a great partnership that had communication going both ways to make sure that the projects could be delivered safely, look great, and perform well to serve the public interest in the long run.”