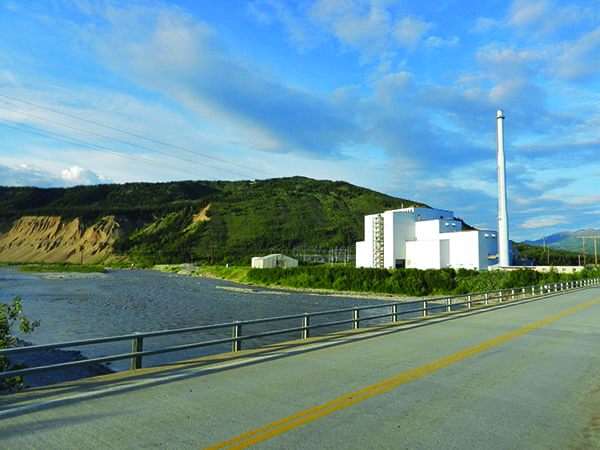 Coal is the reason that Healy, Alaska, exists. To ensure low-cost power and reliability to interior Alaska—a remote place that is bereft of gas and has little sun in the winter—and sustain regional employment, Golden Valley Electric Association set out with determination and ingenuity to overcome potentially debilitating setbacks and refurbish a faulty 50-MW unit.

Healy, nestled at the cusp of Denali National Park, among snow-capped mountains and glassy lakes, has a population of 1,025, and it has cultivated a substantial tourism industry to cater to scores of visitors who traverse the Alaskan heartland to experience its raw beauty. The core of its economy, however, stems from a long legacy in coal mining. The town sprouted in the 1900s to support mining operations in the Healy Creek Valley. During World War II, as the region’s coal mining operations grew into an important supplier to a military base in Fairbanks, Italian immigrant Emil Usibelli founded Usibelli Coal Mine Inc. (UCM), a company to run the Usibelli Coal Mine. In the decades that followed, UCM expanded mine production from 10,000 tons to between 1.2 million and 2 million tons of subbituminous coal per year. Today, it is Alaska’s only operational coal mine.

In 1946, only three years after UCM was founded, Golden Valley Electric Association (GVEA) set down its own roots in Fairbanks, 115 miles north of Healy, as part of an effort by locals to bring electric service to rural areas. GVEA’s customer base has expanded to nearly 100,000 residents in the state’s interior, and it meets demand with eight generating facilities, which are a diverse mix of coal, solar, oil, and wind. GVEA first made its mark on Healy in 1967, when it completed a 25-MW mine-mouth coal-burning power plant. That project, known today as Healy 1, is still operating.

In 1991, the Alaska Industrial Development and Export Authority (AIDEA) struck a cooperative agreement with the U.S. Department of Energy (DOE) to demonstrate technology from TRW. TRW’s Clean Coal Combustion System used an advanced slagging combustor and heat recovery system coupled with high- and low-temperature emissions control processes at a site adjacent to GVEA’s Healy 1. The ambitious project required fitting a boiler with two 350-MMBtu/hour TRW multistage slagging combustors that were symmetrically positioned at opposite sides of the furnace. The walls of the combustion chamber used turbo-membrane construction. The rest of the plant included a spray dryer absorber, a baghouse, ash handling facilities, and a steam turbine and generator. 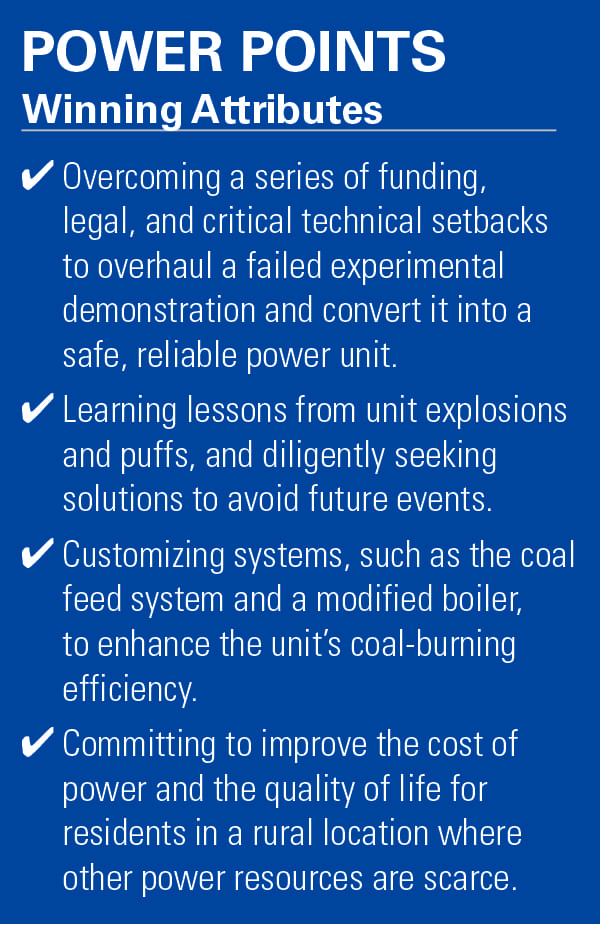 While complex, that project was built in less than three years. Construction wrapped up in November 1997 at a cost of $282 million, 41% of which the DOE bore. But according to GVEA, though operations at the 50-MW Healy Clean Coal Project (HCCP) were initiated in January 1998, the project failed to clear the 90-day commercial operation test, so it was placed in “warm lay-up status” in early 2000.

Talks between AIDEA and project partners GVEA and UCM, which invested $10 million into the demonstration, to resolve monetary disputes went nowhere. In 2009, owing in part to a surge in oil prices, GVEA initiated negotiations and ultimately agreed to buy the plant. But restarting the unit was soon obstructed by another hurdle: The U.S. Environmental Protection Agency (EPA) blocked re-issuance of the project’s air permit. To avoid “lengthy and costly litigation,” in November 2012, GVEA reached a joint consent decree with AIDEA and the EPA. The agreement required GVEA to install rigorous emission controls at Healy Unit 2, with an estimated cost of up to $92 million, as well as $5 million in nitrogen oxide controls at Healy 1. The deal was crucial to avoid shutdown of either unit, said GVEA Vice President of Power Supply William Kirkenir. GVEA and UCM are the two biggest employers in the remote area, and without the units, GVEA would be forced to buy power from the grid, “which was very expensive,” he told POWER.

A Second Chance and a Series of Calamities

After 18 months of retrofitting and refurbishing Healy 2, the unit was returned to service 15 years after it had shut down. It was fired first with oil in May 2015, and then with coal in August 2015. But in March 2016, it suffered the first of two critical calamities. “When the plant was operating in a start-up condition, transferring from oil to coal, Healy Unit 2 experienced a fire/explosion in the coal feed system,” Kirkenir said. Six months later, in November 2016, despite changes and precautions, Healy 2 suffered a “puff”—a spontaneous combustion—that extensively damaged the coal feed system.

No injuries were reported, but the risk of another explosion caused great concern as high-moisture and highly reactive subbituminous coals are inherently pre-disposed to mill fires and puffs. “Previous operating data was reviewed and a site visit took place, which determined the plant suffered from extremely low coal velocities, and discrepancies in fuel piping that were allowing the low-velocity coal to settle,” said Kirkenir. GVEA moved quickly, first to consult with engineering firm Benetech and learn more about its MillPro protection solution, and then to develop a complete overhaul at Healy 2, with extensive focus on its coal feed and fuel transport system (Figure 1).

GVEA’s board of directors in August 2017 ultimately approved plans to install a MillPro system on each of the two pulverizers, as well as to upgrade the coal feed system to add dynamic classifiers. Plans also called for carbon monoxide detection in multiple areas of the fuel delivery system, and a total revamp of fuel piping from the pulverizers to the boiler.

The plan’s key goal was to identify deficiencies in the coal feed system and fix them, noted Kirkenir. The remarkable result was a redesign of the coal feed system, which was custom-designed by Richard Storm, president of Alabama-based Innovative Combustion Technologies Inc. “Rich Storm and his company looked deeper into the plant’s deficiencies than anyone previously and came up with an out-of-the-box solution,” Kirkenir said. As crucially, the overhaul also warranted a boiler combustion modification. “The experimental combustor was designed to burn [the low-quality coal] with low emissions,” he explained.

Work also entailed resizing the coal pipes to maintain minimum line velocity, and removing the ram’s horn and vent manifold, and replacing them with a dynamic classifier. That essentially “allowed online control of fuel mass flow split between combustors,” as well as “online control of fuel particle sizing to each combustor,” he said. The old pre-combustor cyclone—the smaller of the two cyclones at the plant—was also removed.

Teams installed a hybrid venturi system to correct primary airflow measurement issues, as well as a hot air blast gate for safety, and mill sweeps. GVEA also delved deeply to revise associated documentation, and in particular, its standard operating procedures, including the startup procedure to ensure an open air-path to the boiler, proper control of airflow and coal flow at all load conditions, and to ensure any piping transporting coal remained above minimum line velocity to avoid coal layout. And to ensure those procedures were followed, the company retrained personnel. Plant employees needed to “know how the fuel system works and how to control it,” Kirkenir said.

First fire of the overhauled unit began in July 2018—barely seven months after demolition of the old fuel transport system and construction of the redesigned system had kicked off. Tuning and testing continued through September, when the unit was declared commercial. An outage was taken in October to install selective catalytic cataylst, the last step in achieving the rigorous emission requirements. The unit resumed commercial operation in November 2018. So far, the modifications have operated as designed, said Kirkenir. “Since that time, there have been zero mill puffs—and definitely no explosions,” he noted.

Kirkenir pointed to diligent development, including painstaking design work to ensure the solutions fit Healy 2’s unique conditions with precision. Accomplishing the massive overhaul in such a short time is a stunning achievement, despite the region’s brutal climate. “One of the biggest challenges was working through the winter months, which has only a few hours of daylight, temperatures averaging –25F—with a few days at –40F—and occasional winds coming through the mountains at up to 80 miles per hour,” he said. Logistics was also a huge factor in meeting time schedules. “Some items were shipped in by truck through Canada, and bulk items came by ship from Seattle to Anchorage, then to Fairbanks, and finally Healy,” he said.

The end result has been fruitful for a wide range of stakeholders, from UCM to GVEA and all its members, as well as for the residents of Healy. It may have a larger significance for other coal operators too. “The lessons learned at Healy may assist others in the use of low-quality coals,” Kirkenir said. POWER’s editors agree: For ingenuity and determination, and for overcoming a barrage of challenges to refurbish a unit that is essential for regional power reliability, Healy is a worthy winner of this Top Plant recognition. ■