The atmospheric vortex engine exploits the natural energy content of the vortex produced during upward heat convection in the atmosphere. The heat source can be solar energy, warm sea water, warm humid air, or even waste heat rejected in a cooling tower. When mature, the technology — currently in the small-scale testing phase — promises to be an efficiency game-changer for fossil-fired power plants.

The atmospheric vortex engine (AVE) promises to exploit the natural processes responsible for creating hurricanes, tornadoes, and waterspouts, although on a much smaller scale. A man-made vortex reaching miles into the sky would act much like a very tall chimney, where air density and temperature effects can be harnessed to produce electricity from low-energy content gases, such as those rejected from a cooling tower.

Cooling towers are commonly used to transfer waste heat to the lower atmosphere. By rejecting 1,000 MW equivalent of waste heat to the upper atmosphere instead of at ground level, it is possible to generate an additional 200 MW of electrical energy, thereby increasing the electrical output of a plant by 40%. The AVE increases the efficiency of a thermal power plant by reducing the temperature of the heat sink from +30C at the bottom of the atmosphere to – 70C at the tropopause, which is the atmospheric boundary between the troposphere and the stratosphere. The AVE system replaces the cooling tower; outwardly it would have the same appearance (Figure 1). 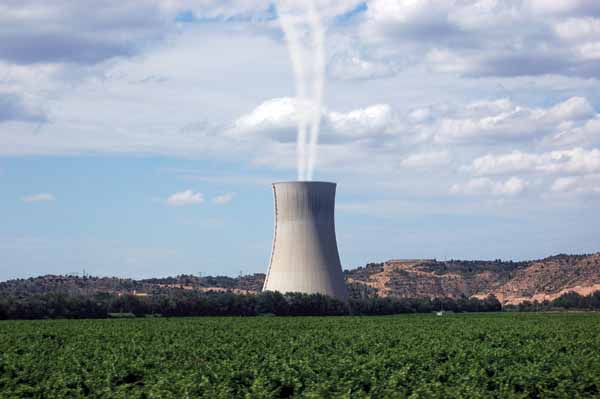 1.    Power from a tamed tornado. Photo of a cooling tower touched up to show the appearance of a future atmospheric vortex engine. Source: AVEtec Energy Corp.

From the inside, an AVE will look like a large circular, open-roof structure with a vortex firmly anchored at its center. Figure 2 shows how a natural draft cooling tower could be altered to create a controlled vortex. Warm air enters the area within a cylindrical wall, called the arena, via tangential entry ducts, giving the air a swirl and producing a vortex. An AVE with a diameter of 200 meters (m) and a height of 50 m to 100 m would produce a rising air column (the vortex) with a diameter of 30 m extending up to 15 km into the atmosphere. The mechanical energy is produced in peripheral turbo-generators generating 200 MW of electrical power for an AVE that is the size referenced above. Wet or dry heat exchangers similar to those used in cooling towers are used to heat the air. 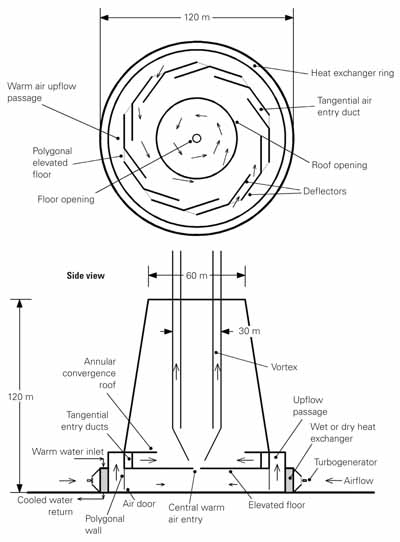 The AVE has the same thermodynamic basis as the solar chimney. A solar chimney consists of a tall vertical tube surrounded by a solar energy collector. The 200-m-tall Manzanares prototype solar chimney built in Spain in the 1980s operated successfully for seven years and had an electrical output of 50 kW. The work of buoyancy was transferred to a vertical axis turbine located at the base of the chimney. The draft at the bottom of a natural draft chimney is proportional to the difference in temperature between the rising warm air and the surrounding ambient air and to the height of the chimney.

In the AVE, the wall of the physical chimney is replaced by the centrifugal force produced by the vortex, and the solar collector is replaced by natural or waste heat. Not constrained by the physical limitations of a chimney, the vortex diameter adjusts itself until the radial pressure differential is in equilibrium with the centrifugal force produced by the spinning vortex. The vortex transmits the draft produced by the warm buoyant air above to the turbines below. The vortex chimney goes up with the rising air and is continuously replaced from the bottom. In essence, the chimney and the rising air column are one.

An AVE using waste heat should self-start. Steam injection could be used to help start the AVE using natural heat sources. Once the vortex is established, the pressure difference between the surrounding ambient air and the reduced pressure at the base of the vortex becomes the driving force to spin the turbines. The airflow is controlled with dampers located either upstream of the heat exchangers or within the tangential entry ducts. An annular roof with a central circular opening forces the air entering the arena to converge, thereby forming a vortex with a diameter somewhat smaller than the roof opening.

Figure 3 shows a small vortex produced in a pilot plant. The 0.4-m-diameter vortex extended up to 15 m in the free atmosphere above the 3-m-high plastic cylinder. The deflectors were located in a 1-m-high by 4-m-diameter base unit located under the plastic cylinder. Four 20-kW propane heaters were used to warm the air 20C above ambient; the vortex was made visible with smoke emitters. 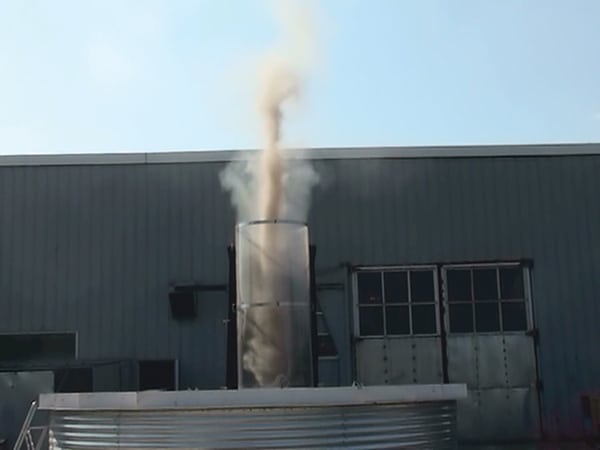 The energy of hurricanes is mainly a result of sea-to-air heat transfer from water spray. Spray droplets are cooled to their wet bulb temperature by evaporation before falling back into the sea, thereby transferring a huge amount of heat from sea to air. The heat transfer mechanism is the same as in wet cooling towers; in both cases the heat transfer can be in the order of 50,000 W/m 2. The temperature and relative humidity of the air rising in the eyewall of a hurricane are typically 24.5C and 97% respectively. Saturated air at 24.5C can be produced by spraying 26C water in air. Eyewall sea surface temperature (just outside the eye of a hurricane, where the strongest winds are) is typically 26C. Tropical sea surface temperatures can be as high as 32C.

In a vortex, turbulence is inhibited because when a particle of air moves inward, its tangential velocity increases to conserve angular momentum. This produces an increase in centrifugal force, which in turn pushes the air particle outward. As a result, the flow in the vortex is laminar instead of turbulent, as shown by the smooth thread shape often observed in waterspouts. Centrifugal force stabilizes the flow, thereby reducing turbulence and friction losses. The rising air is like a spinning top being raised; there is little decrease in the angular momentum of the large mass of rising air in the time required for the air to rise from the bottom to the top of the troposphere. The kinetic energy of the spinning air is recovered as the vortex diverges at its upper end.

In the AVE, the gas expands as it rises and is compressed as it descends. Compressing subsiding air is extremely efficient; it only requires piling more air on top of the subsiding layer. The AVE’s heat-to-work conversion efficiency corresponds to the efficiency of a Carnot engine, where the hot source temperature is the surface temperature and where the cold source temperature is the tropopause temperature. Approximately 35% of the heat received at the surface is converted to work during the convection process regardless of whether the heat is received as sensible or latent heat.

Based on specific work of 10 kJ/kg of air, a 200-MW vortex engine will have a heat input of 1,000 MW (remember, this is waste heat) and airflow of 20,000 kg/s. In a vortex engine with 20 peripheral wet heat exchangers, the work and heat duty per sector will be 10 MW and 50 MW respectively. Each sector will have a single 10-MW turbine with a diameter of 5 m. The cost of power could be as low as $0.03 per kWh; there is no fuel cost. The AVE concentrates the work produced from heat received over a long period of time and over a large area in a small location, producing a high-intensity energy source.

An AVE will have advantages over the cooling towers it replaces beyond power production. An AVE will be shorter than a natural draft cooling tower and therefore easier to maintain. Air dampers in the tangential entry duct will permit maintenance of individual cooling cells and turbo-generators without shutting down the whole plant. The temperature of the cooled water will be lower than with conventional cooling towers, which will improve fossil plant operating efficiency. Maximum power production will occur during periods of high solar radiation, when the power is most needed. Placing an AVE on a thermal power plant is very attractive because the heat is already concentrated at a temperature 10C to 30C higher than ambient temperature.

The water production benefits would be invaluable in dry climates. Based on a precipitation rate of 12 grams of water per kilogram of air, the resulting precipitation would be 240 kg/s. The precipitation produced by a 200-MW vortex power station would cause rainfall of 2 mm/d when spread over an area of 10 km 2. The horizontal extent of the cloud cover in the downwind direction could be 20 km. The precipitation produced by an AVE is small compared to natural storms. Airplanes could easily avoid the small, highly visible vortex in a known location. An AVE may reduce the likelihood of natural storms by reducing the heat content of surface air in its vicinity.

The AVE has the potential to produce large quantities of carbon-free energy because the atmosphere is heated from the bottom by solar radiation and cooled from the top by infrared radiation. There is a potential of converting and capturing 12% of the heat carried upward by convection and converting it to electrical energy. This is equivalent to 3,000 times current world electrical energy production. The heat released in cooling the 100-m-deep layer of tropical water by 3C is 20 times the heat in the world’s remaining oil resources. The AVE provides a system for converting 10% to 30% of this heat to useful work.

The AVE also has potential for greatly reducing CO2 emissions. The output of a power plant could be increased by up to 40% without increasing CO2 emissions; alternatively, the existing output could be maintained, but with 20% less emissions. There is a potential for further CO2 reduction when the heat content of the lower layers of the atmosphere or of naturally warmed water are used as the heat source. The AVE can be turned off at will and therefore is far safer than other global warming mitigation proposals.