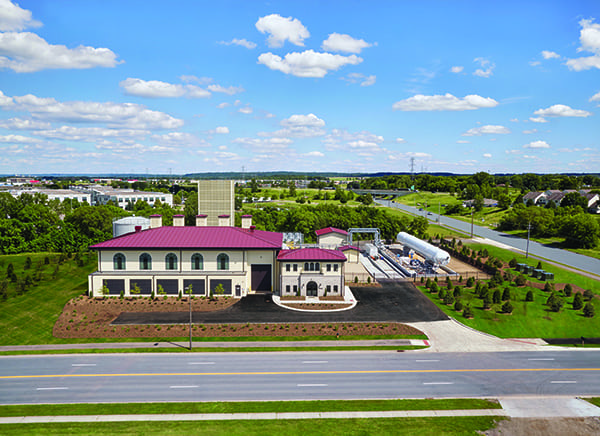 Nestled near the center of Shakopee, Minnesota, is the Minnesota Municipal Power Agency’s (MMPA’s) Shakopee Energy Park. The plant, a 46-MW natural gas-fueled reciprocating engine facility, powers the city of 40,000 and contributes to the overall power supply of 11 other MMPA member communities.

To address growing power needs in a Minneapolis suburb, Minnesota Municipal Power Agency (MMPA) had to get creative. The utility not only wanted to add clean, efficient generation to its portfolio, but also, due to the plant’s intended location embedded in the community, the utility had to make several other considerations. The plant needed to be attractive and run quietly.

“Shakopee Energy Park [SEP] is part of MMPA’s commitment to clean, efficient power generation,” said Derick Dahlen, president and CEO of MMPA’s management partner Avant Energy. “We wanted to make sure SEP fit aesthetically into the community and wouldn’t cause noise issues for people who live nearby. We spent a considerable amount of time designing the building to ensure neighbors wouldn’t hear the gensets, and we’ve been very pleased with the results.”

MMPA did such a good job designing the plant to operate in the center of the community that “[w]hen speaking with residents, I’ve been told that they did not even know that we were up and running because they didn’t hear a thing,” John Crooks, Shakopee Public Utilities manager, said. The facility uses silencers on each engine and it was constructed using sound absorbing building supplies to prevent noise from reaching the surrounding community.

This is just one of the reasons the Shakopee Energy Park is one of POWER’s top natural gas plants for 2017.

The Shakopee Energy Park uses five 9.3-MW Wärtsilä fast-start, fuel-efficient reciprocating engines to produce energy for the MMPA member communities. Using this fast-start technology, the plant can start up in just a few minutes, making the plant an important complement to intermittent renewables. 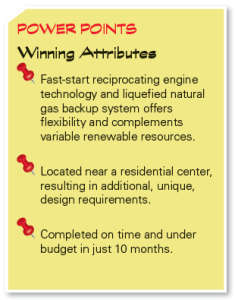 MMPA’s energy portfolio currently consists of 17% renewable energy generation, with an intention to increase to 25% renewables by 2025. The group’s portfolio currently includes two wind farms, a biomass facility, and three natural gas facilities, including the Shakopee plant. A solar installation is currently under development as well.

The development of the plant is the result of a successful team effort. The plant is owned by MMPA. The agency is composed of 12 Minnesota member municipal utilities including the cities of Anoka, Arlington, Brownton, Buffalo, Chaska, East Grand Forks, Elk River, Le Sueur, North St. Paul, Olivia, Shakopee, and Winthrop. SEP supports the overall power supply of the agency. MMPA is managed by Avant Energy, a Minneapolis-based energy management company with years of experience in the electric power industry.

Shakopee Public Utilities (SPU) designed and constructed the infrastructure for the plant’s interconnection to SPU’s substation and also provided support during commissioning.

“We worked very closely with the city and local authorities to carefully coordinate major equipment deliveries. Our deliveries of major equipment occurred during the middle of the night, so there would be minimal impact to the surrounding community,” said Dave Urke, construction site supervisor at Avant Energy.

Urke noted, in particular, the delivery of the LNG tank. The tank had to be transported 22 miles from the factory. Transportation and setting of the tank took 10 hours. “Crews commenced work at midnight and tank setting was completed by 10 a.m. the next morning. Equally impressive, the hoisting on site by a 550-ton crane and a 450-ton crane to its final installed location took 14 minutes from trailer to concrete piers,” he said.

Beyond its unique design requirements, the plant is also unique in that it uses LNG as its backup fuel. The project team decided to incorporate LNG in lieu of a firm gas contract. In short, the plant’s primary supply of natural gas may be curtailed during times of high regional demand, such as very cold winter days, which are all too common in Minnesota. If this occurs, the facility can operate on LNG by vaporizing the LNG to its gaseous state. Through this process, the engine performance is the same as when operated on the primary fuel supply.

The LNG is stored in a 99,000-gallon tank. The LNG housed in the tank provides enough fuel for the plant to operate for around 22 hours at full capacity. “This unique fuel approach allows the Agency more flexibility in its operations strategy,” according to MMPA.

MMPA and Avant are particularly proud of the plant’s contribution to the local community.

Shakopee has been attracting large companies, such as Amazon and Shutterfly, in recent years, increasing the demand for reliable electricity access. The city is also home to an amusement park and a horseracing track, which is located directly to the north of the plant. By connecting the energy park directory to the local distribution system, MMPA was able to increase electric reliability for these businesses.

“This facility is a great support to our local distribution system and helps ensure reliability on our system, which is especially important to many of the businesses in our community,” Crooks said.

The plant is also a part of MMPA’s Energy Education Program, which has provided learning opportunities for nearly 13,000 elementary school students through in-school assemblies and tours since 2010. An effort was made to use local contractors and businesses, such as Greystone Construction, in the construction of the plant, helping create local jobs.

The plant was opened to the public for a grand opening on August 1, 2017 (Figure 1). During the dedication ceremony, Dahlen said, “Shakopee Energy Park is good for every MMPA community because it provides power supply flexibility and protects our members against price volatility in the marketplace.”

“The facility is a great addition to our growing community,” Shakopee Mayor Bill Mars said. “Shakopee Energy Park provides our residents and businesses with [a] long-term, efficient, competitive, and reliable electrical supply, which is delivered by Shakopee Public Utilities. In turn, our community’s future economic development and sustainability goals are supported.” ■