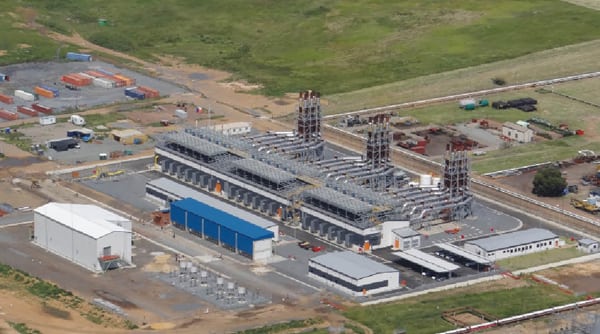 High altitude, an unreliable national grid, and the need to dramatically cut carbon emissions meant a demanding set of requirements for South African chemicals manufacturer Sasol when it came to choosing a power-generating technology for its alternative fuels facility. Finnish supplier Wärtsilä met the challenge with a new 175-MW gas engine plant delivered in just 18 months.

Once flush with cheap electricity, the Republic of South Africa has recently been beset by power shortages and reliability challenges as a result of decades of underinvestment in its electrical infrastructure. Though the country is well-supplied by African standards, demand is still rising faster than Eskom, the state-owned company in charge of generation and transmission, can meet it. Reserve margins are usually in single-digit range and often drop into negative values.

The country has long been heavily dependent on its abundant coal reserves, which currently provide about 75% of its electricity. That means South Africa is also a major emitter of greenhouse gases (GHG) and pollutants. A government initiative begun in 2010 is making a strong push to shift toward cleaner generation resources.

Because of the unreliability of the national grid, many major consumers generate their own electricity or at least have backup capacity in case the grid goes down. Sasol, one of the country’s largest industrial companies, specializing in chemical manufacturing and alternative fuels, has operated a coal-fired power plant in the city of Sasolburg since the 1950s. The plant—and the town itself—was built to support Sasol’s coal-to-liquids facility.

A need to upgrade the project to support future growth, plus a corporate drive to reduce Sasol’s substantial GHG emissions and increase its energy efficiency, led to a decision in 2010 to replace the coal-fired plant with one fired by natural gas. Though natural gas is relatively expensive in South Africa, the greatly reduced emissions and higher efficiency offset the higher fuel costs. A subsidiary, Sasol New Energy (SNE), was formed to oversee this and similar projects.

In planning the new plant, SNE had to take into account several challenges of the location. The site is located at moderately high altitude (1,700 meters) in a dry climate with large seasonal temperature swings. This meant SNE needed a highly flexible generation resource capable of operating across a wide range of ambient conditions. The unreliability of the grid also dictated the need for rapid, efficient load-following capability and 100% availability. Between the altitude and the reliability requirements, gas turbines proved not to be the most suitable option. Only a multi-unit gas engine plant met all of SNE’s needs.

SNE approached Finnish company Wärtsilä to build the plant because of its long track record with gas engine power plants in developing regions, including Africa. Wärtsilä has successfully delivered more than 450 power plants across the continent and can support those facilities though its extensive service network.

Wärtsilä proposed a plant using 18 of its workhorse 10-MW, 20-cylinder 34SG engines, which are in service around the world in similar roles. Worldwide, the 34SG has a total installed capacity of 5.35 GW, making it a proven, time-tested solution. The 34SG is able to operate at rated power despite the altitude, and its closed-loop cooling system means water requirements are minimal. Individual engines can be brought online or shut down as needed, meaning the plant can operate at peak efficiency across its entire output range.

What Sasol wanted would be the largest gas engine plant ever built in Africa and the first in South Africa, but the modular nature of a project built around the 34SG meant scaling up the output would still deliver a highly standardized product. The plant was ordered as a turnkey project, with Wärtsilä performing all engineering, procurement, and construction, as well as supplying all electrical and mechanical equipment.

The project schedule was one of SNE’s primary concerns. A fast, on-time delivery was important to support the overall project because of the local electricity situation. A firm, fast schedule was possible because of the standardized nature of the power plant, which allowed for the use of standard components and modules that were purchased from suppliers having preexisting agreements with Wärtsilä.

The contract was signed in July 2011, and Wärtsilä broke ground in September. The first engine start was a little more than a year later in November 2012, and the 175-MW plant entered commercial operation at the end of December, nine days ahead of schedule. The facility was officially inaugurated in a ceremony on July 10. Construction and commissioning lasted 15 months with a total of 1.4 million man-hours worked. Key project milestones are given in Table 1.

Sasol is well known throughout South Africa for its high health, safety, and environmental standards, and meeting those standards was a key requirement. Wärtsilä employed a dedicated safety and environmental manager at an early stage of the project to incorporate requirements set by Sasol and South African regulations into its project manual. Wärtsilä and its subcontractors were fully committed to on-site safety, and extensive instruction and training were conducted to ensure an injury-free workplace.

Communication and interaction with the local community was key to ensure that all stakeholders would benefit from the project. This required a good understanding of the local labor laws and regulations.

Wärtsilä employed as much manpower from the Sasolburg area during the project as possible. Total manpower peaked at 750, 70% of whom were local employees. Because labor unrest is unfortunately fairly common in South Africa, Wärtsilä employed an industrial relations officer, who conducted weekly meetings with contractors and labor unions, and reported to Sasol and the South African Department of Labour. This commitment resulted in a good relationship with the unions and a strike-free project.

The plant building is divided into three sections, with each set of six engines having its own exhaust stack (Figure 1). Currently, only about half the output is used by Sasol’s operations, with the rest being sold to the national grid. Though designed for simple-cycle operation, provisions were made for adding a heat recovery system and steam cycle at a later date. Space has also been reserved for adding additional gensets should the need arise (Figure 2).

The new plant is operated and maintained by Wärtsilä under a three-year agreement. That agreement includes the training of local employees of SNE.

“This plant is a significant milestone for Sasol, as we begin to ease our load on the national grid and contribute to our own energy efficiency targets,” said Sasol Senior Group Executive Lean Strauss. “We are proud of this new facility, which demonstrates how we can add versatility to natural gas.”

“This inauguration marks a significant step forward for power generation based on gas fuel,” Tony van Velzen, Wärtsilä’s African regional director said. “Never before has a power plant of this size running exclusively on gas engines been installed on the African continent, and we see this as an important achievement on the road to cleaner and more efficient electricity production. We are proud to have worked closely with Sasol to develop this highly efficient and environmentally sustainable facility.” ■